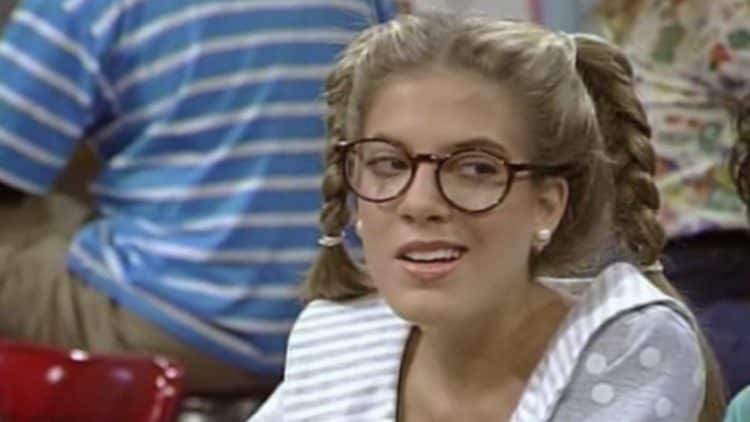 If you even had to guess why the character of Violent Ann Bickerstaff disappeared from Saved by the Bell it might mean that you weren’t even born yet when the show last aired or were too young to remember the initial rise of Beverly Hills 90210. It’s either that or like a few people you might not have cared that much. But the point is that Violet kind of rounded out Screech’s character on Saved by the Bell by giving the nerdy sidekick his own balancing point since Zach and Slater often had their own things going with the ladies while Screech tended to be the good friend but never really moved out of that zone. But as anyone that knows anything about Tori Spelling would tell you, being the geeky girlfriend of Screech, who didn’t do much after Saved by the Bell, versus being one of the most popular teens in a drama produced by her father wasn’t even a contest. In fact, one could even go so far as to state that Tori was running for the role despite the fact that her father likely would have held it for her. But unfortunately, this meant that Violet’s departure kind of left Screech in the lurch once again and without a female companion to really balance him out and make him more than just a caricature. Somehow it doesn’t feel that this would have made much of a difference, but it does explain the reason Violet left.

Some question the reason that Spelling is still famous to this day but it does have a lot to do with the fact that she was pushed in such a way that people responded in a positive and negative manner, as there are plenty that still think that she’s talented and has earned everything while there are those that believe if not for her father her fame might have died off long ago. To be fair a lot of people are in the right by thinking what they will since it is kind of a mystery why Tori was ever that famous, to begin with considering that she’s not that great of an actress and she’s continued to prove this throughout the years by trying to be a pretty face and not much else. But the fan base that she’s amassed isn’t too surprising since it doesn’t take much for fans to fawn over someone that they’re told to think is popular. The funny thing is that if she’d stayed with Saved by the Bell she might have never done much more in terms of acting and would have been relegated to being a producer’s daughter and not much else. But whether it was Aaron pushing her into the spotlight or Tori claiming that he was pushing her while she was eagerly claiming the spot it doesn’t matter since the character of Violet was a there and gone type of personality that a lot of people likely don’t remember these days.

Think about it for a second, the most popular characters on the show tended to take up a lot of time and a lot of attention, meaning that anyone else that tried to vie for that same attention needed to be rather talented or a big deal in a very natural way. Can anyone honestly say that Tori has been either of these things throughout the entirety of her career? In truth, her last really amusing moment came during Scary Movie 2 when she was shown to be the clingy student that had a thing for the ghost that was haunting the mansion where the movie took place. That’s right, her best appearance was in a spoof movie that saw her as a supporting actress and not much else, bringing up a spot behind the rising star that Anna Faris was at the time while being overshadowed by the Wayans brothers, Shawn and Marlon. Is anyone else getting the point? Tori has rushed headlong into stardom more than once and while she had her father to help her out with 90210 she’s faltered quite a bit since then considering that she’s had to work for it and had to make certain that people still see her as someone that’s worth talking about. The character of Violet has likely been relegated to the archives in a big way at this time and bringing it back up for a breath of fresh air is a reminder that Spelling really hasn’t gone much of anywhere after 90210, despite all arguments to the contrary.

You might say poor Screech, but looking at how Dustin Diamond has turned out it’s probably better that we remember Screech as he was onscreen and just remember that at one point the character had someone that could make him happy, at least for a little while.