Home
Television
This Is Us
This Is Us Review: This Big, Amazing, Beautiful, Interconnected Life 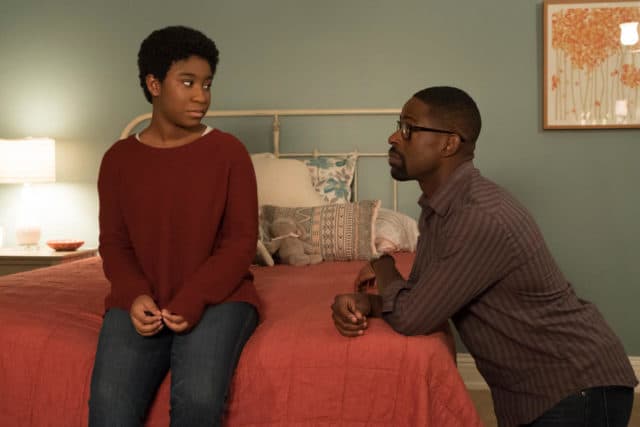 Randall had it right. This big, amazing, beautiful life is filled with more hope than we like to let in sometimes. It’s hard, because it’s easier to focus on life’s hardships. There are many. But every once in awhile, you have to let in the hope. That’s the lesson in this week’s This Is Us, which focuses on Deja. As Deja and her mother grapple with an uncertain future, it’s our opportunity to learn more about her past. I’ve said it before. You can’t make assumptions about someone’s past, or future. You can also never truly know how interconnected our stories are. But that is what this particular episode reminds us.

The first 10 minutes was just the beginning of showing just how interconnected this episode is. Though Deja took focus from the beginning, this week’s editing beautifully portrayed how everyone’s lives intertwine. Every baby born, every first step, every morning breakfast, every kiss goodnight after a reading of “Goodnight, Moon.” These are routines that connect us as human beings. Then the bad stuff happens, and we have to work a little bit harder to hold onto the good.

Deja was born to her mother Shawna when Shawna was 16 years old. It was tough, but at least they had Shawna’s grandmother. When she passed, Deja took up the mantle for her scared mother, by once again, reading “Goodnight, Moon.” From that moment on, Deja instinctively knew that she wouldn’t have a carefree life. She and her mom would be a team. And they did okay. Maybe Shawna wasn’t there 100% of the time, but Deja grew up to be a good girl. They were happy, they were safe. One bad cooking accident changed all of that.

Suddenly, Deja was ripped from her home, and her mother started using drugs to cope with the loss. Deja was tossed from one abusive home to another, until she was able to reunite with her mother. Even when Deja got back to her mother, things were never the same. Shawna had a terrible boyfriend. There were always men and fighting in the house. It was never safe again.

It’s no wonder that by the time Deja got to Randall and Beth, she was so shut down. They didn’t know what she had been through, that things had been okay once, and that they really could be again. And they were, for awhile, until Shawna paid her ex-boyfriend’s bail. Deja knew then she’d have to do something desperate to make ends meet, but there was one thing she couldn’t do. Deja could no more part with her great-grandmother’s brooch than Kevin could have parted with his father’s necklace. And this is how Beth and Randall found Deja and her mother sleeping in the car.

What could they do but bring Shawna and Deja home with them? For the first time, Shawna sees her daughter carefree. Deja’s at peace, because she just feels that things are going to be okay with the Pearson’s. As Randall comforts an exhausted Deja, Shawna makes the heart-wrenching decision to let go of her daughter. If Deja can have the chance to just be a kid, she deserves to do that.

So the Pearson family gets a new member, again. Going into Kate’s season finale wedding next week, there is one Pearson whose presence will loom large. I’m not going to lie. The promo already had me in tears.

This Is Us Season 2 Episode 17 Review: "This Big, Amazing, Beautiful Life"

This Is Us delves deeper into Deja’s past, and how it will inform her future with the Pearson family.