Home
Movies
Drama
The Movie Crossroads Could Use a Reboot 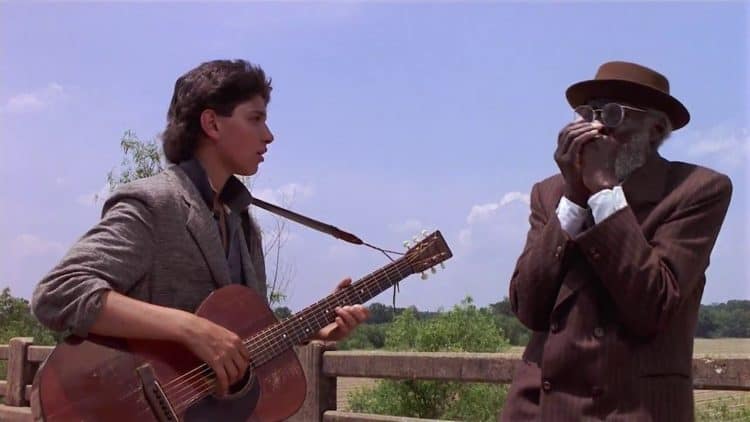 How many people even remember Crossroads? The 1986 movie starring Ralph Macchio and Joe Seneca as two musicians at different stages in their lives wasn’t something that managed to stand the test of time when it came to the memories of many film lovers. But the story, despite being claimed to borrow from many other movies, was still sound since Eugene, played by Macchio, was portrayed as a young musician who goes on a quest for a legendary musician that was said to have sold his soul to the devil for his talent. When he finds Willie Brown he goes on a personal adventure that helps him to grip the idea of the Blues and to gain a greater understanding of what the musical genre was really about from a personal level. But when he ends up stating that maybe sell his soul for further talent, Willi takes issue with this and slaps him for even thinking such a thing. Musicians are, for all intents and purposes, just human beings like anyone else, but a lot of times there is the thought that they exist on a different wavelength than many others. This movie helps further that thought since what a musician is willing to give to their quest to become famous is different for everyone.

A reboot of this movie might be kind of a tough sell to be fair, since well over three decades later it might be that this movie might need to be totally revamped to accommodate the current era. An update would be necessary no doubt, but keeping the basic idea of the story would be best since the idea of what a person will give to get what they want usually becomes a great way to build a story into a tale that people will want to watch. It might even be fun to see Ralph Macchio step in for a cameo if he could be convinced to come back for a few scenes.

But again, getting people interested in this idea would be tough since it would have to be given a different feel and appeal to those that might want to work on this project, since watching the movie in this day and age might give the feel that Eugene’s quest might need a bit more of a punch to make it worthwhile. There’s a reason that this movie hasn’t been held up as an example in other movies for so long, and it’s very likely that as fun as the idea is and as possible as it is that some folks still see this as a memorable movie, it simply didn’t capture the attention of the people due to the delivery of the story. A young man on a quest to find his musical talent isn’t exactly something that pulls at the heartstrings unless there’s a goal that is a lot more interesting and requires a great deal of sacrifice. It can be argued that Eugene’s quest is worthy of notice, but at the same time, the movie doesn’t really bring forth any true sense of conflict since even during the final musical standoff, Eugene and Willie don’t project the kind of fire that one might expect of those that are playing to save their souls.

But that could be poor directing and poor writing since the duel was kind of entertaining, but it felt like something was still missing. If a reboot of this movie were to come along then it would have to find the key components of the movie and lean into them a little harder to create a sense of urgency within the story. Scratch, the devil in this instance, was fairly menacing in the movie as his wide, toothy smile was a bit intimidating, and his manner was enough to make a person think that this was a character who was not to be messed with. But at the same time, a reboot would need to act accordingly and push certain scenes in a manner that would make it clear that at one point or another in the movie, things are bound to get serious, and that there’s extra meaning at those given moments. The story of meeting at the crossroads to make a deal with ol’ Scratch is one that’s been used in several stories throughout history in one way or another, but this story could bring that back in a significant way that might reach people in a manner that a lot of people might respond to in a positive manner.

It would be a long shot, there’s no doubt of that, especially since this movie hasn’t been given a lot of thought since it came out. Back in the 80s, it might have been given a glance before it was filed away with the rest of the titles that many have forgotten. But out of the many movies that have been kept in the archives, this feels like one that could be brought back to life and given another chance to shine.