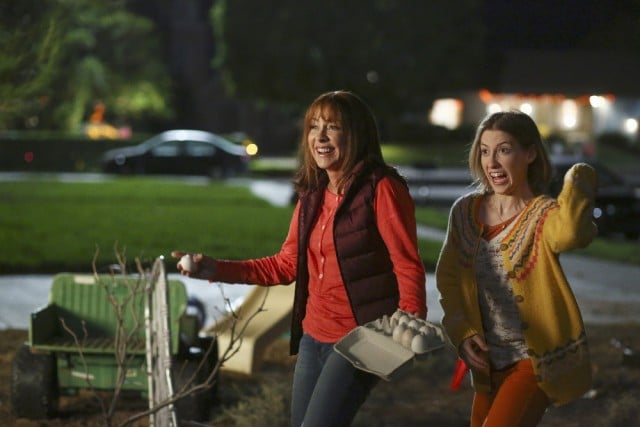 Complete with Brick dressed as Rod Serling, The Middle delivered a fun twist on its annual Halloween episode told in the vein of The Twilight Zone.  Rita Glossner also returned to terrorize the neighborhood, making this one scary episode indeed!

Frankie and Sue try to spice up their boring night of handing out candy to trick-or-treaters by trying out Kelly Ripa’s advice of a fire pit out on the front lawn.  Supposedly, Kelly told an anecdote about doing this with her daughter but I would imagine Kelly wasn’t drinking wine straight out of the box like Frankie.  By the way, Sue only returned home for the holiday because she wanted to have a night that didn’t involve alcohol.  It’s only a matter of time before Sue goes to her first college party, right?

The turnout of trick-or-treaters is far from what they expected, but I have to say that it’s very realistic nowadays to see more and more obnoxious teenagers walking around for free candy.  Funny thing is I live in a major city – I wouldn’t have expected that from Orson, Indiana!  Anyway, Frankie definitely took her rage at Rita Glossner too far.  It’s not her fault she’s stuck as the only female in a house of testosterone, but lately Frankie can absolutely sympathize.

Speaking of a house of boys, Axl and his roommates are still crashing at the Heck home.  It’s unclear if they’ve actually tried to get new housing on or off campus.   Judging by the conversation between Axl and Hutch about letting his mom continue to mother them, they were perfectly content to take advantage of his parents’ generosity for as long as possible.  Frankie and Mike owe Brick’s girlfriend Cindy for finally giving Axl and company the kick in the butt to finally get out of the house.  Her Grim Reaper costume was pretty great.  The spooky twist in their story was actually seeing Kenny’s face and hearing him speak for once in three years since we’ve met him now!

In the last chapter of the episode, we saw a glimpse of Brick’s future when he meets an elderly woman who recognizes his costume as Rod Serling.  He’s always had the best and most eccentric costumes, and it’s often only an older person who befriends him over it each year.  His newest friend is also named Cindy, as in the girlfriend for whom Brick is currently doing all this trick or treating.  She has a painting in her foyer that looks eerily similar to Brick at his current age.  Through talking to his new friend and hearing of her and her husband’s two libraries in their house, Brick believes he’s a time traveler.  His reassurance to Mike that he doesn’t have to worry about his future anymore had me cracking up.  I would love to see Brick try to visit this house again and be unable to find it after Halloween.  That, or when the time comes for the series finale, have a huge time jump to show that really is Brick and Cindy still living in Orson.

What did you think of “Halloween VI”?