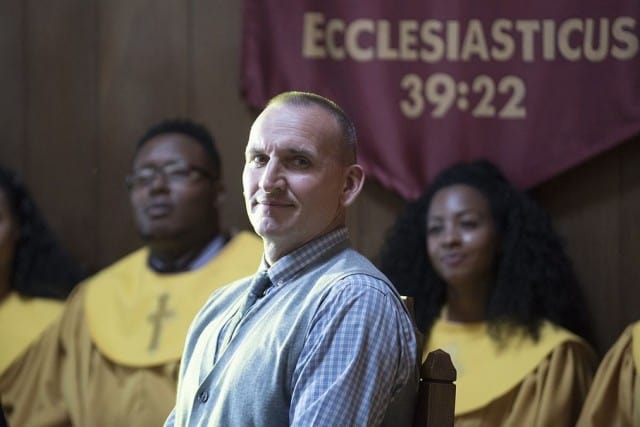 This week’s Matt and Mary-centric episode of The Leftovers is an enlightening look into the desperate measures people will take to get into Miracle.  The eccentric people just outside of town in the campgrounds are certainly a strange group.

They only left town to visit a doctor in Austin for an update on Mary’s condition.  We already know Matt is a patient man, but this was a real testament to how strong his beliefs are in both God and his wife.  He spends every day taking care of Mary and even monitoring her movements at night while he sleeps with a night vision camera.  Her blood work reveals she’s pregnant – a personal miracle for the couple under normal circumstances since they believed she couldn’t have children.  Of course though, Mary’s comatose condition raises a red flag to the medical staff that this also means she could never have given consent and implies Matt took advantage of his wife.  I believe Matt that this only occurred their first night in Miracle when she was awake for several hours.  Tell that to Kevin, John, and all the other doubters that there are no miracles in Miracle!

Mary speaks to Matt, or so he imagines, after their wristbands are hijacked by a desperate man and his son.  In this hallucination, Mary stresses that she’ll lose the baby unless they get back into Miracle.  They have no other option but to walk the five long miles towards town, but without their wristbands to prove they are residents, they aren’t allowed back in.  They’re held up outside in the visitors center where Kevin and John show up to vouch for them.  It’s hard to believe the cops checking cars at the entrance don’t require wristbands and their IDs to match.

Matt’s definitely used to taking his fair share of beatings from people by now.  His hand was broken by the savage who stole his wristband, then he’s on the receiving end of an attack from a very impatient visitor.  He finds himself on John’s bad side when he learns about the pregnancy.  In order to help him back into town, Matt has to swear to John that when Mary starts to show in a few months, he won’t even try to explain to people that she woke up.  Instead, he has to make himself the bad guy in this situation and say he was sad and lonely when this must have occurred.  But wouldn’t that mean someone could press legal charges of rape against him?  I’m not sure who would be able to do that since he is Mary’s only family.  Anyway, Matt’s big mouth got him in even deeper water when John refused to help anymore.  Why couldn’t someone from the church come to claim Matt?

Through a suspicious dealing that involves Matt delivering a beating in exchange for money, Matt and Mary can’t even get through the secret underground water sewer because of the rain.  Lucky for them, Nora’s a quick thinker.  She and Kevin successfully sneak them back into town in their trunk past a distracted security by anonymously reporting the vanished girls were spotted outside.

Call it karma, but Matt rightfully gets his and Mary’s wristbands back in the end when the father and son who stole them are found in a fatal car accident caused by goats.  Yet rather than continue back into town, Matt simply asks Nora to take care of Mary temporarily.  He voluntarily walks out of town limits into the campground again.  I get that he’s a man of God, but he should take his luck where and when he can get it!  He feels he should be punished when he should be counting his blessings.

What did you think of this week’s episode of The Leftovers?