Home
Television
The League
The League 4.06 Review – The Tailgate 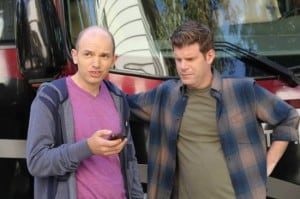 Tailgating is one of the greatest past times of football fans. The loud partying before a game can get even the meekest of persons into a frenzy or, in the case of this weeks episode of The League, it can turn two grown men into a mockumentary on par with any real documentary seen on Discovery and turn a lady (albeit a foul-mouthed lady) into a throat crushing woman.

When I saw that The League was doing a tailgate episode, I was expecting to see them inside Soldier Field at some point. Sadly this was not the case but, that just meant all the fun was to be had outside in the parking lot.Having Andre (Paul Scheer) be the one who organized the whole tailgate party is no surprise to fans of the show. Over the past few years, we all have come to know that Andre will throw a party just to have his friends like him more, even though in the end, he is the one who gets trash talked (and sometimes beat up) the most.

Of course, the under cooked meat of the episode (literally and figuratively but, more on that later) comes from the gang being together tailgating. Every character seemed to have their own little story-arc going on while partying. The biggest ones (in my opinion) seemed to be a tie between Kevin (Stephen Rannazzisi), with his impatient attitude for food and Andre, who is just trying to get away from a bully. Kevin’s story seemed a bit quick at first when fleshed out, especially when he quickly found some propane and decided to just eat his burger raw. However, one we the viewers started seeing that he had made a terrible mistake (through his expressions), it was only a matter of time before Kevin laid it all on the field, in quite a literal and disgusting way. Some how though, vomit is still funny to some viewers. Andre’s story on the other hand seemed to be a driving force for the entire episode. From the moment he wanted the restraining order on “The Seed” all the way to the two hand tackle football game, Andre seemed to be the main focus of this entire episode. While I myself am not a big fan of Andre as a character, this episode made me realize that without Andre, the gang is just a bunch of guys playing fantasy football. Without Andre to pick on, episodes would be reduced to homoerotic jokes and Ruxin’s reign of terror on the other. 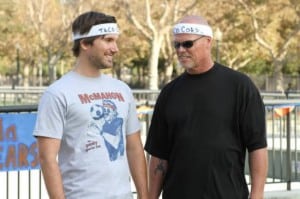 As for smaller arcs, they felt more like after thoughts this week. First you had Ruxin (Nick Kroll), who just need to use the restroom so he could do his pregame “Tinker and Stinker”. I guarantee that man fantasy football players out there have done this at some point and maybe some will even adopt this as a new ritual for themselves. You also had Taco (Jon Lajoie) trying out another fantastic idea for TacoCorp with his line of unofficial copyright t-shirts. This led Taco to eventually become friends with Pro Bowler Jim McMahon. While these stories weren’t meant to be a big part of the episode, I felt like a bit more could have been done to make these stories fit more into the main arc.

Oddly this episode had little to do with the actual fantasy football antics, which was kind of a let down as many of the best moments from the series come from the gang ragging on each other about recent lineups. While that brings the episode down a bit, the episode was able to hold strong with Jenny (Katie Aselton) taking a big hit on “The Body” and Ruxin/Pete (Mark Duplass) turning Kevin/Taco life into a hilarious mockumentary. B-

With next week being Thanksgiving, there is no new episode of The League. It will return on 11/29.