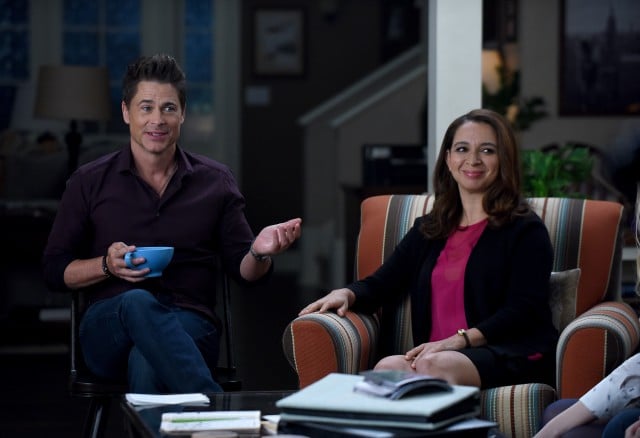 “The Ties That Grind” is far and away the best episode of The Grinder to date – just how the episode is able to balance and highlight each member of its ensemble alone is impressive, and makes “The Ties That Grind” feel like a completely different TV show. Surprisingly, it does so by not re-tinkering its tone or characters in any way; if anything, The Grinder doubles down on its meta undercurrents and over dramatic moments, its only shift being in the angle it examined these stories from. Instead of focusing the drama around Dean, “The Ties That Grind” places Stewart in the middle of the many brewing problems in his life, and is all the better for it.

One of the few things keeping me attached to this show early on has been Fred Savage’s performance as Stewart: he’s fantastic as the show’s straight man, conveying the tension and anxiety Stewart feels in every facet of his life (including the bedroom, as his horrible therapist notes) without turning the character into a dramatic construction of a person. He’s the perfect counterpart to Dean’s character, but the show’s never utilized Stewart as a prism with which to view the rest of the world through; doing that in “The Ties That Grind” opens up the show in so many exciting ways, revealing a much more clever, heartfelt show than what’s been presented in the first thirteen episodes.

“The Ties That Grind” might be the most plot-heavy episode of The Grinder, as well – and unsurprisingly, the busier The Grinder is, the less time it has to waste expounding on one-note jokes like Todd’s character or Dean’s attraction to Claire (which, along with many other frustrating elements of the season, finally get addressed when he apologizes to her, albeit in ironically creepy fashion). Pushing characters like Dean Sr. and Debbie to the forefront helps “The Ties That Grind” move and breathe in ways it never has before; naturally, this makes for a much more versatile The Grinder, which is an absolute blast to watch.

Integrating the show’s meta humor in a more subtle way also helps; instead of spending the opening scene reflecting on an ideal it doesn’t follow through on, “The Ties That Grind” uses Stewart’s perspective to generate real, plot-driven drama around Dean’s “transformation” and the lawsuit, offering more indirect fourth-wall breaks where characters are constantly telling Stewart to be less dramatic throughout the episode. Rather than a ridiculously transparent conversation about plot mechanics or audience investment, “The Ties That Grind” integrates the meta reflections into the actual plot and characters of its show – and it’s all the better for it, able to bring new depth and contour to the relationships in the show as it examines how Stewart exacerbates dramatic situations, just like he constantly scolds his brother for doing.

“The Ties That Grind” is not a ‘reinvention’ of The Grinder; in fact, all “The Ties That Grind” does is rearrange the pieces it already has, bringing them into harmony with nothing but a few tweaks and small shifts in narrative, all of which instantly gel together to create a much funnier, smarter version of The Grinder, offering a show that for once, feels like its building momentum for a story with purpose, instead of relying on the simpler, more superficial pleasures of office comedy and Dean’s self-gratification. The Grinder‘s sudden sense of introspection is fascinating – and at a critical point in the show’s first season, finally brings some sense of purpose and meaning to the show’s wandering, occasionally self indulgent first season.

With a few tweaks and twists, The Grinder’s many elements fall into place for an impressive half hour of television.