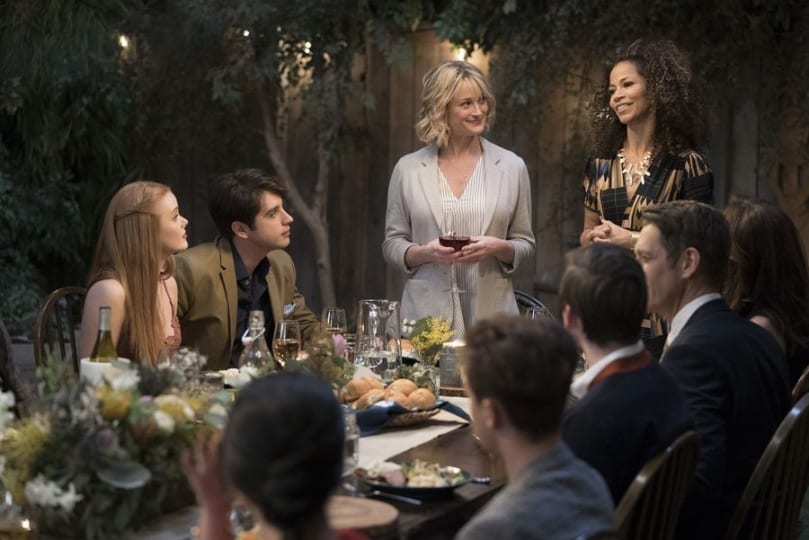 The Fosters is a rare show that has covered every current social issue imaginable, all while making us hold the Adams-Foster family dear to our hearts. How do you pen a fitting end to this enlightening, heartwarming and heartbreaking show? By jumping a few chapters ahead in the story. “Meet the Fosters”, the first of a three-night series finale event, hits the fast-forward button five years ahead. While it is a happy occasion that brings the Adams-Foster family together, the family drama is just as prevalent as it was when the kids were teenagers. What makes the finale so special is that we see the kids as full-fledged adults. Which means, of course, no one has any idea what they are doing.

A show of hands: when the series first jumped forward and revealed that Brandon is engaged, did anyone else think, “huh?” No offense to the future Mrs. Brandon Foster, but it’s tough for diehard fans to get on board with a marriage to someone brand new to the canvas. Once we learn that Eliza’s family is conservative, that feeling sticks. Did anyone else want to scream when Eliza’s mother compared fostering children to fostering a dog?! The woman even shanghai’s Brandon’s plans to have his moms perform the ceremony. Eliza is nice enough, but she just doesn’t quite fit with Brandon’s sisters. The entire Adams-Foster clan with Brandon’s conservative future family? Needless to say, there were ALOT of side glances at the dinner table.

Brandon’s life isn’t the only one who has drastically changed. A quick update on what everyone else in the family has been up to. Stef quit the force and now runs a nonprofit. Lena is the principal at Anchor Beach, but is now also on the public school board. And there is also a new addition to the family, foster son Corey. Mike and Anna are still going strong, as they are expecting a baby any day now. Jude has finished his first year at UCLA, is on academic probation, and as Callie later finds out, is engaging in some risky sexual behavior. Mariana graduated from MIT with Emma, and is planning to backpack across Europe to get away from continued drama with Mat (and all the other boys in her life). Callie now has her B.A. and J.D. from UC San Diego, and is applying to clerkships with several judges. She’s also still on very good terms with Aaron. Jesus graduated from community college and opened his own treehouse business with Wyatt, but has no idea that Emma wants to accept a job offer in India. And though their relationship survived the college years, Jesus realizes Emma would resent him if she turned down the job. He breaks up with her before it can get to that point.

Adulthood opens up a whole new world for The Fosters. The safety net is gone. The decisions they make now have lasting consequences. This comes at that crucial time when the world expects you to have a master plan for your life, and even when you do, you really have no idea what you are doing. Though the kids now have goals and a clear path moving forward, they are in many ways, where they were in the pilot-lost.

It’s not as if they aren’t trying. Further into the episode, we got some flashbacks to how Brandon and Eliza fell in love. Suddenly, it makes sense. They make sense, at least when they are isolated. But when you marry someone, you marry their family, and therein lies a huge problem. Yes, Eliza’s family obviously clashes with the Adams-Fosters. However, Eliza faces a huge obstacle as well. One week away from her wedding day, Eliza finds out about Brandon and Callie’s long-ago affair. While it was a small moment in time, the fact that Brandon told Eliza all of his romantic history excluding Callie, is significant.

The finale’s not over yet, folks. The Fosters three-night series finale event continues on Freeform.

Night One of The Fosters‘s series finale jumps forward a few years, but it may use the family’s history to set up their futures.