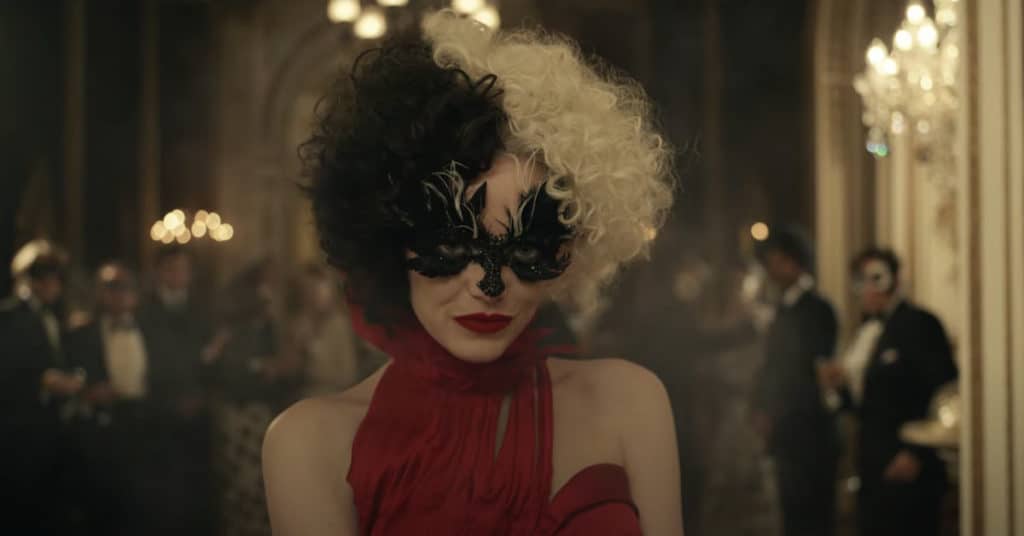 Just to give some sort of basis for this, Cruella De Vil has been shown in another light in the past when she appeared on the show Once Upon a Time. It was there that we were given the idea that being bad wasn’t always her default mode, that maybe she’d been abused as a young woman, and that being cruel was something that had been foisted upon her as a survival trait. It might be the same way in the upcoming Disney movie as well, but in this trailer, it would appear that she’s taken to the life of a villain quite easily as she might have been born bad and just needed a catalyst to let her inner evil run loose as it would appear that it does in this feature. Some are already stating that she’s “Disney’s Joker”, meaning that she has a definite maniacal lean as well as a very demented personality that allows her to excel in being bad while acting as a chaotic force to those around her. From what a lot of people remember about the character throughout the years, it’s fitting since Cruella has never really been a character that has appeared to have any type of redemption arc that might be afforded as an explanation of how she came to be this bad, at least not until her role in Once Upon a Time. Even that failed to live up to the hype after a while since her character arc weakened quite a bit as the story focused on other matters after a while. It was still interesting to see her in a different light, though it didn’t really diminish the evil she was capable of.

This version of Cruella, played by Emma Stone of all people, really looks like she’ll be embracing the full amount of evil intent that the animated character possessed so long ago. It’s bound to happen that she’ll be a little more complex than she initially appears since her customary hairstyle, which resembles the famous musician Sia (had to mention it) doesn’t even make an appearance right away. It’s curious that her story would be told since much like several evil figures in the Disney vaults, Cruella is someone that is undeniably evil and doesn’t care, in fact, she revels in it and enjoys the fact that she’s bad, intelligent, and utterly ruthless. It’s going to be intriguing to see if there’s anything else to this character that the director might want to display, especially since it’s a bit obvious that the Dalmatians in the movie have a serious issue with her, as one would expect.

One has to wonder if an attempt to humanize Disney villains is going to have the effect of creating sympathy for them, as it obviously did with Maleficent since upon looking past the tough exterior it’s very easy to think that a lot of villains are hiding scared little children at their core that was somehow abused at one point and over time learned to be cruel to block out the hurt that the world can offer. This is often a very common explanation for the emergence of a villain, but in some cases, one really has to wonder what it might have been that set villain on their path since there are plenty of villains that appear to be rotten to the core. But Cruella has been portrayed a few different ways over the years since her animated form is rather demonic in a way since she’s hell-bent on taking the Dalmatians and won’t stop for anything, which is true in the live-action movie feature Glenn Close as well. But that one TV role played by Victoria Smurfit kind of changed the whole game and made it appear that Cruella had a soft side that she didn’t let anyone see, and for good reason. It feels safe to say that if the movie does show this side that it won’t last long since for a long time now, Cruella has been one of the most rabid villains that Disney has to offer, and taming her in any way feels as though it would be doing a huge disservice to the character, and the movie as well.

The movie has an impressive cast attached to it as it utilizes such actors as Emma Thompson and Mark Strong among many other well-known names and faces. So far it looks as though this movie will be a welcome addition to the Disney name and it could very easily be an edgy but well-constructed movie that might end up being one of the better live-action additions that people will actually enjoy. But time will tell, and it’s fair to say that a lot of people will opt to be a bit critical about the movie out of habit.