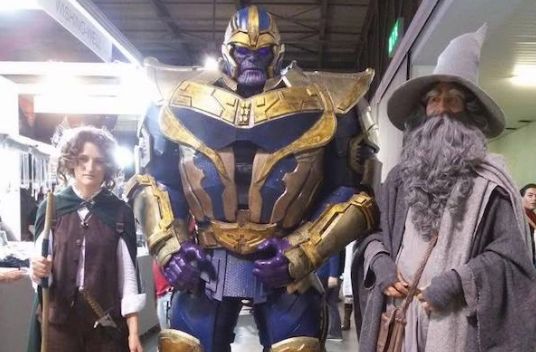 Thanos, also known as the Dark Lord by his most loyal underlings and the Mad Titan by the galactic communities, is a powerful, cosmic warlord who rules over a distant region of space and commands a massive army known as the Chitauri. His main objective is to obtain the Infinity Stones, and his desire to achieve this goal is what led him to forging deals with the villains Loki and Ronan the Accuser in their respective campaigns against Earth and Xandar.

In other words Thanos is the main villain and practically the main character in Avengers: Infinity War.  In terms of the MCU Josh Brolin also made an appearance as Thanos in Guardians of the Galaxy in 2014.   Given the imposing figure and mutant purple colored look of Thanos, it’s no surprise that people have being cosplaying him since his first appearance on the big screen (and even before that from comics).   But most people haven’t gone as full out with their costumes as Prizmatec Cosplay.

As you’ll see below this costume is massive.   Below you’ll see two videos of the imposing figure but you’ll also catch a third video of how the costume was made.  I must say this is quite impressive hence why I call this Thanos Cosplay the “one to rule them all.”