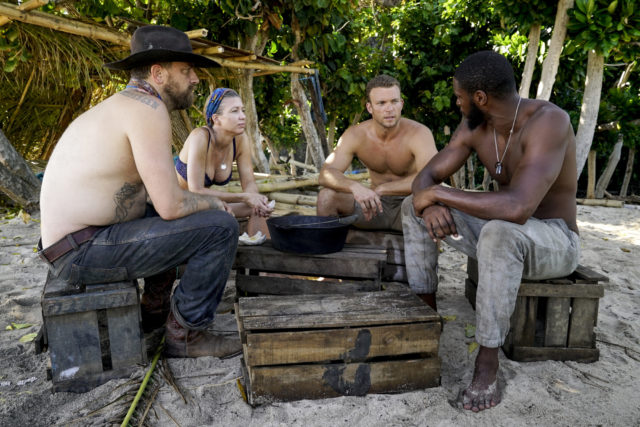 “Survivors” is back and after a month of teasers and pre-season hype, we were at least familiar with the 18 cast members who would compete as “Heroes, Healers and Hustlers.” The premiere kicked off on September 27,2017, and we were given our introductions to each of the characters, but it went fast. Here are the top five moments of the season so far.

During the immunity challenge, the Heroes lost the bid for this much desired position, but not by much. Hofbec and Katrina Radke didn’t come out of the gate being as strong as the other pairs of JP and Ashley and Alan and Ben. When push came to shove it was Chrissy and Katrina of the mom squad who were all talk with little action. When it came down to one of the other of them, it was Katrina who had been unanimously voted against. Her torch was extinguished before we had to chance to get to know here well. It was a sad parting, but somebody had to go.

The cast member who stood out above the rest was Alan. He seemed to be the one who set the pace for everyone else. He takes the bull by the horse and on the second night, he started a ruckus with Ashley and JP. JP even suggested an idol strip search. Alan felt certain that JP had an idol and even though JP attempted to convince him otherwise, Alan wasn’t having any of it. It was obvious that he didn’t really think that the pair had an idol, but rather, he was attempting to make them figures of distrust in the eyes of the others.

The paranoia has already begun and it appears that the lone wolf is the one who is going to begin fostering suspicion and distrust among the group. He’s gung-ho in his mission and he’s already putting his strategy into play by trying to take out the ones that he belives to be the most powerful so far. The bigger question remains as to whether this is going to help him or hurt him in the long run. He made a risky move so early in the show. He even carried the bickering into Tribal and JP and Ashley took the bait and vented when it may have been better to play things a little closer.

“Who can we trust more?”

Here is another pivotal moment that shows how Patrick is starting to get on everybody’s nerves. Simone is extremely nervous because she has the feeling that she is the one who is the closest to being voted out. She’s having some trust issues as she realizes that there isn’t really anybody who can be trusted completely, but it leaves the next logical question of who can be trusted more?

There is one advantage this season and that is the super idol. It can be played after the votes have already been read with the power to cancel the votes. This gives the player who finds is an advantage over the others. It was the Hustler Ryan Ulrich who was the lucky guy to find it and after his tribe won Immunity, he was obligated to pass it on to a Hero. Chrissy was his chosen and this was a good thing after losing the immunity challenge. This spared her for being the first player out in the first episode of the season.

Upon finding the Super Idol in her bag, she shrewdly waited to find out what would happen at Tribal so she would know if she needed to play it. She could have spared her partner Katrina, but instead, she allowed the torch to be snuffed and just let the Idol expire. She’s playing a smart game and isn’t being easily swayed by emotions or second guessing. She could see the handwriting on the wall and let nature take its course. Chrissy now has the opportunity to rise above her previous reputation, and although she isn’t safe, she’s on her own as a wildcard.

Simone had predicted her precarious position earlier in the episode and her hunch was correct. With just one vote for Patrick, the remainder of the votes were to eliminate Simone. Her torch was snuffed and she became the second contestant to leave the island.