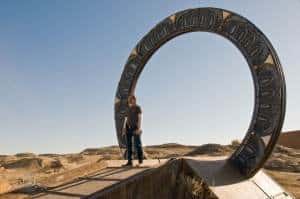 You read right, dear readers. This week’s Stargate Universe recap is actually a review, because there is a lot to discuss after this mind blowing episode. While tonight’s airing was actually my second time seeing it, it still held a dramatic punch and contrasted how far this makeshift crew of the Destiny has come along.

Tonight we saw the loss of Ginn (Julie McNiven) as well as the loss of Dr. Amanda Perry (Kathleen Munroe) at the hands of Simeon (Robert Knepper). This tragic double death sent both Dr. Rush and Eli into a state of vengeance, which governed their actions (or in Eli’s case wannabe actions) aboard and off the Destiny. In my personal opinion, Rush had the most logical reason for a breakdown than Eli did, because there was a history between Rush and Dr. Perry that extended pre-Desitny days. Eli had only known Ginn for a couple of days, maybe a week or two, depending on the time lapse on the show. If Ginn had have been Chloe, then I would understand the extent of Eli’s anger. With that being said, I’m not suggesting Eli shouldn’t have been upset at all, but the extent of his vengeance over someone he barely knew was a bit much to me. Gladly, Young talked some sense into him, but that talk still didn’t stop Eli from acting like a kid.

As for Rush, Amanda’s death was senseless, because she was an innocent bystander in the whole debacle with the Lucian Alliance. Plus, Dr. Rush beat himself up because of his inability to trust those around him indirectly was the cause of Amanda’s death, which could’ve been avoided if he had have come clean with the rest of the crew about the bridge. Does that mean he has himself to fault for her death? Not really, because Rush might lay some blame on Col. Young and Camile Wray for even letting the Lucian Alliance remain on the ship. This last statement leads me to my next assessment…

Rush killing Simeon was significant as more than just a vengeance kill in my eyes, because it raised new scenarios on how the 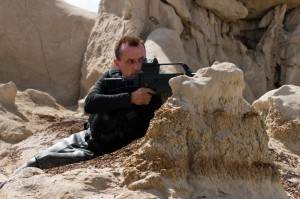 aftermath can play out. First, if it ever got out that Rush knowingly killed Simeon, who was willing to give up information about the attack on Earth, then the newly formed truce between he and Col. Young is basically nullified. That was some epically important information and by Rush acting with instinctive vengeance and not rationally will make him even more distrustful in the eyes of his “companions.” However, the chance of that coming out is slim to none, unless Rush stupidly admits it to someone on the ship. I also feel that Rush killing Simeon kind of works in his favor for Destiny’s overall mission. If the crew is still worried about saving Earth, then their mind is still on home, which can put a damper on the new mission at hand. Without a “home” to yearn for, the crew will have to focus on the destination in front of them. I know that’s a bit extreme, but that’s just me.

In short, the Power War goes to Rush this time, but the question now is if he’s fit to actually use it?

– I’m not feeling how the crew is treating Chloe. While I know she might be a risk, I hate that she’s been demoted to a lab rat to be yelled at out of fear or anger when she doesn’t comply with everyone’s comfort zones. Instead of fearing what she’s capable of, they might want to embrace her abilities and try to use them to their advantage, without acting as if she will literally stab them in the back.

– I personally didn’t see why Simeon would abandon ship. If he was that down for the cause, then why not kill himself and be done with it? I know he might’ve had a plan to hop gates back to the other Lucian Alliance members, but then what? I guess I wasn’t meant to understand the minds of intergalactic pirates.

– Lt. Scott is quickly becoming the sane, moral compass on the ship, which is a vast difference from last year. He’s growing into his own and is comfortable with his role as second in command on the ship. He’s smart, resourceful and knows how to hold his head in crazy situations, which has gotten a lot of people out of trouble recently. Move over, Eli. There is a new wonder boy in town.

So what did you guys think about the episode? Was there something you saw that I didn’t? Do you think the aftermath of this shake up will bring the crew together or not?