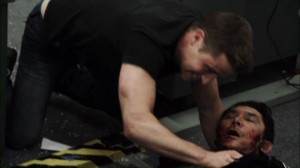 Giving reality shows a run for the money, SouthLAnd returned tonight with a season 4 premiere, “Wednesday” that is as raw and gritty as you will get on a show about cops. If you watched through the first three seasons, you’ve become accustomed to the realism with which the show is produced and the characters portrayed. They hold nothing back and the stories are better for it.

SouthLAnd’s return brings a reboot of sorts. Ben (Ben McKenzie) dropped the gauntlet on Cooper (Michael Cudlitz) and demanded he get help. Hard to hear from a boot, but it was taken in the right spirit and John Cooper returned a new man. Lydia (Regina King) was dealing with a partner who treated her like gum on the bottom of her shoe, which was only exacerbated when Lydia (unknowingly) started dating said partner’s much younger son. Seems the entire family has taken a sabbatical, and any chance to get Lydia out from under the thumb of an oppressive partner and back to the strong detective we knew in earlier seasons is welcome. 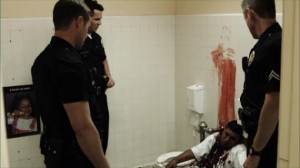 Ben, ever a boot and still in training, is now partnered with Sammy, preparing for life as a single father. Ben holds his job in the utmost respect, and while he still has a lot to learn, compromising his values isn’t in the cards. He is immediately at odds with a new officer, Ferguson (Lou Diamond Phillips), a tactless veteran of the streets who’s harried by his job, just wants to get it done and get home. Don’t expect him to be bursting out a tune from La Bamba any time soon.

The intro of Ferguson is finally a match for Dewey (C Thomas Howell), equally as ignorant and in bad taste as himself. I’ve always thought the casting of Howell as this disagreeable pain in the ass to be brilliant. It’s against what anyone would have expected of him from his youth, which makes him all the more compelling to watch.

Lucy Liu joins the cast as Cooper’s new partner, Jessica Tang. Young and good looking, there’s a running gag throughout the episode about a video of her on YouTube and the men razz her mercilessly. The ribbing prompts her to ask for John specifically as her partner because he’s not going to be interested in what she has to offer, so to speak. When I heard she had been cast, I was skeptical. Once she graced the screen, all doubts were wiped away. Liu owns the role and watching this new pairing on the Hollywood beat is promising.

Some of my favorite stories from “Wednesday” that set the bar for things to come:

If they would have played the entire season in one night, I would have watched every episode. A fantastic debut, new partnerships to explore and all with the backing of TNT – they really do know drama.