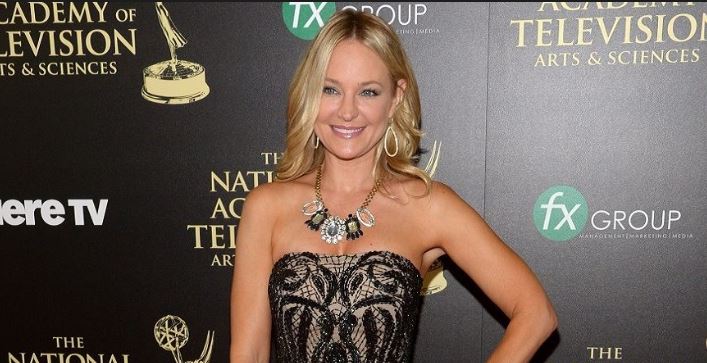 Young and the Restless fans have been watching as Sharon Newman has graced their screens since way back in 1994. We know it seems impossible that she’s even old enough to have had this role for this long, but Sharon Case (the actress behind Sharon Newman) has been working a lot longer than just 1994. She looks good, right? We know she’s about to find her happily ever after once again with her high school sweetheart as she and Nick Newman are about to get married — again — and that means we want to know more about the actresses behind the character.

She was born in 1971 in Detroit. Her birthday is on February 9, which is such a cold time of year to be in Michigan. It’s no wonder her family decided they had to leave when she was only a few years old. Perhaps it was because the winters were just unpleasant.

She began modeling at the age of 17. Her early career allowed her to experience a big move, too. She left for Japan to pursue her modeling career. She wasn’t there for long, though, which works for her because she likes it here.

During her childhood, she focused a lot on dance. She enjoyed ballet and jazz, but she also danced other classes as well. She spent most of her childhood in the dance studio, and we often wonder if she had any thoughts of becoming a dancer when she was an adult.

4. She Grew Up in California

Her parents didn’t stay in Michigan long after their daughter was born. When she was only three, they made the decision to move to California. They didn’t move her to LA to pursue acting at that age. They went, instead, to a town called Chatsworth, and she grew up there.

Back in 2001, she was well into her career as an actress, but she also made serious history. She was the first ever soap star to land a cover of FHM. It’s a magazine branded toward men and their lifestyle. She was the first, and it’s quite the honor to get to call that part of her history.

What’s interesting about her marriages is that one of them is unknown. All we know is that she was married for a very brief moment back in 1988, and no one knows to whom or for how long or what happened. Was is a Britney Spears Vegas situation? We just don’t know. We do know, however, she was married to a business man by the name of Sandy Corzine from 2007 to 2009.

She made the announcement in 2010. She calls it Pomp, and it’s a line of fashion jewelry. She was able to sell her items on QVC, and she was happy to design pieces you could wear any time, anywhere, and at any age. It did well.

8. Her First Television Role Was a Different Soap

Her goal was acting. However, it went there only after she opened some doors for herself by becoming a model first. She was given her first acting job in 1989. She was cast as Dawn Winthrop on the hit soap General Hospital. She practiced long and hard for the role, and it paid off for her.

10. Her Character Goes Through A Lot

Sharon has been married, divorced, raped, cheated on, she’s cheated, she’s lost children, she’s lost friends, she’s had mental health problems, she’s bipolar, and she’s got kleptomania. She’s been through it all. She’s been injured, close to death, hurt, happy, peaceful, mean, sweet, and kidnapped. And she’s done it all with grace and skill. Her range as an actress is one of the biggest reasons she’s been able to last so long in this role on television.