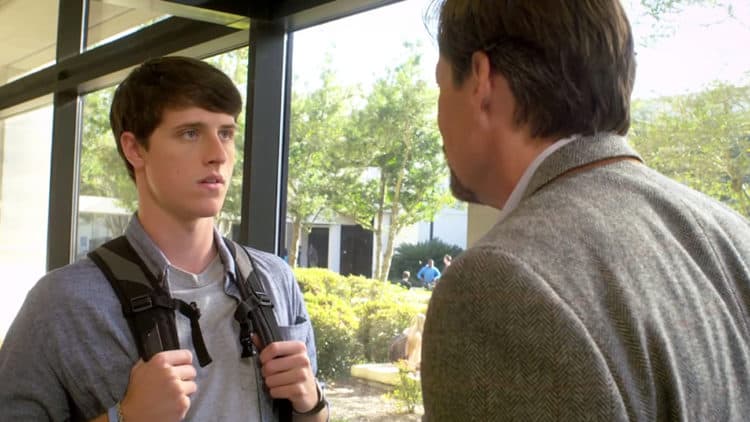 In 2014, the Christian film God’s Not Dead hit theaters and it did pretty well at the box office. With a production budget of $2 million, the film gained $64 million worldwide. The movie is about a Christian student has to prove that God’s not dead after he refuses to acknowledge the statement for his professor. Two more sequels were made following the predecessor: God’s Not Dead 2 and God’s Not Dead’s: A Light in Darkness. Another sequel, God’s Not Dead: We The People, is set to be released in October. Before moving forward, I want to be clear that this article is NOT an attack on Christianity or any other religion. I’m simply reacting to the message of this film and why it’s nothing more than propaganda.

Here’s the thing, God’s Not Dead is bad. The acting is poor, the directing is bland and uninspiring, and the premise requires a suspension of disbelief. In the real world, no professor can attack one’s culture or religion. Professor Radisson would’ve been suspended or fired had he tried to force his students to write God’s not dead for a grade. However, more importantly, its message is damaging. It clearly paints one side as good (Christians) and one side as evil (Atheists) and beats you over the head with its clear message. Let’s dig deeper into the mess known as God’s Not Dead.

The Movie Fails To Give A Strong Argument For Both Sides

People are complex. No matter what your religion, culture, sex, or race is, we aren’t just one thing. Someone can be a devout Christian who happens to be a murdering psychopath. The same thing can be said about an Atheist. Just because someone doesn’t believe in a certain religion, it doesn’t make them a bad human being. Unfortunately, God’s Not Dead spreads the message that you’re automatically a bad person if you’re an Atheist. Hell, anyone who doesn’t believe in God is painted as an evil person. Professor Radisson’s anger towards the man upstairs is due to the death of his wife. This is actually a compelling subject, a man who loses his faith and will to live because of a life-changing incident can be a fantastic story if written properly. However, Professor Radisson is written like a cartoon character.

He’s an asshole for no apparent reason. The film never dives deeper into his psyche, only making him the bad guy for the film’s protagonist. Professor Radisson’s arguments are so illogical that it’s head-scratching that this guy has lasted as a professor for so long. God’s Not Dead takes one side and firmly stands on. Dean Cain‘s character Mark is treated the same way. In the scene with his mother, who’s a Christian battling dementia, the filmmakers draw a line in the sand.

He’s evil because he denounces his mother’s faith in religion. What’s worse? He completely dismisses his “girlfriend”, who announces that she has cancer. This is not how human beings act. There’s no complexity to his character. He’s the mustache-twirling villain whose only characteristic is to be a complete douchebag because he doesn’t believe in God. The film never hides its true colors and clearly wants you to see Atheism as the work of the devil. We’re never given a chance to understand the non-believers and see their worldview. I understand that this is a film targeted at Christians, but to put such a negative light on Atheism without providing a decent counter argument makes the film come across as a propaganda piece.

The Film Doesn’t Showcase Christianity In A Positive Light Either

Amy is given cancer because she doesn’t believe in Christianity. Professor Radisson is (hilariously) run over and killed because he’s an Atheist. Is the movie really telling its audience that any non-believers deserve to die or get terminally ill? More importantly, the message of the film is saying that God picks and chooses who lives and dies. I hate to sound like a douche, but Christians can also get cancer and die. Again, I’m not attacking Christianity.

If you’re a follower of the religion then you have nothing but my respect and understanding; however, there’s no denying the wrong message that this film is sending. God’s Not Dead showcases all the Christians in the film as “perfect” people; When in fact, ALL HUMANS ARE FLAWED. No matter your religion, everyone struggles. Josh Wheadon is such a bland character because he’s presented as perfect. To make Christianity appear above and beyond other religions is not the way to present a strong message. Had God’s Not Dead showcased the good and bad sides of Christianity and Atheism, then this film wouldn’t feel like a Sunday school special.