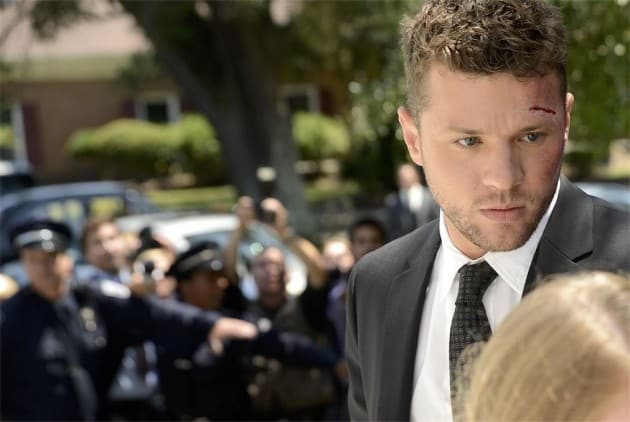 For a network murder mystery drama, Secrets and Lies – at least its first two episodes – is a surprisingly measured show about the most superfluous, familiar types of stories: affairs, child murder, and white male angst. Adapted from the Australian mini-series of the same name, Secrets and Lies isn’t as overtly melodramatic as one might suspect from the previews, which, despite being a massive benefit to the show, also robs it of a certain sense of creativity in the first two hours. From the show’s cinematic direction, to the character beats found within the first two episodes, it lacks any sort of personality or ingenuity, which leaves Secrets and Lies with a strong pair of lead performances, and not a whole lot else to support it – save for the central mystery, which to this point, is a bunch of well-disguised, predictable story threads, wrapped in the familiar, trope-heavy cloak of “murder uprooting the calm suburbia.”

What really keeps these two episodes afloat are the main performances. Ryan Phillippe and Juliette Lewis are two underutilized actors, and even though the two characters they play are purely stock characters, their performances elevate the otherwise typical premises set for both characters. Phillippe is impressive as the accused father Ben Crawford, whose professional and personal lives are crumbling when he finds the neighbor’s child dead in the woods from a head injury, and then becomes Andrea Cornell’s (Lewis) leading suspect in the case. Lewis is much less defined outside her character’s job in the first two episodes, but she conveys Cornell’s steamrolling attitude carefully, without falling into the melodramatic traps so many others shows embrace (*cough* Law and Order: SVU *cough*) with their unforgiving investigative approach.

Like the news outlets who immediately condemn Crawford and begin following him around, Cornell is more of a device to poke holes into Crawford’s life than an actual entity at this point. She has presence on screen, but like Ben’s wife and the other characters introduced, she’s only viewed through the prism of Ben’s experience with them, as the two episodes almost exclusively feature scenes with Ben. He dominates the frame of nearly every shot, the camera simultaneously trying to paint him as noble, flawed, and ambiguous, though the show’s attempts to maintain his status as a viable suspect grow strained by the end of the first episode. The second episode confirms this, through disappointing turns of character delivered through exposition, though it does give reason to why the show is focused on someone who will ultimately be innocent: the big (and thankfully, only) twist of the first two episodes is that Ben is the father of the dead boy, Tom, the result of an affair (which may or may not have lasted one night) Ben had with the woman who lived across the street.

The extreme focus on Ben is a yin/yang situation for Secrets and Lies; it does a great job early on pushing Ben out of his comfort zone into a place where he has to defend a number of seemingly innocent, increasingly suspicious decisions he’s made in the past. However, all that focus on his past behavior robs the show the chance to inform him (or anyone else) in the present; all we do is watch Ben in reactionary mode, and it makes the other, deeper conflicts of the show, the ones designed to bring the central murder mystery to light over time, not as developed or interesting (his wife is mainly just a character for Ben to feel guilty around, hardly a fully fleshed-out counterpart in his marriage). There’s potential, particularly with the youngest daughter Abby, who doesn’t have to fill the annoying “angsty teenager” role older daughter Natalie does, but this is only developed in a few scenes in the second episode, mostly an afterthought amongst the plight of Ben Crawford’s life.

As sanitized and flat as Secrets and Lies can feel, there is promise in the show’s delivery of its story. It doesn’t go out of its way to emphasize unnecessary details and doesn’t layer on twists and red herrings in an attempt to confuse or distract the audience from obvious truths. Once Secrets and Lies moves beyond painting Ben Crawford as a possible murderer (just a philanderer, folks; nothing to see here) and widens its lens, it shows moments where it can be an interesting examination of the thin social construct of a suburban neighborhood, and what happens when it reflects the darkest, coldest tendencies of human nature – especially in the modern world, which screams for explicit definition at every turn, even when such a black-and-white explanation doesn’t exist for a terrible, inhumane crime like the murder of a child. Unfortunately, it’s measured approach is a little too undramatic and unrefined, which leaves much of Secrets and Lies feeling well-produced, but hollow and whitewashed to the point it has no personality of its own. It’s like the cinematic equivalent of a brown cardboard box: well-constructed and sturdy to the eye, but thoroughly boring and surprisingly malleable under pressure, an abundantly common item that can be found in a million different shapes, sizes, and colors more interesting (and deep) than this one.