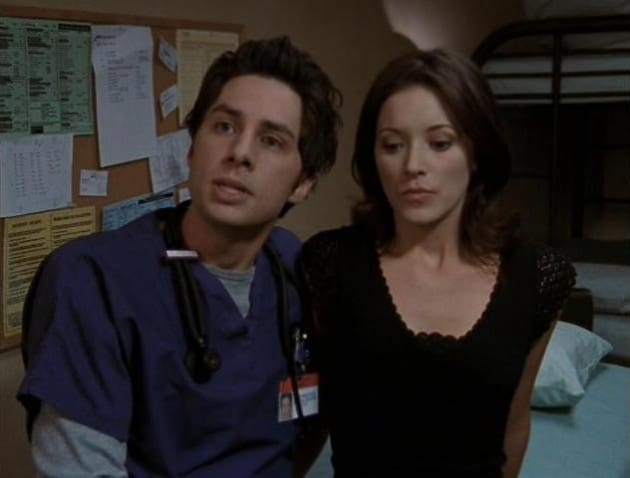 “My Drug Buddy” is an important episode in the time line of Scrubs‘ first season: it is the definitive episode where the season’s big plot lines are brought to light, and also the one that has to deal with J.D.’s first on-screen breakup, which place the episode’s priorities into direct conflict with each other. Integrating the end of a small arc within the context of a larger, more meaningful arc is a bit of a difficult trick to pull off, even on the most serialized of comedies like Scrubs; and “My Drug Buddy” almost pulls it off. Almost.

Where it runs into trouble is with Alex Hanson, J.D.’s love interest and Sacred Heart social worker; she’s less of a character than a plot device to delay J.D. and Elliot juuust a little bit longer, a character who goes from J.D.’s infatuation to disgraced drug addict in the course of 22 minutes, after spending the previous two episodes investing audiences in their infatuation. What characterization she was offered in her first two appearances is completely erased from this episode, which leaves her as a pair of suggestive eyes and pretty face, someone who exists more as a temporary wedge than a meaningful obstacle between the much-alluded to coupling of these two protagonists. Without Alex and J.D.’s relationship having established any kind of real stakes – beyond J.D. learning how to balance work and play – much of “My Drug Buddy” is spent laughing at J.D. for not sleeping with Alex yet, then dismissing her as a pill popper who immediately leaves J.D.’s life.

The arc falls flat without Alex’s character, but the relationship is revealed to be farce when J.D. and Elliot end up together at the end of the episode. Now, this is a well-deserved moment for both characters, but it completely undermines the last hour of scenes we’ve spent with the main character: not fifteen minutes ago, he was putting Alex on a pedestal over Elliot, going out of his way to disagree with her over their rehabbing patient (the one Alex was stealing Percocets from). Without engaging with J.D. on any kind of level besides his libido, it robs “Drug Buddy” of a meaningful emotional arc, the ending feeling more obligatory than surprising or revealing, especially in the aftermath of the Alex Hanson trainwreck.

Thankfully, much of this is contained to the third act; while it leaves the episode with a bit of a sour taste in the mouth, J.D. and Elliot finally getting together is an exciting step forward for the show, pairing neatly with the other big revelation of the season: Cox is in love with Carla, feelings that finally come to light after Turk chases him around the bathrooms of Sacred Heart in an attempt to make a ‘pee buddy’ with his girlfriend’s work pal. Like Elliot and J.D., the revelation of Cox’s emotions is a moment that comes a bit out of nowhere; but given how well the dynamics of Cox and Turk are established in previous scenes, the revelation surfaces more organically than the other stories of the episode (which are tied together with a C-story of Carla getting rides to work with Kelso, and trying to hide their budding friendship from her fellow nurses), and gives a bit of an added dynamic to his budding relationships with J.D. and Turk alike.

Despite the inconsistent execution of “My Drug Buddy,” it stands as an important turning point in Scrubs first season, and in the series as a whole, when considering J.D.’s various romantic arcs (which are mostly a hot mess) and Kelso’s relationship to others in the hospital. And that’s not even mentioning Cox’s friendship with Carla, which would come into play at various points throughout the series. It’s not a particularly hilarious or poignant half hour, but it nonetheless sets the stage for much of what was to follow, both good and bad. In a way, “My Drug Buddy” is one of the more accurate examples of what Scrubs was in its infancy, hinting towards the resonance it would find later, still struggling a bit to find its feet in the present.

– The Janitor makes a bet with J.D. that he won’t sleep with Alex, which sets off an uncomfortably tacky set of jokes where he makes fun of J.D. for not sleeping with her yet.

– Do not follow The Booty Principle, J.D. Didn’t you ever learn this in high school?

– The scene with Turk and Cox in the pediatrics bathroom is hilarious, from Cox’s wide stance at the urinal to him leaning down to wash his hands in the tiny sink.

– “It says: if you can read this, you’re standing too close.”

– For what it’s worth, I think Elliot’s bangs do frame her face.