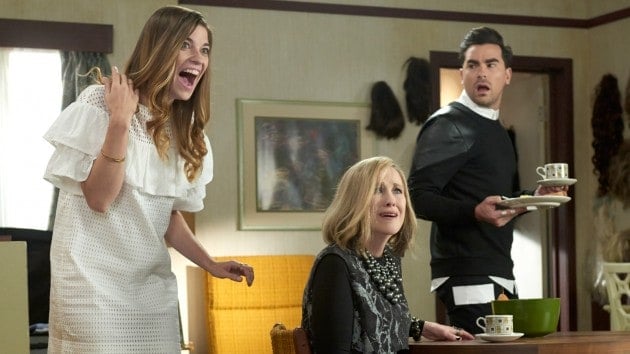 At various points throughout its first season, Schitt’s Creek has hinted at unexpected depth with its characters; or to be more specific, has suggested that each of the Rose family members are a little more damaged than they’d like to admit. Some of these stories have been alluded to more explicitly – Moira and Alexis, primarily – but the show’s also hinted towards more subtle developments, like Mutt’s broken relationship with his father, or David’s relationship with the world, which began to come to light in the season’s second half. As Schitt’s Creek drew the enigmatic Stevie and scene-stealing David closer together, the series’ examination of its central family unit shifted slightly to focus on its most magnetic performer, and in “Town for Sale,” the show uses those carefully laid bread crumbs to deliver a heartbreaker of a finale.

Throughout the first season, David’s loneliness and unhappiness has been well alluded to: back in “Bad Parents,” David seemed ashamed to talk about his career as a “gallerist,” reluctantly telling the story of a recent performance artist who breastfed audience members in a commentary on income inequality. That general dissatisfaction spread everywhere, from his sister to his current living situation – basically everywhere but his clothes, which David desperately clung to as the items in the world that defined him. “These clothes are the only thing I have left,” he tells Stevie; and the second half of the season reveals, once he and Stevie sleep together, just how true that is. David’s “friends” in New York were as superficial as he was, defining themselves by the clothes they owned and the people they associated themselves with; they weren’t family, or even people that understood or accepted him (one episode of the season’s second half briefly explored David’s sexuality, revealing him to be pansexual in pleasantly casual manner).

The most important moment, though, comes when David and Stevie decide to sit and talk about their current situation. He notes that she’s his only friend in town, and because of that, he doesn’t think they should sleep together anymore. Even though he knows Stevie likes him, he’s not willing to risk losing a friend to possibly fall in love; that alone speaks to how lonely David’s life in New York really was. And that loneliness frames “Town for Sale,” providing an emotional counterexample to the other ecstatic members of the Rose family in the first act, all of who find themselves clinging to Schitt’s Creek by the episode’s end, when the deal to sell the town falls through before Johnny and Moira can utilize a dying man’s pulse to get the signature they need to sell the town for $975,000 in the season’s most unsettling and hilarious scene.

Yet while Johnny is trying to sell the town for pennies on the dollar, and Alexis is “accidentally” cheating on her fiancee with Mutt, “Town for Sale” keeps an intense focus on David as he tries to find someone to go to New York with him. Alexis has no interest, Stevie has too many feelings for him, and his father won’t give him enough money to isolate himself from the world in Manhattan. And in the end, David takes his stuff in Roland’s truck, and runs away to the airport without saying goodbye to anyone.

That final image gives “Town for Sale,” and the first season of Schitt’s Creek, an unexpected shot of pathos: David’s been the breakout character of the season, both in terms of providing humor and being a character the show can explore in deeper, more engaging ways (like his mother Moira, David’s professional failures stand in contrast to his father’s video rental empire), and that final scene ends the season on a wrenching note. David is heartbroken, having the panic attack he thought he was experiencing back in “Wine and Roses.” Feeling left out in the world after an awkward attempt to bring Stevie with him to New York, David runs away alone, giving voice to his behavior through the first season in a new, empathetic light.

There are other stories in the finale – Alexis gets her moments, trying to let Ted down easy, and then convincing Mutt to express his feelings for her being the best of them – but David’s story brings real, unexpected levity to an otherwise light finale. Needless to say, it brings the season to a close with a surprisingly somber image, which is saying something following a scene in which a man dies, and two people try to manipulate his signature before the circulation stops flowing to his hands. After opening with a salvo of lighthearted Green Acres-esque comedy, the back half of Schitt’s Creek snuck in something a little dark and more damaged, giving voice to the subtle, underlying themes of family and community as a home for healing in its final few episodes, propelling it far above any initial expectations anyone could’ve had about the show. As a finale, “Town for Sale” does a wonderful job capturing that growth through the emotional investments forged with the younger generation of Rose characters, setting up the family for another round of hilarious, endearing stories about a family of broken people trying to find their way in a backwards town. I, for one, can’t wait to see more.