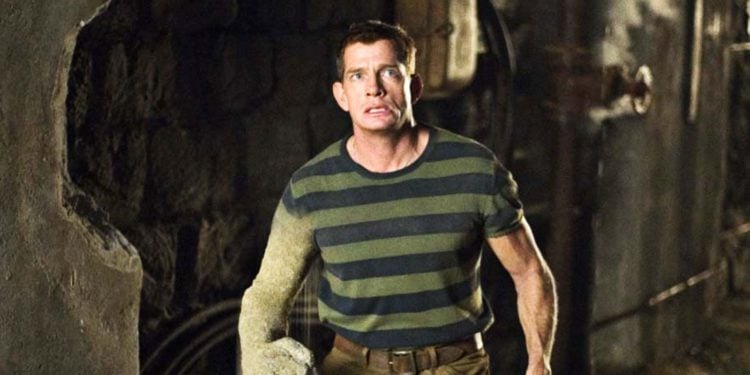 If you remember Thomas Haden Church playing Flint Marko, better known as the Sandman, from Spider-Man 3 in 2007, guess what? You’ll be seeing him again in the next Spider-Man movie. I know all of you have seen both of the Spider-Man: No Way Home trailers and each one just keeps giving us more and more clues. For instance, Doctor Otto Octavius recognizes Spider-Man, but acknowledged that Tom Holland’s Peter Parker isn’t his Peter Parker. How very interesting. I don’t know about the rest of you, but that’s all I needed to hear. The second trailer was even better, because we got to see multiple villains gunning for Spider-Man’s head. Two of them, which would be Electro and the Lizard, are from Andrew Garfield’s Spider-Man’s universe. We also saw two more, Doctor Octopus not included, who are from Tobey Maguire’s Spider-Man’s universe. That would be Green Goblin on his glider and in two different suits, which raises many questions. That’s a whole other topic, but another big elephant in the room as that giant sand cloud with the face. We are looking at the formation of the Sinister Six, and one of the those original members is Flint Marko, AKA the Sandman.

Okay, so this Sinister Six in No Way Home is apparently short one member. So far, we got Doctor Octopus (who might actually help Spider-Man), the Lizard, Electro, Sandman, and the Green Goblin. Will there even be a final member to complete the bad guy team? We’ll just have to wait to find out and I’m beyond pumped that it’s only three weeks away. But wait, there were some rumors floating around the internet on who the final bad guy might be. The Spider-Man villain people were talking about was the Rhino. Whoa, now we’re getting very ambitious. Would they really bring back Paul Giamatti’s Rhino from The Amazing Spider-Man 2? Maybe not, but then again, I never would have thought Jamie Foxx would return as Electro. Hey, the Marvel Cinematic Universe just keeps on surprising us. I say bring it on. Well, it seems like the Rhino may not appear in No Way Home after all. If you’ve seen Venom: Let There Be Carnage, I think we all know who the other bad guy will appear. But wait, will Venom actually try to eat Peter Parker’s head? Probably, but that’s an interaction I’m just dying to witness. Everyone is talking about what will happen in No Way Home, but I’m very curious to see what happens after Now Way Home.

We know that Sony intends on building their own “Spider-Verse” with their own characters. It started with Venom and they want to keep it going with Morbius and Kraven the Hunter. Can they possibly do anyone else? We’ve heard some rumors about Madame Web and Black Cat getting their own movies, but guess what? Sony is thinking bigger. For instance, would you ever expect them to give Sandman and the Rhino their own solo movies? Oh, not at all. Well, apparently Sony is planning on it. It’s not confirmed, but these rumors do spark a lot of interest. The source of these rumors come from DanielRPK, who is often reliable, but again, nothing is confirmed. So let’s just say there is some fire to this smoke. A movie just for Sandman and the Rhino sounds like a strange idea, but did anyone else think the same thing about a Venom movie? Okay, it’s not really the same thing, considering how popular Venom is. These two villains aren’t on his level, but they are still very cool characters.

The last time they were in Spider-Man movies, they weren’t exactly done much justice. That’s okay, because a second shot at both of them can do them good. But I wouldn’t pitch a solo Sandman movie or a solo Rhino movie. I think a better idea would be putting them both in the same movie as a buddy cop-style action movie. Yeah, I know these guys are the farthest thing from cops, but think of it as a the polar opposite of that. Just think of it as two small-time criminals trying to score the big score. When I think about it, I go back to how these two villains were partners in crime in the Spectacular Spider-Man cartoon. For the record, very underrated cartoon, but before these two even became Sandman and the Rhino, they were Flint Marko and Alex O’Hirn, two common criminals. These guys would often run into Spider-Man during a job and it wouldn’t take them long to get caught. When Norman Osborn tricked them into becoming guinea pigs for a his illegal scientific experiments, he transformed them both into the famous supervillains, Sandman and the Rhino.

Now the Spectacular Spider-Man cartoon used the Alex O’Hirn version of Rhino, understandably so. I mean, why else would they get the legendary Clancy Brown to voice him? But if a Sandman and the Rhino movie is going to work, I think they should go with the standard Russian version of the character. You know, like the Paul Giamatti version, except don’t go so over-the-top with the Russian accent. Just picture Flint Marko becoming partners with Russian criminal Aleksei Sytsevich and pulling off jobs together. Would they work well together or would they constantly bicker back and forth? Just like any other buddy cop movie, they would do both. Only this time, we’re dealing with two criminals who will eventually become supervillains. I honestly just want to see their chemistry working together. With Flint Marko being the down-on-his-luck criminal with more of a conscience and Alexei Sytsevich being the impulsive and hot-headed loose cannon, I think it makes for a fun pair. Just imagine a New Yorker going at it with an angry Russian. That’s comic book dark comedy material right there.

And no, Spider-Man doesn’t need to appear. I honestly don’t know who they would fight, but like Venom, they would probably fight bad guys who are just worse than them. It’s just the idea of them working together that really excites me. Sony, you guys want to make your own Spider-Verse, then give us something special. Venom was quite the surprise, so by all means, keep it coming.

Season One Recap of Raised by Wolves