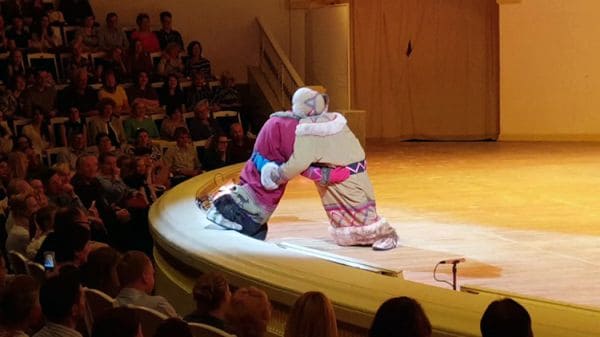 This is definitely an odd costume being worn by this Russian ballet dancer. But the act he puts on to show the ‘fight’ between two kids is pretty well done. In fact it makes the audience laugh numerous times and becomes quite confusing as you try to figure out just which end is which. After all you can see both ‘kids’ bending in the right places and moving of their own accord. There’re no fake feet, as in those that don’t move at all unless they’re being drug or flopped around for effect. Each shoe move on its own and doesn’t flop around as though boneless and stuffed with nothing more than wadding or socks.

The dancer easily cavorts across the stage, but I have to wonder if this act is so well rehearsed that he knows where the edge of the stage is or if he’s actually guessing by feel. It looks that way once he gets to the edge, but I would rather believe the former explanation and think that he has this stage mapped out so that he knows where his routine is going to take him. That really seems like it would be a better idea than to go wandering blindly around since unless there are holes cut into one of the kids’ coats that can’t be seen by the audience then he’s kind of wandering around blind.

Honestly though, having attended a few different shows in my time the answer to this is kind of obvious at times even if it’s not the case. Stage actors tend to know their marks quite well and follow them as much as they can in order to avoid tripping themselves up or doing the same to others. Solo acts are a lot easier, or so it would seem, to measure and memorize one’s steps so that it’s known just where the act will take you and when it’s time to turn or play up to the crowd so that they think you might be about to take a tumble. That kind of acting is great because you get the crowd into the scene and make them wonder what might happen in the next moment.

I have a lot of respect for stage actors because in all honesty they have to nail their marks pretty close if not spot on so that things don’t go wrong. There will always be a chance for an accident here and there, a hand or a foot could slip or there could be an issue with the stage. But it won’t often be because of an error on the part of the actor. Those that perform on the stage are typically well-versed in what to do and how to present themselves so as to give the best show possible and avoid any untimely and/or unwanted slips.