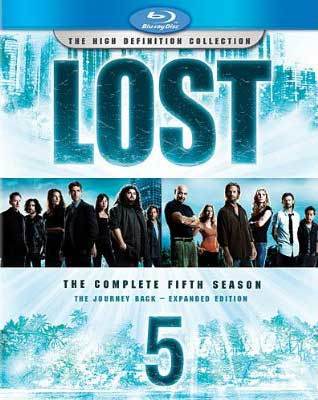 Getting a review copy of LOST The Complete Fifth Season ‘The Journey Back – Expanded Edition’ before the street date really didn’t give me much of an advantage as a reviewer. By this time, I would hope that anybody with enough interest to read a ‘Blu Ray’ review is aware of the technical beauty of the Blu Ray format. Simply put, it exceeds the broadcast quality (ABC broadcasts the show at 720p, and yes I know you have 1080i/1080p cable or satellite but guess what: it’s up sampled) significantly.

To say you have not seen LOST until you have seen it in true 1080p high def might be a bit of a stretch, but you have certainly not seen it at its best. The natural locations of LOST matched with the high art of shot composition and blocking executed by the crew is very worthy of mega-high definition. Add in Michael Giacchino’s orchestral score and some of the best Foley work (sound effects) in the business and LOST on Blu Ray could easily be used as the reference disc for calibrating your home theater.

So yes, Blu Ray is still the best way to watch a show so far (until Imax TV arrives, of course) and, in case you are wondering, LOST is still one of the best shows to re-watch. The story just never loses its appeal, and the high adventure aspects of the show become slightly embossed in the crystal clear Blu Ray environment.

Packaging wise, LOST The Complete Fifth Season adheres the industry standard including a coated card-stock slip case over a rugged clamshell container for the discs themselves. The artwork is meant to evoke the fade to white as well as the time flashes that dominated and frustrated fans. It’s beautiful to look at and impossible to photograph, so don’t trust any of the pics you see on the web. Next to the other sets for LOST, it sticks out like a radiant, beautiful, sore-thumb.

When I got the set early, I thought it would be a great opportunity to review the set in advance – but I was wrong. Aside from the technical advantages, there is little that separates the Blu Ray set from the DVD… until today, but we’ll come back to that later. Some of the more minor advantages over the DVD set: high def extras. Most Blu Ray sets, until this season, have included the standard def (480p/i) encoded extras produced for the DVD set. This has annoyed more than a few fans, myself included. The main allure of Blu Ray for a fanboy is getting the best possible print, and up sampled 480p/i doesn’t cut it. The reason the nets do this is clear, high def cuts of the deleted scenes and so on would have to be remastered to 1080p. In other words, they would be expensive. I’m happy to report that LOST The Complete Fifth Season on Blu Ray does include several HD mastered extras.

The main reason I couldn’t review the set in advance is that the Blu Ray’s premiere LOST-Geek oriented extra, the LOST University, did not open its doors until today. LOST University is exactly what the name implies, but maybe a little more. The feature allows LOST fans to participate in asynchronous classes covering a range of topics associated with the show. LOST University is not merely a glorified trivia session of the show itself, yet, in the ‘heady’ tradition of LOST, this program includes classes hosted by authentic academic egg-heads – as well as the entire LOST cast – on literature, physics, hieroglyphics and language, and philosophy. There are exams, GPAs (gulp), and even a very active social circle via the web boards at the LOST University website. 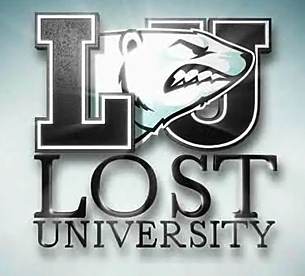 The LOST University feature is truly the differentiating content here. While some continue to call Blu Ray a fad that is destined to end up in the same junkyard as Beta tape – a superior format to VHS that died anyways – content such as LOST University makes Blu Ray’s advantages crystal clear. Utilizing internet connectivity, BD Live applications live on Blu Ray discs and are powered by the platform independent Java language. LOST University is a sobering example of what DVD’s cannot do as television viewing becomes more and more centered in the internet arena.

What one may rightly question is whether or not this feature is going to appeal to less die-hard fans of the show -I’m talking about the fans who tune in solely for the substantial entertainment value of LOST, and not the deeper intellectual fodder . The answer is a big ‘probably not.’ You don’t need to participate in LOST University to understand or appreciate the show, but for those of you who cannot get enough LOST university the feature will be the best thing since Dharma Fish Biscuits.

LOST The Complete Fifth Season on Blu Ray presents the highest quality transfers of one of televisions best shows. There is no question that fans will want to purchase this version over the DVD. Many of the special features are High Definition as well, and the menus load super zippy. And, yes, there are plenty of Easter eggs. The crowning achievement is most definitely the LOST University feature, which is guaranteed to give LOST fans hours and hours of informative and compelling LOST-seasoned fun.

For a preview of the LOST University content, check out our clips here.

For a review of LOST The Complete Fifth Season on standard DVD, click here.