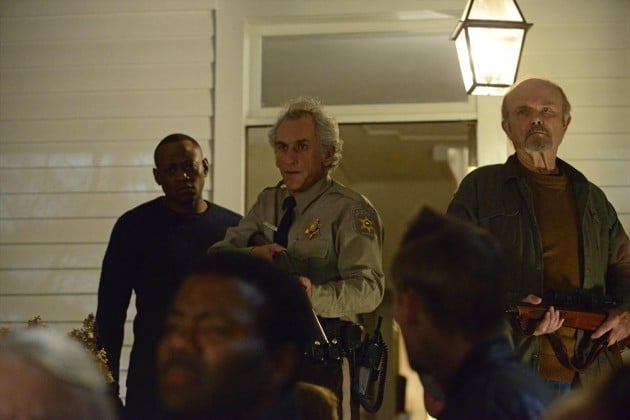 Resurrection ended its second season last night with an impressive finale.  No, we didn’t get answers to every little thing but just enough happened to make it serve as a satisfying series finale if a third season doesn’t get ordered.

According to Preacher James, Rachael and Tom’s unborn baby is the Anti-Christ, and he will do anything to prevent it from being born into this world.  They don’t go full Rosemary’s Baby on us, but he certainly gets violent by charging into the Langston house with the help of an angry mob.  They only had to resort to this after Margaret was unsuccessful in talking Rachael into disappearing herself by bribing her with the chance to be reunited with Tom again.  By the way, it was nice to hear Tom being mentioned more.  For a while now it seemed as if he was forgotten.  If Preacher James is to be believed (more on that in a moment) then the reason Tom never returned is because he’s at peace.  Then again, wouldn’t Tom have truly done anything in his power to come back to help protect Rachael and their son?

Now, we have to discuss James’ credibility.  Are we supposed to believe he’s truly in tune with God or whatever?  He sure sounded convincing when he even knew the baby’s name because Tom had told him when he saw him on the other side.  Bellamy is rightfully defending the baby, choosing to believe that no one is born evil.  It seems as though he might be right if the baby hasn’t done any harm over the course of one year, but even then, James is convinced that the end of the world is near.  Locusts began swarming outside the baby’s room one random night, and that’s possibly the biggest cliffhanger of the finale.

Maggie and Bellamy finally kissed after two seasons of the most obvious sexual tension.  They’re still together after a year, probably raising his little (big) sister Jenny.  Perhaps the most surprising reveal in the time jump was the fact that the United States government has an official Bureau of the Returned with Marty working in at least one of its offices.  Angela’s prediction of a mass return all over the world was correct, but she and the other secret officials are just gone without any further explanation.  Fred and Henry are talking about the rights of the Returned in the U.S. at least, which reminded me of True Blood in its later seasons when the vampires became officially recognized as citizens.  Now the Returned have had their voting rights rebuked, but they still have to pay taxes.

There’s still a lot of story potential if and when ABC does renew Resurrection.  Following up on this time jump, they could delve deeper into the religious aspects that Preacher James stirred up.  Is the baby truly the demon to be feared here, or is James the evil one?  I would also like to get a better understanding about why Jacob appeared to be the only one being hurt by Rachael’s presence in the house before the baby was born.  Jenny, Henry, or Bellamy showed no signs of distress.  And what is this connection between Bellamy and James really about?

What did you think of this finale and season as a whole?  Would you come back for a third season?