Home
Movies
Remember How Bad the Acting was in Clerks? 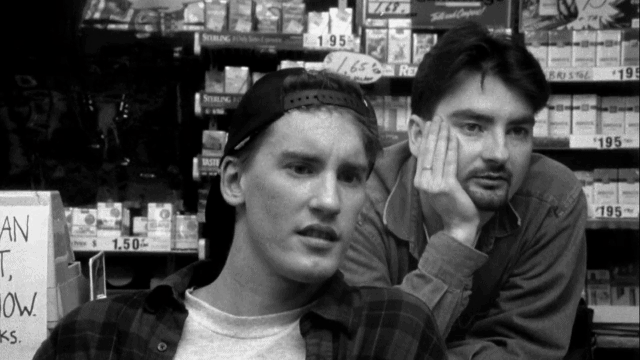 There’s been a ton of talk about how there will be a Mallrats 2 and a Clerks 3.  Kevin Smith has been teasing these ideas for years but talks seem to have heated up this month.   I have no clue what these movies would look like and if the same characters would be involved.  It’d be a little weird to see Ben Affleck in a Mallrats 2 but I’m sure he’d be hilarious.  With regards to Clerks 3, anyone over the age of 50 (which would be nearly everyone) in that would just be straight up weird.

But it got me thinking.  How awesome was Clerks?  Seriously.  What a great movie.  It was Kevin Smith’s real introduction into the spotlight and the movie that got his career going and on the path it’s taken him on up until today.  I’ll never forget seeing Clerks for the first time.  It was in my college auditorium so I got to see if for free during my freshman year in 1997.   Granted the movie was released in 1994 but I hadn’t seen it yet so it was all new to me.

I will always argue that seeing even the worst of films in the theater make them 100 times better.  There was so much laughter that night it was infectious.  P.S. I don’t think Clerks was bad at all but seeing it today?  Do you realize how bad the acting was?  Looking back I don’t think the acting was poor on purpose but it’s almost laughable how it looks like Dante is reading lines.  Everyone else?  It’s literally a joke how bad the acting is.

Look, Kevin Smith movies aren’t about the acting.  They never have been.  They’re about the writing and the subject matter.  The writing in Clerks was awesome and it almost made sense that guys in their 20s spitting out dialogue that was both more mature and ahead of their time would sound strange.  However, I gotta say when I watch clips or even the whole movie these days, it’s a lot harder to handle then when I first saw it.

What’s interesting is that people who see the movie for the first time today absolutely hate it.  It kind of makes sense but if they knew this was Smith’s first foray into Hollywood they might be a little more generous in their analysis.

P.S. this is no knock on you Kevin Smith.  I think you’re awesome buddy.   It’s just funny looking back on this film.  It’s as if the actors were reading their lines from a textbook.

Here’s a highlight clip, see for yourself.