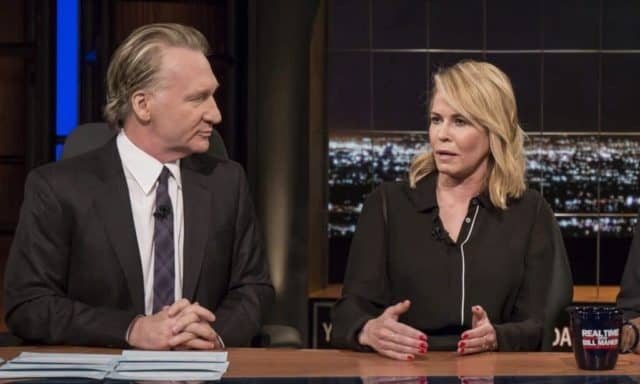 Expect a very controversial Real Time With Bill Maher tonight.   Mid show guest Chelsea Handler will be on display as will Ana Navarro.  Navarro is a frequent guest on Maher’s roundtable.  She’s a  Nicaraguan-born American Republican strategist and commentator who many think is GOP but she is not.  Navarro is vocal in her criticism of the current POTUS and often goes head-to-head with other Republicans on networks like CNN, ABC News, Telemundo, and chat show The View. She only rarely appears on conservative news site Fox, and her CNN argument about Trump with Real Time top-of-the-show interview guest Matt Schlapp went viral.

As for Chelsea Handler we’re pretty aware of her political stance.  Just in case you’re not, here’s something the Netflix host of Chelsea recently said in an interview:

Sean Spicer is my favorite person on the planet. Every press briefing, I mean, I miss my morning meeting now because the press briefing’s at the same time. I’m like, ‘You guys, I’m sorry – I gotta be with my spicy baked potato and watch him have diarrhoea as he mounts that dais. I mean, what a mess. He is a disaster! It’s like, what are you doing? This ship is sinking. You better jump off.

It’s not that we’re going to see these two women argue with one another.  In fact it should be the contrary.  They’ll likely agree but I’d put solid money on the show getting some interesting soundbytes.   The Real Time roundtable guests are rounded out with the rescheduled Cal. Rep. Ted Lieu (he canceled his scheduled appearance a few weeks ago), as well as former presidential candidate Evan McMullin.

McMullin’s been a controversial figure because he is a former employee of the CIA and seems to have intricate knowledge of Russia and Trump’s campaign.  Needless to say this is going to be interesting.