It’s been two weeks since the release of Sweet Valley Confidential (my review here) and the world of twins Jessica and Elizabeth Wakefield is still on the minds of nostalgic fans across the world. The UK is getting their taste of what all the fuss is about as the book was released today in stores across the pond. With news of Diablo Cody just finishing the script to the movie version of Sweet Valley High (the series that started it all), there looks to be no end in sight for Sweet Valley mania any time soon. Hopefully with all the noise being raised recently, we can finally see a release of the second season of the TV adaptation sometime soon (only the first season has been released).

Luckily, I’ve had the opportunity to talk to Francine Pascal, the creator of the sunny California town of Sweet Valley, about the success of Sweet Valley Confidential (it’s #14 on the New York Times Bestsellers List), Gossip Girl as a successor to the series, and the impact Sweet Valley has had on not only the lives of teens everywhere, but pop culture as well.

TVO: What inspired you to revisit the town of Sweet Valley, California after all these years?

Pascal: I kept running into people in their twenties and thirties who, when they hear my name, can’t wait to tell me what fans they were of Sweet Valley High. Listening to them talk about the series made me realize what an important part of their adolescence it was. And the more they talked about it, the more I realized that they own it in an entirely different way from my ownership. That’s when I began to think about taking all those characters into adulthood, just like them. I thought it would be great fun for those fans to see what happened to their favorite people. It’s just like Facebook when you contact your high school friends and find out what they’re doing now. Except, I hope, much more fun.

TVO: Did you always envision the twins at the point they are when Sweet Valley Confidential starts while writing the books back in the 80s and early 2000s?

Pascal: Not at all. I never thought about ageing them. In fact, this is the first YA or even kids’series to make the leap into adulthood.

TVO: How hard was it to connect the continuity of Sweet Valley High and University to Sweet Valley Confidential? And did Senior Year/Jr. High/ and Elizabeth “happen?

Pascal: I worked mostly from the flagship books, Sweet Valley High. That had the biggest impact and the biggest readership. 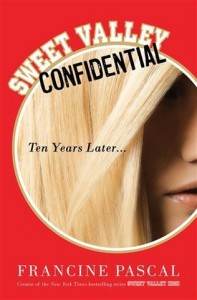 TVO: Are there any plans on a follow up to Sweet Valley Confidential? If so, will it focus on any of the other characters in the series? Or on the twins having kids of their own?

Pascal: I have been asked by the publishers to do another book. I thought maybe I would take it five years later, but I said I wanted to see how this one was received. And except for the Mean Girls, those venomous spoilers, who haven’t seemed to change since high school, it seems to have been received beyond my expectations. I’m delighted.

TVO: After Sweet Valley left the scene in 2002, books like Gossip Girl, The A-List, Twilight, and Pretty Little Liars took their place. What is your take on the new kids on the block?

Pascal: Tastes change. I remember thinking, well, there’s always another group of new teenagers, I’m set forever. But my agent, Amy Berkower, said no, the market moves on and they want something new. And she was right, but it turns out to be that there’s still a little room left for something as special as Sweet Valley.

TVO: Diablo Cody is in fact setting the movie adaptation of Sweet Valley High in the 1980s. Are you ecstatic about that?

Pascal: Absolutely. I wanted her to keep it in the eighties and she loved that idea. She’s a very talented writer, smart, funny with heart. And I trust her because she loved Sweet Valley.

TVO: Can you give us a taste of how the old Sweet Valley series and spin offs were planned and plotted? And if there were any hints we could go back and read for ourselves?

Pascal: I planned and plotted every single Sweet Valley High book and all the spin offs. It was not easy to find new stories, but I learned how to do that. After stealing every story from my teenage daughters and anyone else including every movies and book I ever read, I found out the best way to find new stories was in the daily newspapers. Even today, I can come up with at least four stories from the New York Times every day.

TVO: After all these years, Sweet Valley is still hot and is a pop culture staple that cannot be ignored. How does it feel to have made an impact on teens everywhere?

Pascal: I’ve come to appreciate and respect it more as the years pass. My greatest pleasure is knowing that so many girls learned to love reading through Sweet Valley. And today, they are readers and reading is power. It gives you independence and a mind of your own.