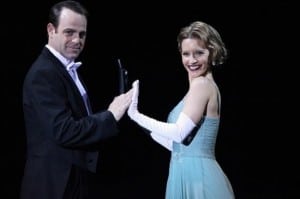 Tonight’s Private Practice was a departure into yet another creative form of storytelling.  Last we focused on Charlotte and Cooper, it was from Cooper’s perspective, complete with asides of the doctor speaking directly to the audience, this episode, however, “Georgia On My Mind,” took us right into Charlotte’s mind.

Private Practice spared no time in presenting a new style for the night — this time, a dance number at the top of each act.  When we first see Charlotte and Cooper, it’s during a tango that appears to be a dream of Charlotte’s.  The next morning, Cooper comes in after visiting the baby in the NICU and the two fall into a seemingly familiar discussion over naming the little girl, though Charlotte is adamant about not naming her daughter until she actually meets her.

Charlotte’s frustration comes out, as expected, when dealing with her visitors, further when Violet tries to suggest different ideas for distracting from the situation.  Here, we also get a first look at the complications to come with Mason, who has been staying with Violet, when he doesn’t feel like staying in Charlotte’s hospital room with her.

After a “28 weeks pregnant” card, Baby King-Freedman is seen again, in a good way.  The little girl is breathing on her own, and though Cooper is nervous, Addison and Sam confidently take her off of her ventilator, and allow the new father to hold her.  Meanwhile, Charlotte is stuck back in her room, essentially talking to herself while watching television, complaining that “this is what it’s like when your brain cells die.”  In an effort to maintain her control over the hospital, she declares Stephanie (remember her?) her private nurse, a conversation that is swiftly followed by an uncomfortable moment between the nurse and Sam when he and Addison arrive to check on Charlotte.  It’s a visit that doesn’t go so well, as Addison notices that Charlotte has been having contractions, therefore cannot lower her legs to lie flat — something she had been looking forward to more than anything.

Act two for the night is topped by a Bollywood number for Charlotte and Cooper, swiftly followed by the “31 week” indication — we’re getting closer and closer to a safe delivery mark for the babies.  Thankfully for Charlotte, no more contractions mean she can lie flat, though the moment is shattered when a suit from the hospital comes in asking if she will possibly pass on some of her chief of staff duties.  Charlotte, a woman who is no fool by any stretch, sees right through the polite suggestion and threatens the woman that her employers better not be trying to edge her out of the hospital, for juries love pregnant women and she will sue if the board should try this again.  It just goes to show, even though Charlotte may be lying down — she is certainly not out.

We also get a brief glimpse into Charlotte and Cooper’s attempts to keep some passion in their relationship during a middle-of-the-night borderline phone-sex conversation that unfortunately gets interrupted, as does Charlotte’s happiness when her contractions start again.  Yet, instead of mentioning it to Addison, her doctor, she tugs on the IV pole and changes the dosage for herself.   It seems as if she’s flying under the radar, medically, however, things get messy with Mason when Charlotte notices his torn shirt and a bite mark on his arm.

Once we’ve seen act three’s opening waltz number, Addison gets wind of Charlotte’s self-medicating.  Charlotte, while watching a college football game with James Peterson, argues that it’s her own fault — shouldn’t have left an addict with access to drugs, to which Addison volleys that a Magnesium drip is not a narcotic and locks the pump as punishment.

Cooper, who has been spending every spare moment in the NICU, had noticed that his daughter is developing signs of a certain infection, and bears the brunt of the hard news that she needs to go back on a ventilator.  He doesn’t want to tell his wife, after all, she is in her own special hell, but when things come to a head over Mason’s trouble — he had been bullying the kid who bit him — he blurts it out, and Charlotte promptly kicks him out of her room.  The fight between husband and wife, painful and full of low blows over who is taking more responsibility for the family, comes after an equally trying fight for Charlotte — with Stephanie.  The nurse is apparently the only one in the hospital willing to set foot in Charlotte’s room, and she holds nothing back when telling Charlotte so.

Perhaps it is this anger that leads into act four’s opening hip hop number?  It certainly has something to do with Charlotte’s upset over going soft, and the anger that flares at a group of Christmas carolers walking through the hospital.  Further frustrating for bed-ridden Charlotte, Amelia, Violet and Addison bring in a non-shower shower in an attempt to cheer her up.  Of course, it doesn’t work, and Charlotte is found counting to ten repeatedly and snatching a cupcake from Addison’s hand.

Mason as well, is upset by the family’s situation, and when Charlotte questions why he didn’t want to visit with her, he answers that he didn’t want to get yelled at.  To Mason, what he did wasn’t wrong, justified by juvenile logic that the kid he teased was weird and nobody liked him anyway.  But that’s nowhere near good enough for his step-mother.  Charlotte lectures Mason on the merits of being a man versus following the crowd and ups his punishment, to which she recives the ever popular “I hate you” in return.

But, as she says when Mason darts from the room, she hates herself, too.

And what of Baby King-Freedman, now?  Her health is not improving as Addison and Sam and, well…everyone would like, something that suggests a risky procedure to try to save her life.  As Cooper tells Charlotte, the procedure would mean she needs to be on bypass for a week, followed by the ventilator (again) and of course, she could still die before she ever gets to meet her mother.  It’s a touching scene, very revealing for Charlotte, as we see that she had actually imagined what this Christmas would be like — their first with Mason, in the midst of preparing for the triplets.

The penultimate act of the episode opens with a fierce Paso Doble, likely to indicate the emotions running high in the coming scenes.  After all, the very first scenes following the break parallel the operation for the baby with Charlotte talking to photos of the girl, determined to meet her, and her efforts to break her bed-rest and leave the room to go see her.  But one swift kick from one unborn baby reminds her — she has to be a mother to all three of them…somehow.  Thankfully the baby pulls through and is hanging on, as Jake tells her, but that doesn’t stop the wave of regret Charlotte exclaims.  After all, she was the one wishing to not be pregnant, calling the girls names for months — she believes everything is of her own fault.  In desperation, she cries out to whatever higher being there may be to be taken, for her daughters’ lives to be spared.

The sixth act starts off with an unusually peppy swing number, suggesting that maybe, hopefully, the episode will have a happy ending.

Mason comes in, tells Charlotte that he did apologize to the kid he bullied.  Charlotte recognizes that the precarious perch their family is on has to be scary for the kid,  especially considering that his mother died almost a year ago in the same hospital, but she promises her stepson that she won’t leave him, and as she tells Mason, she’s too mean to die anyway.  Charlotte has Mason grab a box of freshly sharpened pencils from a drawer, though they don’t draw or write — no, the two squish into her tiny hospital bed and fling the pencils up into the ceiling tiles.

And yes, finally at the 33 week mark, Baby King-Freedman is strong enough to be taken off of the ventilator!  Charlotte is almost giddy when Sam brings her the news, and while she is genuinely happy for her daughter, she has a hidden agenda.  She intentionally keeps Sam in the room longer, so that she can sneakily call Stephanie into the room.  It’s awkward at first, as expected, until Charlotte tells Sam to man up and not let Stephanie get away, which he follows through on.  It would appear that Stephanie actually impressed Charlotte during her care, and has been deemed worthy.

It also would seem that Cooper fully intends on living out Charlotte’s Christmas vision when he takes Mason to pick out a tree for them, however, Mason puts a hitch in his plan when he remarks that this tree isn’t going to go in their living room.  Yes, you guessed it, the pair take the tree to Charlotte’s hospital room complete with trimmings, and just as the three of them settle in to name Baby King-Freedman, Charlotte’s water breaks — this time, at the right time.

Everything seems to be running smoothly for once, when Charlotte stops them on their run to the delivery room, adamant that she must see her baby in the NICU first.  Upon seeing her for the first time, Charlotte decides on a name — Georgia.

The episode closes with a final solo tap number for Charlotte.

Yes, I will agree that the dance numbers did feel rather strange, though it is also my opinion that they are intended to preview the emotion of the scenes that followed them.  Perhaps that aspect of the episode is a poetic stretch, but the focus on Charlotte and the challenges for her were done very well.  Not only were the insights into her thoughts well written, managing to still maintain character while showing Charlotte’s fears, the added camera angles from Charlotte’s perspective helped as well.

Charlotte is perhaps the character on the show to experience the most growth and change over the past six seasons, and this episode showed just that, especially by having Charlotte verbalize it to herself.  The episode opened her up, showed her fears over losing her family, her desire to still be romantic with her husband, and even some of her capacity for playfulness as we saw through her interaction with James and meddling in Sam and Stephanie’s relationship.

I can’t imagine what is possibly left for Private Practice to bring in its final three episodes.

The final three episodes will air this January at 10/9c on ABC.