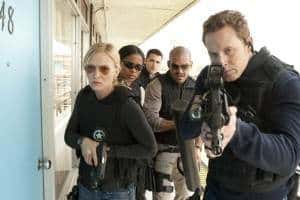 I can’t even begin to list all the TV series that Bruckheimer has been involved with since CSI. I can tell you that some were good (Cold Case, Without A Trace when it wasn’t digressing into who was sleeping with whom) and some weren’t (The Forgotten was quickly just that). His latest entry is Chase (September 20), which drops squarely into the oversaturated landscape of TV crime shows as the third show to feature U.S. Marshals (following In Plain Sight and Justified). These U.S. Marshals are tasked with fugitive recovery, going from their Houston home base to anywhere in the country in order to bring down the worst offenders, since doing a show about chasing down bail-jumpers or deadbeat parents would be beyond the scope of dramatic television.

The team is lead by Annie Frost (Kelli Giddish, formerly the lead in FOX’s oh so quickly yanked Past Life), whose most prominent characteristic is that she wears cowboy boots, ostensibly meant to symbolize that she is tough and not effeminate. An actor I’ve long enjoyed, Cole Hauser (who’s a long way from his starring role in FOX’s New Orleans cop drama K-Ville), joins her as the charming Jimmy Godfrey, who has trouble with the women in his life, because most handsome guys have bad romantic lives. The two vaguely unique characters are Marco Martinez (played by Prison Break‘s Amaury Nolasco), who cannot keep his mouth shut, which is oddly humorous at times, and the awkwardly named Daisy Ogbaa (The L Word‘s Rose Rollins), who is the group’s tactical specialist and has been seen carrying a shotgun. That’s not something you see every day. Then you get into the utterly weird: Desperate Housewives‘ Jesse Metcalfe playing the wide-eyed newbie. It’s strange casting, though I guess it makes sense since Metcalfe pulled a classic newbie move by saying at the NBC press tour that no one had ever done a TV series about U.S. Marshals before. For the most part, these characters have been done before. I can only hope that they develop beyond their molds in subsequent episodes.

The acting reflects the limited character development, as if the actors don’t even know who they are yet. It’s awkward and not particularly engaging. I’m not convinced that Giddish can lead the show; she gets overshadowed by Hauser at times and I could see the show working with their roles reversed. They have some good banter together, and I hope the show keeps that up, but I just don’t see Giddish having a leading quality. Maybe if and when the characters are embellished, she and the rest of the cast will show more of what they can do. Particularly Rose Rollins, who seems to be the odd one out in that she all too often is just there.

Plotwise, Chase wants to be a “cat-and-mouse” game between the Marshals and the bad guys, going so far as to switch us between the fugitive’s narrative and the feds’ attempts to find him. The pilot concerns a series of home invasion robbery-homicides, which is a fair enough crime to start the show with, and the perp has some relationship issues and a young daughter that get in the way. Unfortunately, Chase is saddled with the conceit that thanks to the glut of cop shows on TV, all of this sounds rote after awhile. There’s just no real suspense in the script. The twists thrown in – that Annie is able to get a lead by identifying a Waylon Jennings song, for example – come off as more cutesy than actually interesting. Only one actually got my attention, and it’s because a main character makes a painful screwup. A basic plot could be forgiven if there were interesting characters, but as there aren’t, the whole thing just falls flat.

Nor is it that unique: we already have two shows about U.S. Marshals, one with its own brassy blonde female lead (Mary McCormack as Mary Shannon in USA’s In Plain Sight), and a cop show that’s already set in Texas, albeit Dallas (FOX’s The Good Guys), plus there’s a real-life version of this (A&E’s Manhunters: Fugitive Task Force). None of these things are the fault of anyone involved in Chase, but if they were trying to put a unique spin on the cop show, they’ve wandered into territory that’s already been covered. At this point, I’m not sure there’s a kind of cop show that hasn’t been done, unless somebody decides to pick up Law & Order: Code Enforcement Division.

There are some good parts of the pilot: a scene involves Giddish and Hauser’s characters posing as newlyweds, which has been done but they have an engaging banter together; the relationship that the fugitive has with his daughter and the choices it leads him to make are both surprisingly interesting. As mentioned before, one character falls flat on his face at a critical moment, which is at least different. The show also tries for some big setpieces, first a foot chase in the middle of a cattle drive that’s been spoiled by previews already, and a later one on a bridge at a border crossing. They’re not the best I’ve ever seen but they do get points for effort.

After all, this is just the pilot, and with very few exceptions, pilots are often the worst episodes of a show as everyone involved is still trying to feel out what they’ve started. They’re also often saddled with exposition and introductions that take up valuable time. I can only think of three shows that ever defied that – Sports Night, Third Watch and 24, and none in recent memory. Even Human Target‘s pilot wasn’t one of its best episodes. I’ll be recapping this one all season, and I’m interested to see if it finds itself after a few more tries.

However, TV audiences aren’t likely to be very forgiving and stick around to see what develops. While there’s potential here, I don’t think the pilot for Chase has enough to draw viewers in for another week or two to see if the show acts on it. It’s just not very good. As far as Bruckheimer shows go, quality-wise this is more like The Forgotten, which is where it’s likely headed.

Chase premieres Monday, September 20 at 9:00 PM on NBC. Stay tuned to TVOverMind for continued coverage of the series! 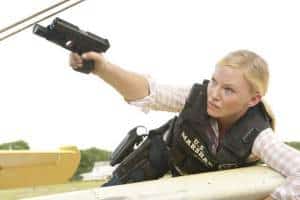 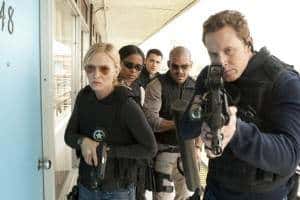 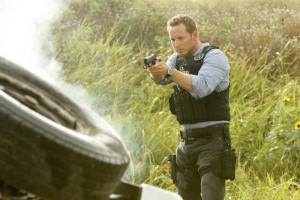