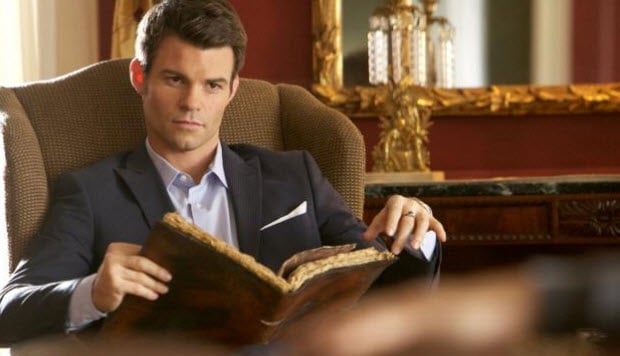 This was another fantastic episode of The Originals, as the series is moving forward at a good clip. After learning of the history between the witches and Marcel last week, we also finally got Elijah back.  He’s better than ever, taking charge of his family’s issues one at a time, much to his brother’s dismay.

Agnes, the last remaining elder of the coven, abducts Sophie and injects her with a substance that will eventually cause a miscarriage in Hayley by the end of the night.  Naturally, Elijah was one step ahead of the game.  He already had Davina working on the unlinking spell before this became an issue.  We also lucked out with that pool scene!  Elijah held Hayley(!!)  in the cold water to buy some time with regulating her body temperature while Davina works out the spell.  The spell is lifted just in time, and Elijah and Hayley share another moment.  To be honest, I would probably watch an entire hour of Elijah and Hayley’s silent exchanges because the way they look at each other speaks a thousand words.

Meanwhile, Father Kieran is holding a meeting with the “pillars of the community who contain the supernatural balance” including policemen and the mayor.  Klaus simply asks them for help with finding Agnes’ address.  Kieran stands up to Klaus in front of the group, but he still ends up helping him obtain Agnes because Klaus told him that she was responsible for his nephew’s murderous rampage.

Sophie pleads with Elijah to promise that he won’t let Klaus kill Agnes.  The way Elijah responded that he won’t let his brother kill her, I knew right then and there what was going to happen.  Elijah honored his promise to Sophie and saved Agnes from Klaus, only to kill her with his own hands like the boss he is.  Klaus was bitter in the beginning of the episode, wondering who put Elijah in charge of the family’s plans, but he surely looked proud of his brother in that moment.

Rebekah planned on leaving town, as she only initially came to make sure Elijah was okay.  Now that he’s free, she doesn’t feel like sticking around to watch her brothers and Marcel play their little games.  Her goodbye with Elijah was sweet.  She cried saying she just wants to be free, and Elijah gives her a kiss on the cheek and replies, “Then go. You are free.”  Obviously Rebekah wasn’t completely ready to run right away, because her next stop was to say farewell to Marcel in person.  They share a passionate night together, but she won’t even let this possible rekindled romance keep her in New Orleans.  I thought it was interesting that she asked Marcel to leave with her, because I would have bet my money on the fact that she was headed back to Mystic Falls to be with Matt.  We all know Matt could use her help right about now!

Marcel has been growing suspicious of Klaus when he discovered he’s been lying about where he lives.  He even temporarily freed his former best friend Tierrey from his imprisonment in the walls of his garden to ask him what exactly happened that night of the masquerade ball when Tierrey killed a fellow vampire.  Tierrey plants even more doubts about Klaus in Marcel’s mind when he tells him the truth, and convinces him that Klaus must have a few vampires on the inside under his compulsion.  We know this is true, but it’s good to see Marcel is finally catching on.  After his tryst with Rebekah, some lightbulb must have gone off in his head.  He went to the old plantation where he was abused as a child, which happens to be the Mikaelsons’ current dwelling.

Marcel takes it upon himself to knock and introduces himself to Hayley.  Cut to Elijah getting home to find an empty house, and it appears Hayley is missing.  Dun dun dun.  Of course this means Rebekah will be returning home, because we all saw her warming up to Hayley and accepting her as family despite her sometimes sarcastic comments.  Given the latest news that Tyler Lockwood will be the first Vampire Diaries character to crossover to The Originals, I can only hope that he fights with the Mikaelsons to find Hayley.

While all the supernatural beings were dealing with each other, Cami was privately struggling with her own demons.  She initially came back to New Orleans after her brother Sean killed himself and fellow seminary students.  We know that Klaus compelled her a couple weeks ago to forget her anger, and now that he saw the witch responsible for Sean’s actions die, he tells Cami that she needn’t worry.  Confusing to both Klaus and myself, Cami makes an odd threat that she will undo his compulsion effects on her, and when she does, he will regret it.  I’m curious what a psychology major/bartender/HUMAN could really do against an immortal vampire, but that’ll be interesting to see her try to get revenge.

What’d you think?  What role do you think Tyler will play in all this?