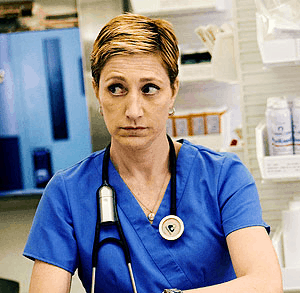 Though not as good as last week’s installment as far as laughs go, the penultimate episode of Nurse Jackie‘s first season was still one of the better things on television this week. However, like all shows featuring adultry, it’s all got to unravel eventually — and for Jackie, that’s quickly happening.

The episode opened with Jackie spending time with her family. Kevin and Fiona have  a “secret plan” for Jackie while she takes Grace to her tap class. Fiona almost spills the beans, but is shushed quickly by Kevin. For such a small performance, Daisy Tahan does a wonderful job as Jackie’s cute youngest daughter.

While at tap class, Jackie gets into an argument with a fellow mom because her daughter is running into Grace. Jackie tries to tell the girl to back off, despite Grace’s pleas, eventually getting into a verbal fight with the girls mother, “saying the f word” to her, and leaving with an embarrassed and angry Grace.

Meanwhile, Kevin and Fiona are looking at rings to replace the wedding band that Jackie had sawed off last week. Kevin opts to get her a diamond ring, which he and Fiona will use to surprise Jackie. I’m surprised that the jeweler didn’t tell Kevin that the ring had been sawed off, which he should have been able to tell if he was any kind of jeweler at all.

Meanwhile, Jackie arrives at the hospital for the orientation for the new Pill O-Matix (apparently the Pixus was scrapped in favor of this “better” machine). Eddie is present, and though Akalitus expresses regret for firing him, she makes him watch the orientation of his replacement.

Meanwhile, Coop begins asking Zoey what Jackie likes, to which Zoey humorously replies with a list of mundane things, including gum, and coffee. Coop inquires as to whether Jackie is seeing someone, and Zoey replies that she thinks so. Coop still thinks that Zoey’s “thinking so” is still plenty of reason for hope. However, his girlfriend arrives at the doorway in an elaborate fur coat, and “just happened to be in town.”

Coop painstakingly breaks up with her outside the hospital in favor of Jackie, refusing her offers of allowing him to see other people. She walks away, leaving him, as O’Hara and Jackie look on. He waves sheepishly, prompting peals of laughter from O’Hara as Jackie disgustedly goes back inside.

Coop brings Jackie  a vase of flowers and some gum, a sweet but annoyingly stubborn gesture which he refuses, leaving her the stuff before leaving. Before Jackie can do anything, however, a movie critic is brought in, having fallen and broken his arm while crossing the street while on his laptop.

Jackie doesn’t think that this man has the best taste, telling him that she actually liked Hotel for Dogs, which the critic called the worst film of the year. They argue back and forth, and the dislikable critic doesn’t earn any points with Jackie.

Jackie returns the vase and gum to Coop, despite his argument, and leaves. As she does, Eddie walks into the hallway, running into Akalitus, who tells him that she’s looking for another position to put him in, perhaps in a smaller pharmacy, like oncology.

Akalitus then goes to meet the critic, and the two surprisingly hit it off, despite them both being very contrary people. After finding out that he’s single, Akalitus shows interest, but walks away.

Meanwhile, Eddie shows Jackie a new glitch he has found in the Pill O-Matix — unplugging the computer will cause the system to reset, and Jackie will be able to get whatever she wants out of the cabinet. He assures her that everything will be fine, and that he’ll still see her outside the hospital. He wants to meet her kid, and he wants her to meet his mom. He’s a very nice guy, and it’s sad to see him get played like this by Jackie. The two then proceed to have sex on top of the Pill O-Matix.

Later, the critic is complaining of the pain, but Zoey accidentally overdoses him during a conversation with Jackie about the film The Guardian, causing him to go into a coma. Zoey is sent away to the bathroom, and is told that she’s being taken off the floor. She’ll be able to answer the phone, but that’s about it. Akalitus then walks in and orders Zoey to go to her office. She’s obviously angry about her potential love interest being thrown into a coma.

Meanwhile, Mo-Mo deals with a patient who has a spider in his ear. The experience is unpleasant for everyone involved, even after the spider is flushed out; the patient complains that he feels something crawling in his other ear too.

Later, Thor and M0-Mo take Zoey out for dinner, trying to reassure her that she’ll be okay, and that the experience with the movie critic will end up improving her nursing skills. Zoey suddenly has the epiphany that Thor is gay, but this seems to be the only revelation she has during their dinner.

Meanwhile, Jackie returns to the bar, bringing back some flowers from Coop’s gift (the only part of it she didn’t throw away) to her two daughters. Fiona is appreciative, but Grace is still resentful to Jackie for the incident at the dancing class. As Jackie hugs Kevin and looks over her daughters, Eddie is shown looking in from the window — the jig is up for Jackie! Eddie walks away into the dark snow, ending the episode.

It was a rather good one, and there’s plenty of foreshadowing to be found. The rather random discussion about O’Hara’s mother sets us up for an appearance from the reason for O’Hara’s woes, and of course the payoff of Eddie finding out about Jackie’s family will be something to watch, come next week in the season one finale of Nurse Jackie, which will be titled “Health Care and Cinema.”