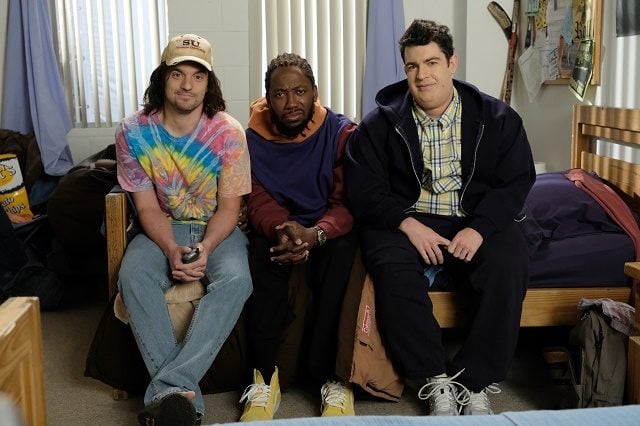 Whether or not this is the last season of New Girl, these final few episodes of Season 6 have certainly been bringing a sense of closure to the series’ six-year run, and tonight’s installment, “San Diego,” continues that trend in an even more significant way, as it ends Nick and Reagan’s dysfunctional relationship and finally reveals Schmidt’s first name. Both of these moments are important to Season 6 and the show as a whole, but while Nick and Reagan’s break-up goes down as expected, the unveiling of Schmidt’s first name is somehow able to be both surprising and hilarious, living up to the overwhelming hype that has surrounded this reveal since New Girl first began.

So what actually is Schmidt’s first name? It’s something that no fan of the series would have ever predicted: Winston. That’s right, Schmidt shares the same name as his good friend, Winnie the Bish, and the majority of “San Diego” is spent on the backstory of how Winston got to keep his name and what the two of them will do now that Schmidt wants to use his first name again. Instead of telling a deep, emotional story about why Schmidt has chosen to only go by his last name for the past decade and a half, New Girl opts to tell the funniest story possible, as Schmidt, Winston, and Nick reflect on the implementation of the “One Winston Rule” and how the two friends tried to differentiate themselves from each other while in college, using such monikers as “Black Winston” and “Jew Winston” and “Hot Winston” and “Ugly Winston.” We even get a fun, if all too brief, flashback to the three friends at their college homecoming, as Schmidt and Winston got into an actual physical altercation over which of them would be able to use their first name, a fistfight that breaks out again in the present after Nick proves to them how confusing things will be if they both go by “Winston.”

Underneath all the incredible laughs, though, there is a sweetness to the storyline surrounding Schmidt’s real name, as Winston stops by his and Cece’s house near the end of the episode to tell his best friend that it’s his turn to be the one, true Winston, leaving him to go by the title of “The Bish.” Even though the entire argument is pretty damn stupid (and the New Girl writers and actors know it is, which is why they play it up so much throughout the half hour), it’s still a wonderfully thoughtful action by Winston to hand over sole custody of their name to Schmidt, and it showcases the inherent kindness that has been a trademark of Winston’s character for years on the show, one of his two defining traits (the other being his wacky brand of weirdness).

But as soon as Winston gifts Schmidt the sole use of their first name, we know it won’t last for too long, and it doesn’t. Schmidt hangs on to his “Winston” title for less than a minute of screen time, as he immediately rejects the name after hearing Cece say “I love you so much, Winston” while they’re in bed together. Both he and Cece quickly return to the loft to tell Winston that he can remain the one and only “Winston” in their friend group, but Schmidt takes it one step too far when he calls Winston’s name “the worst name in the entire history of names,” which causes Winston to start up another hysterical physical fight between the two friends, ending this wildly goofy storyline on a comedic high note.

The rest of “San Diego” focuses on the Jess/Nick romance storyline, which has been driving most of the drama between the two of them (and Reagan) for the past couple of episodes. As I mentioned above, major changes finally occur in “San Diego,” as Nick and Reagan officially break up (but only after Nick does everything he can to avoid a confrontation with her, even leaving Reagan on a train to San Diego by herself), and Jess admits to her dad that she can’t just “move on” because she’s in love with Nick, even if it doesn’t make any type of logical sense. The Nick material in this episode is a little stronger than the stuff that Jess is given (although that’s no fault of Zooey Deschael or Rob Reiner, who are both terrific throughout the half hour), but it all culminates in that fantastic phone call between Nick and Bob, in which Nick finally proves to Jess’s father that he’s the right man for her by describing his daughter’s “giant heart” that’s “part compass and part flashlight” and calling her “the greatest person I have ever met.”

I really appreciate that New Girl doesn’t forget about Bob’s dislike of Nick in “San Diego”; he’s never been a fan of his since all the way back in New Girl Season 2, and to suddenly have him pushing Jess and Nick together without a valid reason would feel cheap and contrived. By giving us that conversation between the two men, though, the series does a terrific job of turning Bob into Nick’s biggest supporter, which is why he’s the one who tells Jess at the end of the episode that Nick and Reagan have broken up and that Nick’s still in love with Jess, whether he realizes it or not.

Furthermore, New Girl also provides the best possible spotlight for Nick’s true feelings. There have been moments throughout New Girl Season 6 that have shined a light on just how much Nick loves Jess, tracing back to the season premiere in which he reveals that he dedicated his novel to her, but in this one phone call, Nick finally says what fans have been waiting for him to say and articulates his feelings for Jess in such a perfectly Nick Miller way that the scene manages to be both extremely funny and absolutely beautiful at the same time.

New Girl‘s future remains uncertain, and if I had to guess if we’re going to get a Season 7 or not, I’d probably lean towards no. However, with the events of “Misery” and now “San Diego,” the New Girl writers have clearly set up an entertaining and emotional endgame for the series that should satisfy longtime fans if next week ends up being the series finale instead of just a season finale. With the reveal of Schmidt’s first name and Jess preparing to proclaim her feelings to Nick, this certainly feels like the end, even if I don’t want it to be, but if New Girl can deliver a finale next week as weird and wonderful as “San Diego,” I’ll leave this show as a satisfied, although somewhat saddened, fan. And that’s really all you can for from a series you love, right?

What did everyone else think about this week’s episode of New Girl, and what are your thoughts on the reveal of Schmidt’s first name? Comment below and let me know.

Nick struggles with a decision, as New Girl finally reveals Schmidt’s first name in the hilarious penultimate episode of Season 6.