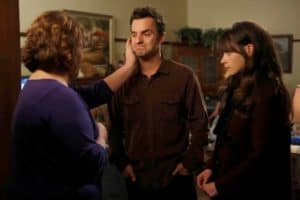 In this week’s episode, “Chicago,” New Girl continued its exploration of the man who has become this season’s central character: Nick “I Panic Moonwalk Away From People” Miller. As I’ve stated in other New Girl reviews and as I’m sure other reviewers have also said, New Girl‘s second season really has been the season of Nick Miller. Therefore, it is fitting that we would get another episode that not only focuses heavily on Nick but actually introduces us to his home in Chicago and to the colorful individuals that make up his family, as Nick must deal with the weight and severity of his father, Walt, passing away. Overall, it’s a fairly solid episode of New Girl that is more interested in dealing with the heavy emotions of Nick father’s funeral than making us laugh, but “Chicago” still provides enough solid punchlines and wacky scenarios to make it funnier than 99% of the other sitcoms on TV.

As stated above, the central conflict that drives this episode of New Girl revolves around Nick’s father’s death and whether or not Nick can reconcile with the man his father was in order to write and deliver a proper eulogy. It’s a solid story that continues Nick’s “daddy issues” from “A Father’s Love,” but it takes it a step further by inviting us into Nick’s home in Chicago and allowing us to meet his mother, Bonnie, played by the always phenomenal Margo Martindale (Justified, The Americans), and his younger brother, portrayed by Nick Kroll (Kroll Show). Kroll does not get a lot to work with here and mostly just delivers dumb, crass comments. Martindale, on the other hand, gets to channel Justified’‘s Mags Bennett one second, as she tells Jess off at the funeral (““Are you tapping me on the shoulder, girly?” she delivers chillingly), but also has some lighter, warmer moments, like doing her own Elvis impersonation or uttering kind words of love in her closing scene with Nick.

By seeing these family members and the responsibility that they force upon Nick, we gain a better understanding of exactly who Nick Miller really is. He’s not some lazy screw up with no ambition; he’s a man with a deadbeat for a dad, who comes from a wacky and dysfunctional family that always places the burden of responsibility directly on his shoulders. In the moment we discover this, we (and Jess) realize that Nick is fully capable of being a caring and dependable person but was possibly forced to grow up too fast and needed the freedom of the loft and the bar he works at to escape the sweltering expectations of a family that expected so much from him and unintentionally took it all for granted. Not all of this is spelled out for us (and this may be only my interpretation of it), but it’s a great use of backstory that not only shows us who Nick was but who he has the capability of being.

“Chicago” also serves the greater Nick and Jess story that New Girl has been telling all season, as we see Jess, totally out of her element around Nick’s family, step up and be there for Nick in a way no else could be. Despite the fact that their friendship is in a weird place right now, as the two of them skirt around the idea of romance, Nick and Jess still possess the most powerful and intimate connection on the show, and Jess’s actions in “Chicago” (and Nick’s reaction to them. Seriously, go back and look at his face during Jess’s Elvis impression) solidified this. As Bonnie tells her son as she hugs him goodbye at the end of the episode, “I’m glad you have someone to take care of you,” and no character on this show does a better job of taking care of Nick Miller than the one and only Jessica Day. 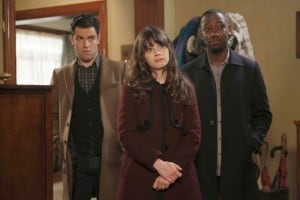 Other thoughts and Best New Girl Quotes of the Night:

– Schmidt’s fear of dead bodies was completely neurotic and so “Schmidt” it’s not even fun. Also incredibly true to his character: only Schmidt would turn a funeral into a competition. “ALL DAY, Boston! ALL DAY!”

– Loved how Winston still felt the greatest connection to Nick’s father, causing him to comically break down at the funeral and to steal several of Walt’s old belongings, including the leg to his favorite chair.

– Zooey Deschanel did a hilariously bad impersonation of Elvis, but I’m still not sure how I felt about that sequence as a whole. New Girl loves wacky, awkward situations and the goofy humor that they provide, but I wasn’t buying into this one as much as I usually do.

– “Look at all these buttons, Winston! I look like a remote control. I can’t mourn in this. I don’t even know how to use these buttons.” — Schmidt to Winston about having to wear Walt’s suit. Max Greenfield’s delivery of the word “buttons” as “butt-tons” was hilarious.

– “I really feel transported to the ghetto.” — Schmidt.

– “I don’t know if Walt was a good guy or a bad guy in the whole scheme of things, but he was my dad, and I’m sure gonna miss him” — Nick giving his father’s eulogy. Jake Johnson really knocked this episode out of the park.