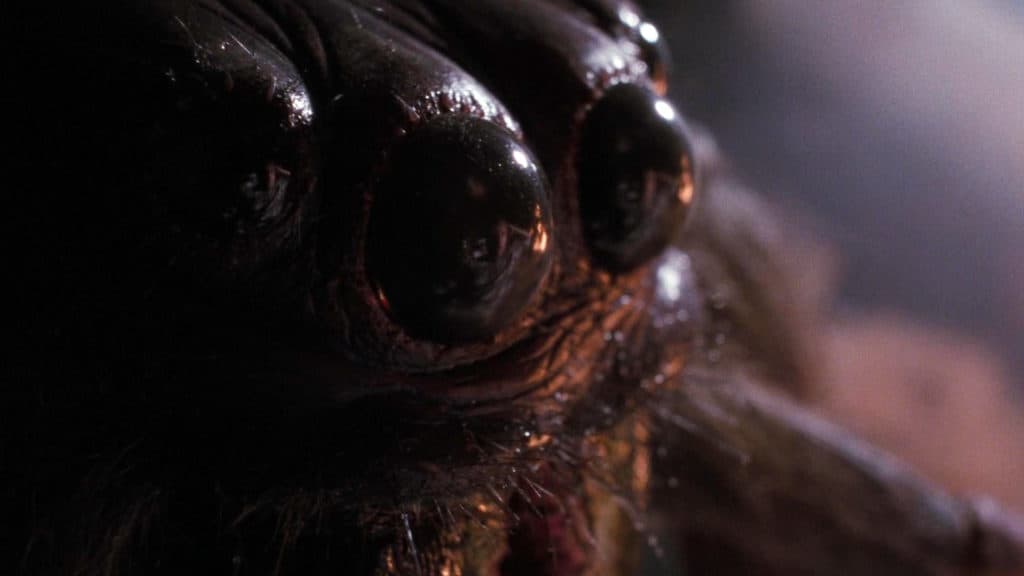 Nightmare fuel in a movie is more about unnerving the audience than the characters, but it’s mentioned both ways since there are some things that you might see in a movie that you can’t unsee no matter how you might try. It could be something that’s insanely terrifying and haunts you both day and night, or it could be something that might not be that bad when you really step back and look at it. But the truth is that those scenes in the movies that qualify as nightmare fuel, and there are a lot of them to be certain, are those that stick with us because of some trigger they unwittingly hit that elicits a response in a person no matter how much a person tries to deny it. The type of nightmare fuel that gets a response from one person might be entirely different from another though, and there are plenty of moments in the movies that have nothing to do with horror that might gain this designation. Thanks to the holiday though I’ve decided to stick to horror, or something close to it, just to make it a little easier to understand.

Here are ten moments when a movie produced the most potent nightmare fuel for many moviegoers.

It goes without saying that there are some moments I probably shouldn’t show since it might upset a few people, especially the image in question in this movie where Jacob witnesses an unknown creature impale his girlfriend. Throughout the movie, there are plenty of disturbing images, but this one definitely takes the cake since the frenzied movements and action that leads up to it kind of sets the stage for the moment that’s there and gone thankfully.

This entire movie was kind of goofy, but there were a few moments when the terror spiked just enough that it made a lot of people jump. The image of Deke being caught by the goop in the lake wasn’t all that bad, but it was nasty to see it eating away at his foot and ankle. But the real nightmarish image came when Deke, who was still fighting with everything he had, had his leg literally snapped in two as the sole of his foot was aimed skyward at an angle it shouldn’t have been able to accomplish.

There were some folks that liked this remake and some that called it ridiculous. All I know is that when the little girl that helps to kick off the story looked up, snarled, and then RAN toward the door, foregoing the shambling that most zombies do, I perked up along with many other people. The fact that zombies can move at all is enough, but allowing them to sprint for their food is downright creepy.

This thing is undeniably creepy since one has to wonder if it was created for a special purpose, if it’s the result of a punishment inflicted upon a formerly living person, or if there was an actual species like this way back in the day. It feels likely that it would be nearly impossible to sneak up on a creature like this with anything but a natural 20 on a Stealth check (yes, I am a D&D nerd).

Spiders are insanely terrifying to some folks, and while I’ll admit that I don’t like the eight-legged buggers, so long as they’re outside the house I’m good with them. But these supercharged arachnids that could kill with a bite are the type that no one gets along with since they’re an obvious threat that will go looking for humans apparently. Just be glad that spiders don’t typically see us as a food source.

There are a few scenes in this movie that are rather disturbing, but the moment when Eddie reveals that he’s alive to Karen and proceeds to dig the bullet out of his skull so that he can transform presumably, the camera pulls in closely in order to allow a grisly view of how he manages to pry the hunk of lead from his head. Yeah, that’s an image that won’t go away after all these years.

The xenomorphs are creepy enough without hiding in plain sight, but when the Colonial Marines make their way to LV-426 they have little to no real intel to go on since even Ripley can’t tell them much more than the first-hand experience she had, which may or may not help them. But when the creatures start coming out of the walls, where they were nestled so perfectly as to become a part of the scenery, one can’t help but shudder to think of how expertly hidden they were.

So here’s a quick tip, when your TV turns itself on after you’ve turned it off, don’t sit and gawk at it, especially if you’ve already been made aware of something weird happening with a killer VHS tape. If the TV starts leaking and something starts to come out of it, a person should exercise the sensible option and just run.

2. Godzilla: King of the Monsters

The one image that sticks with me at this moment doesn’t have anything to do with the epic battles, but instead the scene in which the three heads of Ghidorah are seen to loom ever closer, malice intent in their eyes and their jaws clenched so tight they appear to be grinning. Yeah, at that point it’s best to just accept the inevitable and hope that you’re heading in the direction you want when the lights go out.

You’ve really got to feel for this kid since the stuff she had to do for this movie is insanely harmful, and there has been an account of how badly she was hurt during the process. But apart from that, if your kid comes crab-walking, backward, down the stairs while drooling blood, it’s time for the young priest and the old priest, the ER can wait.

Oh yes, there are many, MANY more moments that people can name.