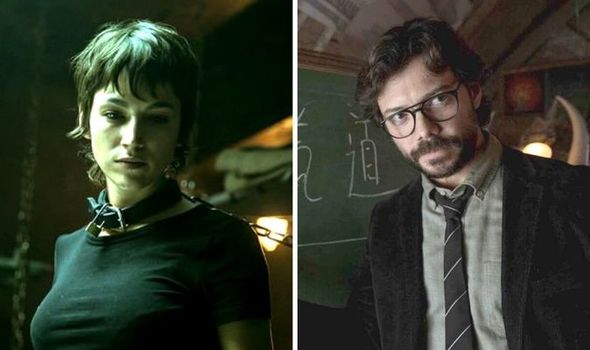 Unrequited love is a major theme in medieval literature, much great medieval literature comes by way of the histories and writings of Spain, so it makes sense for this theme to saturate the plot of Casa de Papel, or Money Heist. Throughout the seasons of the show there have been many examples: Tokyo and Rio, Berlin and Palermo, Helsinki and Palermo, Nairobi and Helsinki, Denver and Manila, and lastly, the Professor and Tokyo. In the second to last episode of the series there is a flashback moment of a party that ensues amongst the gang as they prepare for their heist at their “school” in the villa. The party begins with the Professor (Álvaro Morte) angrily bringing a large dead fish from his bedroom to the table where the rest of the gang is kicking back and relaxing. The Professor chastises the group about how easy it is to relax if you are not thinking all the time– stressing the details about missions that are life or death at any moment. He then, amidst his grandstanding, begins taking shots of liquor and lights a cigarette, saying, “no class tomorrow.” He hits the play button on the boombox and begins to dance with his back to the table. Everyone is shocked, as children who just witnessed their dad have a mental break. They realize the Professor is truly set on letting loose and they join him in the impromptu fiesta.

Hours later that night, but shown as a flashback, the Professor stumbles his way to the dancefloor in the courtyard to find the only one left: Tokyo (Úrsula Corberó). After flirtatious pleasantries and small talk, the Professor says, “I love you very much… very much”, to Tokyo. Tokyo replies, “me too.” She then goes onto explain why she and the group adore him, cutting his statement down to an appreciation of who he is to them as a leader and a man always watching over them with their best interest. However, by the look in the Professor’s glazed drunken eyes, he meant “te quiero mucho” in a very different way. Knowing a bit of Spanish is helpful here, because the phrase “te quiero” can be said in many different ways and contexts to many different people– it does not always mean I love you in a romantic way. The phrase can mean: I want you, I love you (romantically), I love you (as a friend), I love you ( in a familial way). The context is what matters when this phrase is uttered. He also did not say “Te amo”, which always means I love you, but can be meant both romantically or to those you consider close or family. The distinction is important and can be argues either way in terms of this specific scene, but the context of the scene, two drunk people, at dawn after a night of partying, alone, and both (sort of) involved with other people, begs to be dissected a bit more.

Everyone in the den of thieves throughout the years has been drawn to Tokyo one way or another. She is the epitome of freedom. Young, beautiful, passionate, and has a wild side that is attractive in that she appears to not care how her decisions affect others, while others know she cares deeply for them. Tokyo is unpredictable and emotionally driven mad at the chance to experience life anew each day. These qualities bring those around her to want more out of their own lives. These characteristics can be found in another character in the Money Heist that as well did not survive to the end: Berlin, brother of the Professor, played by Pedro Alonso. Though Berlin passed away in season two, it is a joy to see the early developments of the plots and the lives of Berlin and the Professor. Alonso, who plays Berlin, is a master of his craft– the simplest expressions in times of misery and jubilation carry with them such a fantastic reality that it is no surprise that a spin-off starring Berlin will begin production in 2023. The brilliant character that develops within Berlin makes the viewer better understand how the Professor is drawn to the maniacal fancies of his brother. We gain an understanding of the dichotomy of the two brothers in a flashback scene. Berlin’s son, Rafael (Patrick Criado), at one point while sitting with his father and uncle, asks his uncle, the Professor, why he steals. Telling his uncle that he is intelligent and calculated, and it simply doesn’t match him. Rafael says that he would expect this behavior from his father, Berlin, because of his father is a heathen– always in search of love, wine, travel and fancy. Though this scene has deeper significance to the overall ending and the arc of the show, this comment of Berlin being a hedonist is pertinent to his similarities to Tokyo, and thereby the Professor’s romantic interest in Tokyo.

The Professor is nothing like Tokyo or Berlin. As stated, the Professor is cols an calculating, always thinking ten steps ahead and having a contingency plan for all possible outcomes within a robbery or potentially violent situation. This overthinking extends to his personal life as well. The Professor’s relationship and love for Lisbon (Itziar Ituño) matches his personality. Though they did not fall in love in the most conventional way: kidnapping, murder, etcetera, their relationship is predicated upon his desires and control, not entirely hers. The Professor finds Lisbon’s personality, way of thinking, and behavior suiting for him in a pragmatic sense, tampering down his more hedonistic desires for someone he could not control, like Tokyo. Even in the sense of his brother, Berlin, the Professor has a deep love and connection to his spontaneous brother, because he is not like him in many regards. In most people, there is a latent curiosity to come closer to or experience something or someone that is foreign in nature to their way of operating. This is what the Professor finds in his love for Tokyo. Though the series is about a group of strangers stealing, what has made millions around the world watch the show in dozens of different languages are the complexities of the characters and the love they share for one another. With love, there is always some felt or spent unrequited, to the ache of the bearer. Whether or not the robberies are successful takes a backseat to the feelings of joy and love and pure heartache that is experienced by the characters that each viewer grows a connection to.