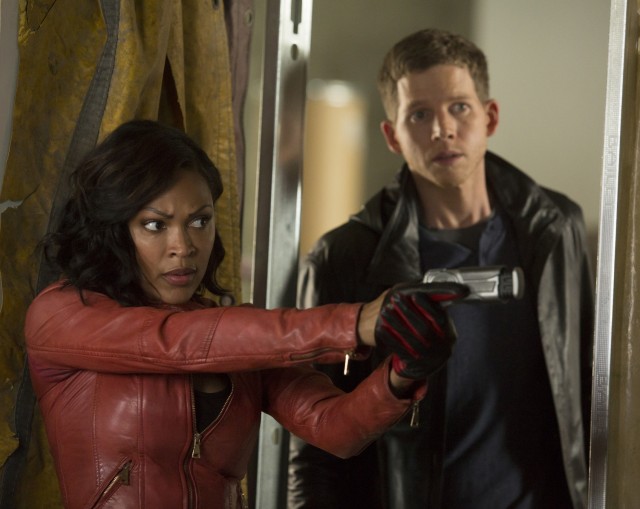 Minority Report is a criminally underrated film in Steven Spielberg’s catalog, a futuristic noir that also happens to be an extremely intelligent post-9/11 blockbuster. It’s a movie about free will and the concept of “destiny,” while also a surprisingly progressive look at the potential cost of “protecting our freedom” in a world where the Patriot Act exists. Minority Report the TV show, however, is none of these things, a thoroughly lifeless crime procedural that would rather namedrop Iggy Azalea and Tinder (despite taking place in 2065) than engage with the post-PreCrime world it presents, awkwardly stumbling through a checklist of pilot prerequisites en route to one of the most ridiculously anti-climatic endings in recent network history.

On all levels, this show is an absolute disappointment, a green screen-filled mess of genre tropes and trite characterizations so concerned with establishing a Mad Libs script formula for future episodes, it completely ignores the potential of revisiting one of the most richly-realized science fiction worlds in cinematic history (seriously: Minority Report is no freaking joke, even though it has crazy eye transplants and psychic children who were once crack-addicted babies in comas). Meagan Good stars as Lara Vega, a detective with absolutely no back story who gets pulled into some unnamed conspiracy next to Dash (Stark Sands), one of the pre-cogs all grown up and separated from his siblings after reintegrating into normal futuristic society. “Pilot” revolves around Dash’s latest vision, where he sees a political assassination happening, pulling in Vega to help him reconstruct a crime he can somehow see most of, even though his powers are apparently terrible without his dick brother (played by Nick Zano) around to complement his ‘gift’ –  even though in the FIRST SCENE of the series, we see Dash do the very thing we’re told his brother is better at doing.

This is the kind of logic Minority Report operates with, though: it doesn’t care if it explains every single character motivation and plot detail through boring exposition, or that it never explains how these future police are building (and affording to build) all of this new technology. Instead, we get scenes where Vega’s mother talks about meeting her father on Tinder (because Tinder will be huge for the next 40 years, and inspire a lot of happy relationships), and horribly written scenes trying to force a future romance on the two main characters, who have all the chemistry and energy of a damp sock and a shoelace.

It can’t even get the simple details right: while in the film, the infamous “hand swipe” motions were designed to look like an orchestral conductor’s movements (and totally do), Meagan Good is doing some awkward, virtual reality version of a pop and lock dance in what might be the most idiotic-looking “canvassing a crime scene” moments I’ve ever seen on recorded video. Seriously, it’s ridiculous: she’s poking her hands and swiveling around, making forceful motions in every direction while talking in stilted ‘detective talk’ fashion, a thoroughly ludicrous vision that only sums up how utterly mindless all of this is. Without the understanding of those simple details, Minority Report (the TV show) immediately feels like a cheap imitation – feelings that only exacerbate when observing the show on a broader scale, where it becomes clear this “sequel” is completely devoid of any basic intelligence.

In the opening voice over explaining the events of the film, there’s an important fact brushed over by Vega: she barely mentions PreCrime being shut down, only that the program was suddenly abolished and the pre-cogs were sent far away. There isn’t even an attempt at explaining the reason why this happened, or why ending this program mattered: the entire philosophic debate underlining the film is thrown to the wind, and it feels intentional given how there’s no discussion about how and why Pre Crime was shut down. It’s just a thing that happened – like the Washington football team changing their name to the Red Clouds in the future (what a surprise – the world makes the team change their racist name in the next 50 years? What a prediction!!!), or the weird conversation where Vega explains to Dash that he sought her out because he never had a mother.

In the end, Vega embraces the technology that is ultimately rejected by every character in the film: there’s no such thing as a crime that is destined to happen, a fact Dash LITERALLY PROVES when saving her life. Which is preposterous: all we’re told is that Vega worshiped the Pre-Cog program as a kid, and therefore will blindly follow any vision that Dash has (or Arthur, for that matter – who is one of two characters who lightly sexually harass Vega in this episode), even though the program was defunded because it was imperfect, and therefore was completely illogical. She KNOWS this, and yet still embraces this: and without anyone intelligent around her to even try and contextualize this in an interesting why, there’s an embarrassing lack of exploration into Vega’s thought process in trusting Dash (and by the same token, him to himself), further undermining the debates the film layers in the first two acts of the film (and the epilogue, if we’re to believe popular theories about the ending).

It’s pretty early in the season to say this, but Minority Report might already be the most disappointing new show of the fall: knowing this show was being piece-mealed into a by-the-numbers crime procedural, I wasn’t exactly entering with high expectations, either. It all just feels so focus-grouped to death, hampered by its need to explain every single stupid detail that doesn’t matter – or have Vega yell at someone to tell the audience exactly what they’re thinking and feeling- and dangle the carrot of big things to follow, qualities that poetically personify the uninspired, sterilized mess of desperation of the pilot. Can we give The Mob Doctor a second chance instead?