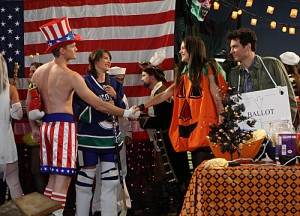 In other news, Barney is a quarter Canadian and Lily has major pregnancy brain. Last night’s holiday themed episode of How I Met Your Mother brought us some laughs and some groans and overall was a very uneven episode. So let’s suss out the good and the bad, shall we…

The Good: Robin and Barney. Canadian vs. American/quarter Canadian.

Every time I found myself laughing out loud last night was at these two. Robin’s incessant nagging of Barney’s Canadian ancestry was hilarious and totally called for given all the crap he’s given her about her heritage over the years. His entrance to the party set to ‘Living in America’was epic as was Barney crying in the mirror in his Mountie costume. This whole storyline was a win and I hope Robin continues to tease Barney all season. Also I loved the Ducky Tie wrapped around his arm.

The Marshall/Lily plot of the night was nothing spectacular but overall more fun and amusing than Ted’s. I especially enjoyed Lily’s inability to say things correctly at MacLaren’s.