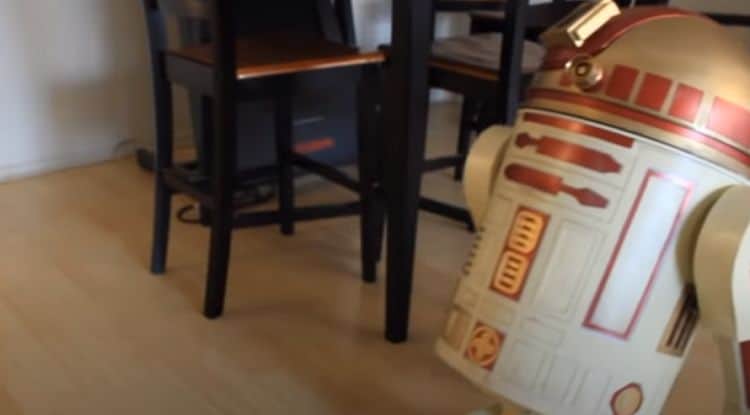 You’ve got to give this guy major points for creativity since it’s not everyone that looks at a Roomba and thinks about how they can turn it into an R2 droid with a few items around the house and a couple that might need to be purchased from the nearest Best Buy or similar store. Granted as it was mentioned it can’t really perform all the functions that the regular Roomba can, since an astromech droid can’t exactly flatten itself and get the spots beneath the furniture where a Roomba normally goes, but the novelty of it is too great to pass up since the use of a trash can and other items in such a way is kind of amusing really. Someone in this house is either a Star Wars fan or had a moment of inspiration that they couldn’t let go, or both. Michael Roffman of Consequence of Sound had more to say about this.  It does help that George Lucas decided on the form of the R2 unit so long ago and kept it fairly practical as the years moved along, not changing it that much really even as other droids were introduced in the movies and the franchise at large. When you look at it there are so many different types of droids that it would be hard to list them all, but the R2 series is likely one of the most versatile considering all the functions they were able to show in the movies.

Think about it this way, R2-D2 was a multi-functioning droid that despite his shape and size was able to do a large number of things, far more than C-3PO ever did. A lot of that can be chalked up to the fact that C-3PO was kind of limited by his programming, given that he was a protocol droid and was designed to be an interpreter and also had a very hard time bringing himself to do anything that he felt was beyond protocol. R2-D2 never had that problem since he did what was needed more often than doing what was programmed into him. For whatever reason the little droid was one of the most personable characters in the story, his chirps and warbles saying a lot about his overall attitude and amazing persona. It’s funny to say such things about a droid, which was created by sentient being and put together rather than grown. But the argument that could stem from this about the value of sentience and what it really mean would be a long and drawn-out affair that would require another article and much more time. Out of all the droids in Star Wars there were a handful that showed a very distinct sense of self and appeared to know their place in the way of things, but R2-D2 and C-3PO were undeniably the most outspoken of the bunch. Brian Wallace of The Dork Side of the Force might agree with that statement.

Putting a fan that can turn the head does add a bit of character to the droid in the clip, as does the use of the bluetooth speakers that deliver the warbling that is recognizable as droidspeak. Someone put a lot of work into this thing and as a result it came out pretty well, though as far as cleaning the floor as well as it possibly could it’s kind of obvious that a bit of function was given up for the look. That’s okay apparently though, the end result is a droid that still sweeps, mops, and can still make its way around the house pretty much on its own. It’s true though that it might run into things a bit the Roomba isn’t a sentient thing, thankfully, and is more like a pack animal dragging around something that a human decided to saddle it with. Eventually the Roomba will run into something it can’t account for and the top will prevent it from going any further. Plus it does look as though it needs a bit of help now and then as it moves about, otherwise it might run into certain things that it shouldn’t. All in all though it’s a nice effect and one that is no doubt bound to be copied by at last a few people if it hasn’t been already. Would the average individual follow this example? Well, maybe, but it all depends on there’s a practical reason for it other than to just do it because one can.

One might think that it’s a lot of weight for a Roomba to carry, and it kind of is since a lot of Roomba’s aren’t asked to carry 14 lbs. of weight along their normal track, or forced to skip certain areas because of low clearance. But again, it’s got to be mentioned that this person really did a great job on the construction and the look of this thing since it came out great. It’s not every household that has a cleaning droid after all.