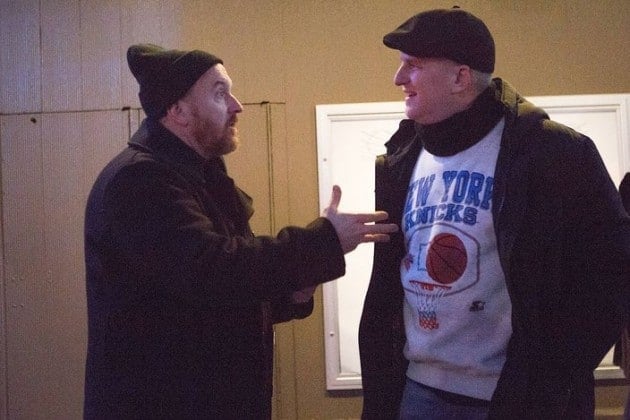 Louie visiting friends or past acquaintances on Louie always leads down an interesting road – look no further than the show’s single most fascinating scene in season 2’s “Eddie,” where a fellow comic informs Louie he’s going to commit suicide. There are tinges of “Eddie” in “Cop Story,” an episode that is as ambitious as Louie episodes can be, a reminder that Louis C.K. remains the master of philosophic contemplation on modern television (okay, Rectify, but you get my point).

“Cop Story” even feels like an early-season episode of Louie, adhering much closer to the vignette-esque construction of early years, before Louie dipped its hand into more experiment, serialized storytelling. It’s mostly Louie walking around the city or sitting in his apartment, save for the opening scene where Louie gets dressed down by an arrogant Manhattan business store owner (who, like many retail professionals, is perpetually “closing down” long before the store actually closes for the day, my favorite little touch of the episode).

That proprietor – who Louie initially dismisses as just a bad employee – opens a dialogue that, as Louie “scenes” (you know what I mean by those quotations) often do, doesn’t disguise itself very well. Louie pokes at her for not wanting to help him, and she launches into a tirade about how she doesn’t waste her time stroking the egos of people (“by a young Asian clerk,” she adds). The conversation then shifts to a generational debate, with Louie’s generation’s entitlement and our generation (I’m 27; am I too old for the “younger” generation of this episode?), and ends with one very decisive line by the store owner:

“You have this deep down feeling, that you don’t matter anymore.”

That scene gives way to the opening credits (Louie walks away, dumbfounded), and then immediately shifts when a cop begins harassing Louie as he walks down the street, a cop that turns out to be his sister’s ex-boyfriend, Lenny. After a not-so-pleasant turn on this week’s Black-ish episode, Michael Rappaport’s incredibly intense, unsubtle style turns out to be a great tool for “Cop Story,” which paints Lenny as this aggressive (he’s constantly physically assaulting Louie in a “playful” way), frat boy police man, filling the unfortunately familiar stereotype of those who try and use their police badges to get into New York Knick games, and generally act like an entitled fraternity who are too busy reminding people who they are to actually do their job (at one point, Louie drops a gun on the ground as a group of police officers exit a van, laughing and joking – none of them notice Louie’s panic sweats or the gun they step over).

Rappaport’s first scene alone is fascinating: under the guise of saying hello to an old “friend,” Lenny harasses Louie with his police horn, forcefully takes his cell phone out of his pocket, forces him to give him his pass code (while commenting on what a joke his phone is), coerces him to hang out with him by providing vague potential benefits (benefits, it turns out, he can’t procure), and even threatens him, telling him “you can’t say you’re going to hang out with me then not hang out with me.” He even explains the virtues of this kind of behavior to Louie, telling him about how screaming in a guy’s face and being overtly aggressive is how he gets most people to just “give in” and listen to him.

From the start, Louie is drawing parallels between himself and Lenny: Louie’s attempts to coerce the store clerk into helping him “stroke his ego” ($2,000 on cooking supplies? Really, Louie?) are identical to how Lenny acts out his arrests, or gets a friend to hang out with him. That alone is a pretty genius move, but what is even more impressive is how Louie turns this personal reflection on inter-generational relations into a very scathing, revealing study of the law, and why there’s so much tension between police and young people, especially in the city.

But that is all easy to parse out, from Rappaport’s performance putting the frattish, entitled braggadocio/borderline bullying that so often defines “police work” in this day and age. That information is obvious, but vital: ultimately, Louie is always concerned about mid-life crises, and how that period of life often offers us windows of genuine, meaningful reflection, information that Louie conveys to the next generation of the world as an example of how life never, ever gets less confusing. In this episode, however, that mid-life crisis takes a decidedly dark bent, as Lenny slowly reveals the deep regrets he harbors; never being loved by Louie’s sister (or even friended on Facebook), left to rot in patrol for two decades and never advancing in his career, and having a personality that naturally is off-putting to a lot of people has turned Lenny into a very different man than what’s initially presented to us. Lenny feels like he doesn’t matter anymore; and if someone feels like that, either as a cop or a human being, how can they really enjoy life at all?

How can a police force that’s been turned into a military convoy connect with a community they don’t want to be a part of? How can people trust an increasingly aggressive, violent police force desperate to maintain some cloudy ideal of right and wrong? Or, conversely, how can a group of people alienated and distrusted by the community do its job effectively? These are the kinds of questions that “Cop Story” is openly asking, showing a police force that is no longer united (Lenny calls a fellow cop an a-hole after he doesn’t do the friendly cop thing and let them into the game) and so isolated from the rest of the community that they move in packs and ignore everyone they don’t currently suspect is doing something wrong. However, more than that, Louie is asking questions about identity in the modern age, and how attached we can be to a singular image of something. Cops feel aggression is the only route to take; so by the same token, we offer resistance. Lenny loses the gun he’s thought about killing himself with, then breaks down without the only object in his life that gives him meaning, or purpose (which is pretty scary, considering it’s a LOADED GUN).

There’s so much swirling around these scenes, I encourage people to watch the episode twice. The first time through, watch it as one of Louie‘s episodes reflecting on modern life, as a reflection on policing in our society, and the twisted animal it has morphed police into along the way, throwing the symbiotic relationship between cops and the communities they protect into a dangerous, irreversible tailspin. The second time, view it as the typical angst-filled Louie episode, one as concerned with passing the baton to the next generation as it is what happens to those once they’ve passed it on, and how finding a lonely man’s lost gun can lead to a meaningful human connection (between two people that clearly don’t like each other, to boot).

What’s amazing is how these two stories work in beautiful unison with each other; the disconnect between generations and police with society make for some neat parallels, nicely feeding into the other as Louie spends an evening with a lost soul, and learns a little something about the world today along the way. Even though the episode lacks any sort of stand-up segment, this is as signature a Louie episode as they get, another memorable entry into Louie‘s increasingly impressive catalog.