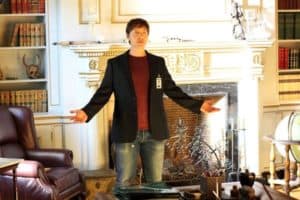 Quick Recap: Our last new episode of Lost Girl ended with Dyson, Lauren and Bo’s Mother all captives of
Lauren’s maniacal boss. Meanwhile Trick had been kidnapped and Kenzi was about to be taken into custody as an enemy of the “One True State”.

This episode starts off almost immediately after the last episode. Outside Taft’s compound Bo cannot revive Tamsin from her gunshot so she takes her back to the loft. With the help of a few Fae, they get the bullet out of Tamsin and she comes too. Tamsin is nearing the end of her lifecycle though and is getting weaker and weaker. Bo is glad she is alive but she doesn’t have time for chit chat, she needs to rescue Dyson. Tamsin suggests they find the Druid dealer to get juiced up before attempting to rescue anyone.

Bo takes a moment to call Kenzi who says she is fine, when really she is being held by a monstrous security guard in the basement of The Dal in front of The Morrigan.  In true Kenzi fashion she is running her mouth at The Morrigan. The Morrigan doesn’t want to kill Kenzi though, she has other plans. Plans that involve Trick dying, Hale running off and the Light falling.

Over in another cell Lauren is helping her cellmate when Taft comes by. He needs her for more research. She agrees to help him but only if he will get her the supplies she needs to save the Fae in the cell with her. He agrees.

Bo and Tamsin pay the Druid a visit. It’s the Druid that kissed Kenzi, maybe there is only one Druid, I don’t know. When Bo walks away the Druid hands Tamsin a special bottle. She hides it from Bo.

Taft is explaining to Lauren why he is doing all of this to the Fae. His brother was taken by Fae when they were little and camping in their tree house. Well they didn’t take him exactly, they beheaded him. Everyone blamed Taft and he was shipped off to an asylum. He was determined to figure out what really happened and that is how he discovered the Fae. Lauren warns him this will not end well for him but Taft doesn’t seem too worried. He tells Lauren to flee if she wants, the Fae won’t believe a deserter like her, and besides she is the only one that can help the human race ascend. His plan is to extract the stem cells from the strongest Fae (Dyson) and have them injected them into him so he can become a Fae/Human hybrid. Lauren voices what everyone is thinking — he is insane.

While this is happening Bo and Tamsin are outside the compound feigning being lost and confused so they can be taken inside.

The Morrigan still has Kenzi in the basement of the Dal. She insists anyone who could help Kenzi is dead or long gone. She has questions about Bo’s lineage, something she is willing to torture out of Kenzi. The Morrigan tries to taze Kenzi, but it looks like Trick has the place protected. The Morrigan tells the massive security guard to take Kenzi somewhere where he can end her life before The Morrigan makes a grand sweeping exit.

Back at the compound Bo is being led in to see the Dr. Taft. He is glad to have another addition to his collection, but Bo assures him she is only there to get Dyson. Lauren comes out and makes a snide comment about Bo being there to save Dyson. Bo offers to save them both but Lauren says the Fae ruined her life. This is her chance to do something meaningful. Bo says she has been brainwashed, but Lauren cuts her off. Lauren turns to Dr. Taft and says she will do the surgery if Bo is allowed to leave, unharmed. Bo is so thrown she gets led back to her cell with very little resistance.

Dyson, meanwhile, is strapped onto a table in an operating room when Dr. Taft visits him to talk some crazy psychopathic babble before leaving to get ready for the transplant. Lauren comes into the operating room to begin the procedure; she starts by extracting bone marrow from Dyson.

Tamsin and Bo are in the same cell now discussing what to do next when they see Aife in another cell. Aife starts talking about how if Bo’s father was there he would take care of this, he would kill them all. Bo can’t get a straight answer out of her though so she and Tamsin power up for the next part of their plan.

At The Dal, Kenzi has somehow managed to charm the security guard and is helping him figure out a way to tell The Morrigan he wants to quit. Kenzi is just glad they are in the basement of The Dal so no violence can come to her. The guard says it isn’t The Dal that is protecting her, it is the trinket in her pocket. The trinket Hale put in her pocket when he kissed her as a distraction. The trinket is what is keeping her from harm. The security guard says it is weird she has it because it is usually passed from father to son. Kenzi gets teary eyed and says, “Oh Hale.”

At the compound Bo and Tamsin are staging a fight to get the guards attention. The guards open the cell and Tamsin does her thing, making all of the guards unconscious. The effort seriously drains her and Tamsin passes out shortly after. Bo opens the cell doors for the rest of the Fae and runs into Dr. Taft’s office with her mother. There she finds Dr. Taft with Fae speed, spouting on about how he has been reborn. He super speeds towards them with a knife in his hands. Aife jumps in front of Bo, getting stabbed in the stomach in the process. Before Dr. Taft can think about what has happened Dyson comes in another door and kills the security. Taft freaks out and runs off with Dyson right behind him.

Bo’s mother is dying on the office floor when Tamsin comes in, they need to leave. Bo doesn’t want to leave her mother but one of the other Fae is there and she says she wills stay with Aife while Bo finishes Taft. As soon as Bo leaves the room Aife opens her eyes and steals the qi of the Fae who was sitting with her.

Tamsin gets Bo into the operating room where she says it is now time for her to go. Bo says she never trusted Tamsin. Tamsin says it doesn’t matter; she pulls out the bottle from the Druid with the potion, “One hair from someone you trust, two from someone you love and three from your own head. Woven together by the kiss of someone who will never betray you.”

Except it doesn’t work. Tamsin says that maybe Bo doesn’t love and trust the way she claims. Tamsin gets mad and rushes Bo. Bo grabs Tamsin’s face and steals some of her qi. The fight goes full on punches, kicking and throwing things. Bo has the chance to finish Tamsin but she lets her go. She can’t finish her off. Tamsin is scared though, seriously shaking and tears scared. Bo tells her it will be okay, they will regroup and get somewhere safe.

Across town Hale lets Trick out of the truck of the car and tells Trick his last job as Acting Ash was to protect The Blood King from The Dark. Hale says politics wasn’t for him. Hale gets Trick out of town until this whole fight between the Light and Dark can play out. As for The Morrigan, Hale has Vex keeping her busy.

Dyson catches up with Taft in a field outside the compound. Taft argues that Dyson can’t kill him now, they are basically brothers. Dyson doesn’t agree, for a number of reasons, but mainly because Lauren didn’t use Dyson’s DNA she used that of another kind of Fae. Taft tries to talk Dyson out of killing him but he is having none of it. He gives Taft a five second head start and changes into his wolf as he chases after him.

Outside the Dal Bruce, the security guard, walks Kenzi home. He isn’t letting Kenzi out of his site as he is worried about her safety. It’s rather cute. Kenzi says she is going to go visit the Druid so she can be Fae and be of some use to her friends. Bruce thinks that is a bad idea but he isn’t leaving her side so he gives her keys to The Morrigan’s very very nice car and lets her drive. 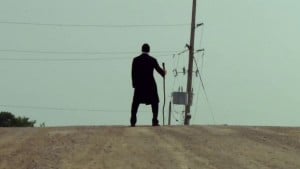 Dyson finishes off Taft and Tamsin is there to give him a ride. As they are driving “The Wanderer” by Dion comes on the radio. Tamsin looks up ahead and sees someone standing in the road. Dyson comments that he heard that song during Bo’s Dawning and Tamsin says it is Bo’s father. Tamsin hits the gas and speeds towards the man in the road. The man turns into a black cloud of dust causing the truck to go off the road and down an embankment.

Bo gets to the Dahl to find it empty, she is about to call Kenzi’s cell phone when all of the doors slam shut and The Wanderer” starts to play. Bo mocks his parlor tricks so he blows the lights out and engulfs Bo in the same black smoke before she disappears.

Thankfully Lost Girl has been picked up for a 4th season airing in 2014. Otherwise this cliffhanger ending would be downright unbearable.

Comments:
How nice is it when Dyson spends the majority of an episode without a shirt on?
Is there a better sidekick than Kenzi? She has the most fantastic snark.

Let me know what you thought of the Lost Girl season finale below in the comments.