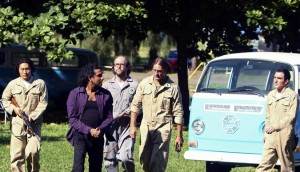 2007. Ajira flight 316 is still in the friendly skies, but not for long. Frank Lapidus’ co-pilot notices that Oceanic flight 815 passenger Hugo Reyes is on their flight. Cue the turbulence. Jack, Kate, Hurley, Sun and Sayid shuffle uncomfortably in their seats. They have no idea HOW they’re going to arrive back on the island. Cue the bright lights and ear piercing sounds of a Time Shift.

The plane was flying at night, but emerges from the turbulence in daylight. It is heading directly toward the mountains on the smaller Hydra Island. Cap’n Frank manages to avoid crashing into them, and lo and behold – the Others’ runway appears just ahead. That’s right, the one that Ben was having Kate in a Dress and Sweaty Sawyer help build in Season 3. No idea when and how it was completed, but Evil Genius must have known that this flight would one day arrive.

They manage a rough landing but the plane remains intact. Co-pilot gets impaled by a tree after they skid off the runway and into the jungle. Little Caesar checks on Mysterious Ilana and she notices that Sayid has disappeared, even though he was handcuffed and in her custody. All of the Oceanic 6 have vanished, except for Sun. Ben states the obvious, “they’re gone.” Thanks, Bug Eyes.

After getting off the plane, Ilana asks Sun if she lost someone. I think she already knows the answer. Lapidus channels Pilot Episode Jack and gathers everyone on the beach and instructs them to await rescue, while Little Caesar seems ready to explore the Hydra buildings. I think he knows exactly where they are and what he’s looking for.

Ben slips away from the group and Sun takes off after him in the jungle. Lapidus goes after her. Ben pretends not to know why Sun is following him and they discuss going to the main island where she can search for Jin. Lapidus questions Sun’s decision to trust Ben, but after Ben leads them to an outrigger canoe, she knocks him out with an oar. Lost fans everywhere cheer in unison. Sun is badass. 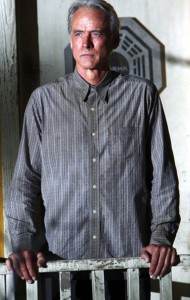 Lapidus and Sun take off in the canoe and arrive on the main island at night. As they walk down the dock toward Dharmaville, something is shaking in the bushes. It may have been Baby Smokey, before he had a voice or anger issues. It is unclear what era they are in, because Dharmaville is deserted and creepy. Cue ‘the whispers,’ followed by a surprise appearance by Christian Shephard. Sun asks if he knows where Jin is, and he leads them into the abandoned rec room where he shows them a photo of the new Dharma recruits from 1977. He tells her that Jin is with his friends, and that they have a long journey ahead of them. Ghost Claire, accompanied by horror movie white smoke, may or may not have appeared very briefly behind Sun during this conversation…

1977. Reunited and it feels so good. Hurley gives Sawyer a bear hug. Jack shakes his hand, and Sawyer and Kate share a hug but address one another informally (Freckles is SO 2004). Sheriff Sawyer tells the group that they’re in 1977. Jin and his bad perm freak out when Jack tells them that Sun was on the plane that brought them there as well. Cue reveal of previously named but never seen character – Radzinsky (Kelvin Inman’s Swan hatch roomie prior to Desmond)! Jin takes off in the Dharma jeep to The Flame station to find out if Radzinsky knew about the plane. Many of us were hoping to see a pre-eye patch Mikhail there, but no such luck.

Hot Mechanic Juliet asks Security Sidekick Miles if he knows where Sawyer is. They see him back at Chez Suliet. Juliet goes to confront Sawyer as he’s gathering Dharma clothes to disguise Jack, Kate and Hurley. He tells her that they’re back, and her heart sinks. But she reminds him that the sub is bringing a new batch of recruits that day, which helps him formulate a plan.

Cut to The Flame, where Radzinsky is working on a model version of the Swan hatch. [Side note: the last time we saw this model, Dr. Marvin Candle was pointing to it in the very first Orientation Film that Desmond showed Locke; the film was circa 1980]. Jin runs in and checks the dot matrix print outs, and Radzinsky mocks the very thought of an airplane landing on the island without his knowledge. To emphasize the urgency, Jin channels his former corporate thug self and throws Radzinsky against the wall, demanding that he call all Dharma stations to inquire. None report seeing a plane. Then a Dharmalarm goes off, and Jin takes off into the jungle because a Hostile is approaching. It is Sayid, but before they can share a bromantic hug, Radzinsky shows up. Jin has to play along and keep his cover, so he takes Sayid into custody.

Jilted Juliet approaches new mom Amy, who is chilling on a hammock only one day after giving birth. She has the sub manifest, which Juliet needs to alter in order to make Jack, Kate and Hurley the new recruits. Amy tells her that she and Horace have named their baby Ethan. Cue creepy recognition on Juliet’s face, as she realizes that she helped deliver her future Other cohort Ethan Rom.

Sawyer is driving Jack, Kate and Sawyer to the Barracks, where they will pretend to be new Dharma recruits. He mentions that Faraday has theories about why they’re stuck in time, but of course offers no elaboration. It seems that Faraday is no longer with them in 1977, however. After they arrive, Jin calls Sawyer on walkie to inform him about Sayid’s capture. 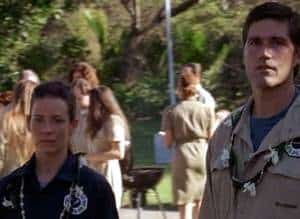 Jack is being processed by none other than Pierre Chang (a.k.a. Dr. Marvin Candle), who is bitter about being taken out of his lab to replace Amy. Jack is assigned to be a Dharma Work Man (janitor), just like Ben’s dad was. Nice one, Sawyer. Phil, the suspicious security guy, is grilling Kate because she’s not on the list. Juliet shows up with her paperwork. Awkward fake introductions ensue.

Sawyer shows up at the Flame and despite Radzinsky’s objections, takes Sayid back to the Barracks. Radzinsky is upset that Sayid saw the Swan model, which must mean that whatever they wind up burying beneath it (behind the concrete wall) is quite significant. Jughead, anyone?

Later that night, Jack goes to see the new Sheriff in town. He is surprised that Juliet answered the door at Sawyer’s house, and gives her a hug. If he figured out that they were shacking up, he didn’t acknowledge it. Sawyer is reading a book, and Jack thinks he should be working on a plan. Because even after three years, Jack is still a control freak with fixing issues. But Sawyer reminds him that he’s in charge now; he thinks rather than reacts. He dispatches the sober Doc back to his sleeping quarters, and then sees twitchy Kate pacing back and forth on a neighboring patio. They exchange awkward waves.

Sayid is being held in a small jail cell beneath the Barracks. A young boy brings him a sandwich and asks if he is a Hostile. It’s Little Linus! And, scene.