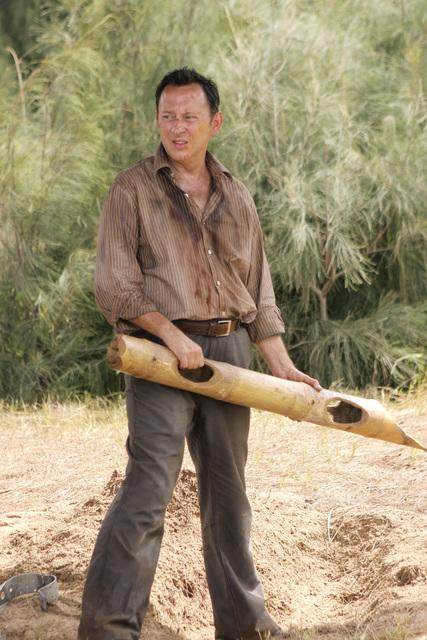 Somebody should just go ahead and give Michael Emerson an Emmy right now. In tonight’s episode, Emerson proved that he is the greatest actor on television. Period.

And the best part about Emerson’s performance is, it wasn’t the only great part of the episode. From the well-done opening to the stunning conclusion, the episode was definitely in the all-time top tier of LOST episodes, and will definitely prove itself to be a fan favorite later down the road, especially after that oh-so-brilliant ending reveal.

But before we get into the reveal and the consequences thereof, we should take a minute to analyze how well Ben’s story was done. This was his “redemption” episode, as many characters on the show have received (“Greatest Hits” for Charlie; “Two for the Road” for Ana Lucia). This probably means that Ben’s demise will be approaching with the end of the series, but his arc has proven itself to be the best of the series.

In the flash-sideways, Ben is a somewhat pretentious European history teacher, whom we last met in “The Substitute.” Only this time, he’s not just lecturing about coffee machines — he’s actually trying to usurp the school’s principal for the top job. And he almost gets away with it, too, until the principal turns the tables and holds a recommendation for Ben’s favorite student, Alex (his daughter in the original timeline), over Ben’s head. Ben, who apparently has developed a sense of nobility that the Island took from him later in life, decides against the power play, and Alex’s future — and Principal Reynolds’ career — is saved.

That story is mirrored by the one on the Island, in which Ilana uses Miles to discover that Ben actually murdered Jacob. Ilana, who viewed Jacob as a father figure, doesn’t take too kindly to this, so she chains Ben to a tree and forces him to dig his own grave. Practical, but harsh. A little help from the Man in Black, who has come to recruit Ben, frees our favorite Other, who immediately makes a break for it, and manages to obtain a gun that Man in Black has left for him. Ilana, after giving chase, surrenders to Ben, who then tearfully explains to Ilana why he killed Jacob.

It was one of the most beautiful instances of acting the series (or television) has ever seen, and I almost found myself crying along with Ben as he showed that he had seen the error of his power-hungry ways, which had resulted in the death of his daughter. He then revealed that he planned to take Man in Black on his offer to join him at the Hydra station, because he was the “only one that will have me.” Ilana, perhaps moved by his story or not wanting MIB to gain another soldier, invited Ben back to the beach camp. I sense a great dynamic brewing.

Speaking of great dynamics, Hurley and Jack departed from the lighthouse. Hurley, who had been trying to keep Jack from the Temple after being told about the massacre that would happen there by Jacob, was unsuccessful in his attempts to dissuade Jack. That is, until Richard showed up, and led them to the Black Rock, where he needed their help in killing himself.

Apparently, Jacob’s gift of immortality had a no-suicide clause that could only be circumvented with help from others. Richard, deciding to blow himself up with dynamite, got Jack to light the fuse. Jack did so, and then sat down, telling Richard that Jacob had chosen him, and therefore wouldn’t let the fuse burn down. When the fuse stopped short of detonation, Richard’s faith appeared to be at least partially renewed, and he agreed to postpone all suicide attempts until he’d at least had a centric episode.

Jack, Hurley, and Richard then travelled to the beach, where they reunited with Ben, Ilana, Sun, Frank, and Miles. Sun was quick to hug everyone (in typical montage fashion), while Ben stood awkwardly to the side. We didn’t see what Richard was doing, but he was probably doing about the same.

And then, a game changer: a pan out to the nice blue ocean, where there’s nothing going on but waves, fish, and — a periscope?!?! That’s right — LOST isn’t done with badly-CGId submarines (that’s a joke — what we saw this time wasn’t nearly as embarassing as that awful submarine from “Follow the Leader”). Also, LOST isn’t done with Charles Widmore, who has apparently found the Island and arrived there personally via submarine. Apparently, they’re planning some sort of invasion, and the presence of the survivors on the beach isn’t going to stop them.

Wow. The episode was absolutely fantastic. That’s not to say that there weren’t a few flaws in the episode — characters asked too many questions and didn’t receive very meaningful answers for them, and we had a bit of a too-meaningful “what could have happened?” speech from Roger Linus, that seemed contrived slightly.

However, the overall effect of the episode was to add a completely new layer to the characters of both Ben and Richard, and it was incredibly effective at that. Miles was also fantastic in the episode, especially in the fact that he apparently dug up Nikki and Paulo to get some diamonds, which were valued at $8 million. No word on whether or not they bore horrified facial expressions like fans were dying to see, but I’m sure they weren’t just lying around.

In fact, the only thing that really sours this episode for me is the fact that we won’t get much resolution to the Widmore arrival next week, simply out of the principle that we’ll probably be seeing what’s happening on the Hydra Island. After all, we haven’t seen Sawyer since “The Substitute,” three episodes ago. Not to say that his storyline’s not interesting, but after this episode? Man, we want some follow-up!

Overall, LOST proved once again to be a solid affair. A for the episode as a whole, A+ for Michael Emerson.