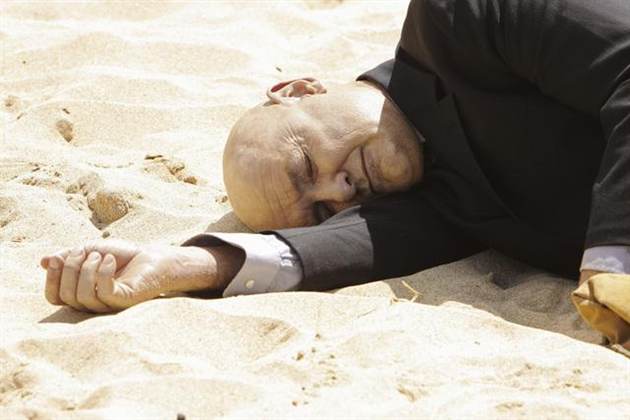 Any of the naysayers who claimed that “What Kate Did” was filler should be more than placated by the fourth episode of LOST‘s sixth season, “The Substitute.” The episode quite literally broke all the rules, and actually gave us more answers than questions — perhaps the first time in LOST‘s long history that this could be said for an episode. We’ve hit a turning point, folks.

That’s not to say that there weren’t questions posed. But, as executive producers Damon Lindelof and Carlton Cuse like to say, “All answers will lead to more questions.” And we got a hell of a lot of lead-ins.

Locke’s reset timeline finally gave some good to a character with a lifetime full of bad. He’s still in a wheelchair, yes — though he appears to be maintaining a good relationship with his father, oddly enough — but he’s still with Helen Norwood, his longtime girlfriend who left him back in the flashbacks of season two’s “Lockdown.” While she’s dead in the Island timeline (brain aneurysm), she’s alive and well in Locke’s reset timeline, and the two are set to be married. It’s nice to see Locke, happy, even though temporary stints to his happiness (i.e. being fired) are apparent.

Locke’s reset story was rife with other characters. In “Numbers,” we knew that Hurley had bought a box company in Tustin, but after Locke is fired by Hurley’s old boss Randy, Hurley kindly hooks Locke up with another job interview. Good ole fun time Hurley is still good ole fun time Hurley, Island or no Island.

Hurley in fact redirects Locke to a job interviewer (for those of you who didn’t know, that strange woman asking Locke what kind of animal he was was Lynn Karnoff, the psychic from the season three Hurley-centric “Tricia Tanaka Is Dead.” But Karnoff’s superior is Rose Nadler, who is still suffering from cancer, but still has the live-for-the-moment outlook she had in “S.O.S.,” when Bernard tried to take her to see Isaac of Uluru, a faith healer. Apparently, Rose and Bernard’s story hasn’t changed too much.

Finally, we saw an appearance by Ben Linus, who is a teacher of “European history” at the high school Locke substitutes at. After ranting about a coffee bag being left in the brewer, Ben introduces himself to Locke, and is very nice. In fact, he was nice in both timelines this episode, especially during his heartfelt apology to Locke for murdering him. I cried big fat Ilana tears.

But it wasn’t the reset timeline that was important. It was the Island timeline that really made the episode the epic answerfest that it was. Not only did we get a really cool shot from the perspective of the Monster (the cameramen call this the Evil Dead shot, as shown in the commentary for “The 23rd Psalm”), but we got even more answers about who exactly this mysterious Man in Black is.

Richard’s scared of him, very scared, even though the MIB is trying to get Richard to join him, which he has apparently been doing for a long time. Richard’s so scared, in fact, that he’s heading straight to the Temple, regardless of whether or not Sawyer’s going to join him.

Sawyer blows Richard off, instead choosing to remain with MIB, who came and fetched him at the Barracks with the promise of answers. And, despite Richard’s insistence that MIB is lying about the answers, MIB did lay some heavy ones on Sawyer. Some really heavy ones.

But before he could do that, he kept seeing visions of a little boy. It’s a great example of the show’s irony, especially considering that the Island’s apparitions are generally the MIB himself. But this time, it was a little blonde boy in medieval attire, warning MIB that he couldn’t break the rules by killing “him” (I’m assuming this is Sawyer). The MIB responds with the Locke-ism “Don’t tell me what I can’t do!”

John? Are you in there somewhere, John?

If he is, he’s buried deep, because the MIB gave Sawyer a short biography, stating that he had once been a man who could feel emotions, but he’d been trapped on the Island for so long that he’d forgotten what it meant to be free.

But after nearly losing Sawyer in a ladder climb down to a cliffside cave, we (and Sawyer) got the answers that we were wanting. In the cave there was a scale holding two stones: one black, and one white. MIB threw the white one into the ocean, tipping the scale in the dark’s favor.

He then proceeded to lead Sawyer into a cave that had the names of many, many people written on the wall. As soon as I can get screencaps of the wall, I’ll post them and we’ll investigate further. I couldn’t catch most of the names, but I could see the obvious ones, which hadn’t been crossed out. Those were Jack, Sawyer, Hurley, Sayid, and either Sun, Jin, or both. I presume Kate’s name was on there somewhere, since Jacob had touched her on the nose in that flashback. As a matter of fact, as many of you speculated, the survivor-touching that went on in the Jacob flashbacks in “The Incident,” were significant, and the MIB said (from his jaded point-of-view) that these touches were part of Jacob’s manipulation to get them to come to the Island. Why, because they were candidates, just like Ilana said Frank was.

What’s a candidate? Why, who Jacob wanted to replace him as protector of the Island, of course. Jacob probably won’t get a chance to finish his work on the candidate selection, but we’ll probably see the selection finished anyhow, especially after we saw Ilana mysteriously scooping up his ashes (apparently she doesn’t mind if essence of Jacob is mixed with essence of white tunic). MIB then revealed that Sawyer had three choices as a candidate: do nothing, accept the position, or help MIB go home. Sawyer, obviously, selected the latter. Because, you know, with Jack on the list, who else could it be?

Overall, this was by far the best episode of the season. “LA X,” had reveals, but “The Substitute” had bigger ones. And better ones, don’t you think? All in all, the episode gets a three thumbs up, A+.