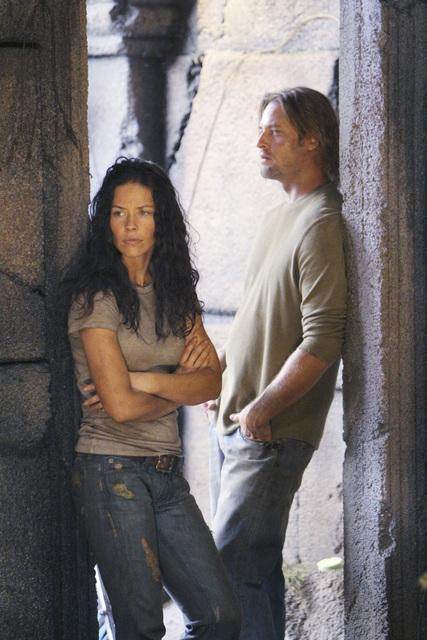 I know, I know, we can’t expect to have a lot of answers in every single episode of season six. But despite that, “What Kate Does,” the third episode of LOST‘s final season, felt slightly underwhelming to me. Sure, we got some cool reveals, but they were nowhere near as shocking or as informative as “LA X”‘s were. Don’t get me wrong, I enjoyed the episode, but it felt more like a season four episode and not quite like a season six one.

The Temple storyline was by far the most interesting an rich of the episode. After Sayid’s reawakening, Dogen and Lennon immediately have him whisked away to Dogen’s study (though not without opposition from Jack), where they proceed to torture him. First electroshock, then they burn him. Afterwards, an apologetic Lennon informs Sayid that he “passed,” but after Sayid leaves, he realizes that he wasn’t telling the truth: Sayid didn’t pass.

Lennon’s personality was developed quite a bit throughout the episode, and his sardonic earnestness is quickly making him my favorite new character of season six. Meanwhile, Dogen, while complex, is keeping too many secrets for me to really like him. Once he starts being open like he was at the end of the episode more often, then I’ll probably come to dig the character.

Speaking of Dogen’s openness, we got a pretty neat reveal of what happened to Claire, who we last saw on the Island sitting in what we thought was Jacob’s cabin with who we thought was Christian Shephard. As it turns out, Claire has been consumed by a “darkness” and is no longer who she “once was.” And the same thing’s happening to Sayid. But as for Claire, if this “darkness” means no more cries of “my bay-bee,” then I’m okay with that.

In fact, the only reason I shouldn’t like dark Claire was that she shot Aldo, a character who we hadn’t seen since season three. Played by It’s Always Sunny in Philadelphia‘s Rob McElhenney, Aldo was still angry about the “Wookie prisoner gag” that Kate and Sawyer had played on him in the season three episode “Not in Portland.” He’s quite bitter, and seems to relish having power over Kate, even though she overcomes him once again and escapes. He’s a classic case of a loudmouth who actually can’t get anything done. Great character, and I’m glad he got a better send-off than just never seeing him again.

Kate, after escaping from Aldo, went to the Barracks where she found a mourning Sawyer, who reveals that he was planning to propose to Juliet. There’s a lot of crying that goes on from both Kate and Sawyer, and in the end he tells her that he doesn’t want her around.

Meanwhile, in the “X” timeline, Kate is still in the taxi with Claire, and she’s desperate to make an escape. Things aren’t helped by Arzt spilling his luggage in the road in front of them, but Arzt’s luggage takes one for the team as she tells the cabbie (David H. Lawrence XVII, who does the most he can with the role) to run over it, leaving an indignant Arzt behind. At a red light, though, the cabbie flees the car, but Kate won’t let Claire go. Claire eventually does, though she leaves her bags behind. After getting a mechanic to help her with the handcuffs (whoever played that mechanic did a great job), she realizes that Claire was pregnant and goes back to return her bags, and even offers her a ride to the house of the people who were going to adopt her baby, though Claire is worried since they didn’t meet her at the airport.

However, the surrogate mother’s husband has just left her, and she doesn’t want Claire’s baby. The stress from this sends Claire into early labor, so Kate takes her to the hospital. And who’s the doctor? Why, Ethan Goodspeed, of course. It was good to see William Mapother again, though it wasn’t the first time he’s appeared on my screen this year — he was also in last week’s episode of Human Target. Ethan shows that he would have been a legitimately good person if it hadn’t been for the Island, making him a direct contrast to the survivors, who we’ve been led to believe have been made better by the Island. Nice dichotomy there.

Claire and Kate bond despite having been at the opposite ends of a gun only hours before, though Kate’s expression tells us that she’s having some sort of deja vu, especially when Claire calls the baby Aaron. The universes are connected, it seems, but how?

Overall, the episode was solid but not fantastic. However, next week’s episode title may mean a return to spectacular. “The Substitute” seems right on par with titles like “The Constant,” and “The Variable.” After all, what is the function of a variable? To be replaced with a substitute.

Overall, I give this episode a B+.