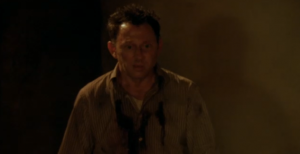 It’s with a mix of sadness and elation that I sat down to watch the first part of LOST‘s final season. After all, it’s the eighteenth-to-last hour of LOST. However, the sadness half of my emotions soon gave way completely to elation, as the hour progressed from good, to better, to awesome.

Before I begin my endless gushing of positivity toward the first half of tonight’s two-hour premiere (look for the review of the second half in only a few), I must express my one complaint, that was the replay of the scene leading up to the bomb’s detonation twice during the episode. While I admit this was an important scene, it was also quite tiresome to watch the second time around. We know what happened, already! We just want to see what happens next!

But other than that, the first episode was stellar, though it brought up its own little mystery with the fact that Faraday’s plan both worked and didn’ t work – at the same time. This nice little job by the writers of course brought up the mystery of how these two realities are running parallel to each other, but it also brought up the question of “Why? What purpose will the reality serve in the story?” That’s not a question born out of frustration, mind you. I fully trust the writers and their plan for the show’s final episodes.

The other great part about watching this episode (and the rest of the season) is that everything is significant. From here on out, there is no filler. Even season 5 had a bit of a filler with episodes like “Namaste,” and “Some Like It Hoth,” but these episodes are going to be pure character/mythology, and it makes me so, so happy.

Speaking of mythology, the episode brought a great moment of happiness during the 2007 Island storyline concerning Ben and the being that I’m now referring to as the “dark entity.” After Bram and his men from Ajira come in and shoot at the false Locke, Locke disappears. Then the smoke monster comes roaring in, killing everyone in the room save Ben. I was sad to see Bram go, as I like actor Brad William Henke, but his death served a great purpose: to reveal to Ben — and the audience — that Jacob’s nemesis, the man masquerading as Locke, is the same being as the smoke monster that we’ve come to know and fear over the past five years (See why I call him the dark entity? He’s both the smoke monster and the Man in Black — both symbols of darkness). “I’m sorry you had to see me like that,” the D.E. apologizes to Ben, but I’m not sorry at all. He gave us one of LOST‘s most underplayed (and yet one of its greatest) reveals to date.

Other great moments of the episode occurred often. While the reset had been hotly debated by fans, the biggest shocker wasn’t the scene showing Jack sitting on the plane in the slightly altered reality. No, it was the pan out of the plane window and down into the ocean, past schools of fish and sea life, and down to the completely submerged statue of Taweret’s foot. Best opening sequence to an episode yet? Probably the best since the opening scene of season two, when we met Desmond in the hatch.

Speaking of Desmond, our favorite brotha does pop up in the first hour, even though Henry Ian Cusick has not been shown as a main character in promotional items (funnily enough, his name  does appear among the main cast in the opening credits of the episode — right between Nestor Carbonell and Emilie de Ravin).

Other great moments included Sawyer’s foot in Jack’s face, the sad death of Juliet, and Jacob and Hurley meeting in the woods. However, when Hurley tries to tell the survivors about Jacob, Jack ignorantly asks who Jacob is, even though Jacob gave him an Apollo bar that one time. And don’t even bring up the return of Charlie. It was so wonderful to see him come back after his tragic death in the Looking Glass, and I hope we get to see him quite a few more times during the rest of the season, at least so he can explain his enigmatic line: “I was supposed to die.”

Again, you can expect a review of “LA X, Part 2” to come shortly. In the meantime, I give this hour an A+.