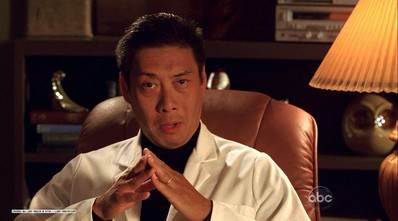 Sure, he can move an island, but can Benjamin Linus convince five morally opposite castaways to return to an isolated outpost of mystery and uncertainty? In 70 hours? He has to begin somewhere. In last season’s finale he starts by recruiting a drug addled and guilt ridden Jack. In this past Wednesday’s Season 5 opener, the two men, and the corpse of John Locke, begin a quest to convince the other Oceanic 6-ers to go baaaack to the island.

The episode begins similarly to the Season 2 premiere episode. This time there are two people sleeping, a married couple presumably, and they are awakened by a baby’s cries. The man, whose face remains obscured for as long as possible gets up, puts on a dusty Willie Nelson record, feeds the baby and begins his day. In a clever bit of foreshadowing the record begins to skip, and the scene cuts to the man, who we now know to be Dr. Chang (a.k.a. Candle, a.k.a Wickmund, a.k.a Halliwax) arriving at work, where he is about to make the Arrow Station orientation video. My best guess, based on what we know about the filming of the other videos, is that this is taking place circa 1980. There is an interruption, and Chang runs off to the Orchid Station. There has been an incident while drilling near to, as we know even if the workers don’t, the Frozen Donkey Wheel. Some drill bits were melted, and a worker is bleeding profusely from his nose. That’s almost never a good sign, especially on this island. For some reason, the good doctor tells the foreman everything about the proposed time travel plans. I would think that information would be on a need-to-know basis; the kind of thing you don’t go babbling about to just anybody. Maybe tell the guy, “Ok, stop working, it would be dangerous to go any further,” but then the viewers wouldn’t get the much needed exposition. By the way, Dr, Chang’s kind of a jerk. Also, Daniel Faraday is there. Yes, in the past! At the Orchid Station! We don’t know why, we don’t know how — yet. But it’s that extra special mind-blowing detail a Lost season premiere is required to open with, and it’s a pretty darn good one.

The show continues with Jack and Ben in a hotel room; catching up, cleaning up and plotting up a storm. Jack thinks everybody hates him, and Ben uses this guilt as a manipulation tool as effectively as you might imagine. Ben asks if Locke told Jack what happened to the remaining Losties after the island moves, and Jack says no. But we do know, because a flashback shows us the moments after the skies lit up over the island, three years earlier. Sawyer, Juliet, Locke, Rose, Bernard and the redshirts are all confused. The freighter’s smoking remains are no longer visible. Locke went from being surrounded by Others to being completely alone. The people on the beach are missing their camp. All their shelter, food and water is gone. Faraday returns to the beach and clears things up. Their things aren’t gone, they just haven’t been built yet. Oh, ok, then. No problem. This is the first time Sawyer and Dan meet. Sawyer seems less than impressed with him.

Back to the future: Kate and Aaron are having a lovely breakfast when they are interrupted by lawyers at the door, which is also never a good sign, no matter where you live. They represent a “Mystery Client” and they have a court order to acquire blood samples from Kate and Aaron to determine their relationship. Kate kicks them to the curb. She hastily packs a bag, grabs the conveniently stashed gun and money (someone knows how to plan ahead! She is Born to Run, after all.) Then she tells Aaron they are going on vacation and they hightail it out the door.

The producers have added a nice plotline touch for the ladies in the viewing audience (and I’m sure a few of the guys as well). Due to the fact that all their supplies went missing post-donkey-wheel, Sawyer has been rendered shirtless (and shoeless, ouch!) for the foreseeable future. He tries to bully the shirt off of Faraday’s back, which is hilarious to me because a) Daniel blows him off, b) I’m picturing Dan with just his tie around his neck, and c) I could see Sawyer putting on Dan’s shirt and ripping through it like the Incredible Hulk, except less green and more sarcastic. Failing to get the shirt, Sawyer next demands some answers and even though Dan doesn’t come right out and say “You’re too dumb to understand” he might as well have and Sawyer, finally reaching maximum levels of fed up, just slaps him. Daniel narrows the explanation down: He says that time is skipping like a scratched record and now either the island is moving through time, or they are.

Locke doesn’t have the benefit of an expert on time travel with him so he’s a little more confused, although he probably starts to get the picture when the Beechcraft Airplane that killed Boone back in Season One comes flying over his head and crashes in the jungle. Running to investigate, he gets shot in the leg by our old friend, Ethan. Before Ethan can shoot him again, another time jumps occurs. Like the Others earlier in the show, Ethan did not travel when John did so we are starting to get the picture that apparently it is only the newcomers that are leaping.

Sun is checking onto a flight to LA when she is pulled into a holding cell at the airport on the orders of Charles Widmore, who has some lessons for her on secrecy and respect. He ain’t happy about her approaching him in public, but he is interested in what she is proposing. Specifically the “kill Ben” part.

Meanwhile, right about the time Jack is heading out to get Hurley, the news reveals that he has escaped and is wanted for murdering the guy watching him outside the mental institution. Hurley is with the actual killer, Sayid, and they are getting back to their safe house when they are jumped by guys with guns and tranquilizer darts. Hand to hand combat ensues. Sayid wins, of course, and can now add to his resumÃ©: “Skills: Can snap necks with ankles, hurl henchmen from balconies, improvise kitchen appliances as a weapon.” If you haven’t seen it, Sayid knocks the feet out from under the guy and he lands square on his back, right on top of an open dishwasher rack loaded with steak knives pointing owie side up. Unfortunately Sayid does get hit with a tranq, and Hurley has to haul him out of there.

Back with the time dislodged Losties, they have gone to the Swan Station to see if they can garner some clues. They arrive at the blown up version of the hatch, so that at least gives them a general idea when they are. They get some ideas about trying to change the future at this point but Daniel emphatically explains to them that it doesn’t work that way. He compares it to a street. You can go forward, you can go back. But you can’t create a new street. He reveals he has been studying the Dharma Initiative for many years. 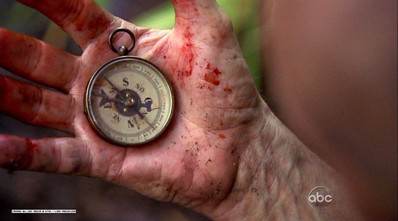 Locke has found the belly-up version of the Beechcraft. He is found there by Richard, who cryptically tells him that John himself told him to come help him remove the bullet in his leg. Or rather, will tell him at a later earlier date. Got it? Good. John doesn’t but apparently he will or Richard wouldn’t have come. Richard knows that the next time they see each other Richard won’t recognize him so he gives him the compass to prove to him that they know each other. He also tells him that to save the island he has to find the people that left. Then he just has to, you know, die.

When the Losties jump to a time when the hatch is intact, Sawyer heads for the back door to try to get some supplies, despite Daniel’s protests. Sawyer is tired, hungry and still upset over the loss of “everybody [he] ever cared about.” Juliet convinces him to head back to the beach. Miles follows them, leaving Charlotte and Daniel alone at the hatch’s back door. Dan is horrified to see that Charlotte’s nose is bleeding. He sends her back with the others, consults his journal, and then breaks his own rule. He talks to Desmond. He tells him that Des is unique, and that the rules don’t apply to him. He then tells Desmond to go to Oxford University and find Dan’s mother, but before he can tell him anything else, time jumps. Three years in the future Desmond wakes up with a start and tells Penny he has to go to Oxford. That ends Episode 5×01, “Because You Left.”

In the recap show that ran before the episode Damon Lindelof and Carlton Cuse state that Season 5 the show be heading down the path of answering more questions than it asks. This premiere episode still has it’s share of questions. For example, one wonders if there is a significance to the baby in the opening scene. Is the baby there to show us that they have not always had fertility issues? Is it there because it is the newborn version of one of our Asian characters? If that scene did take place in 1980, that was the year Sun was born. Miles is still mysterious enough to have any kind of back story. But mostly this episode was like the opening chapter of any story. It established the locations and situations of each of our main characters. It established the rules of time travel with enough emphasis to get it through our thick skulls, and it then transitioned into the second episode of the season.