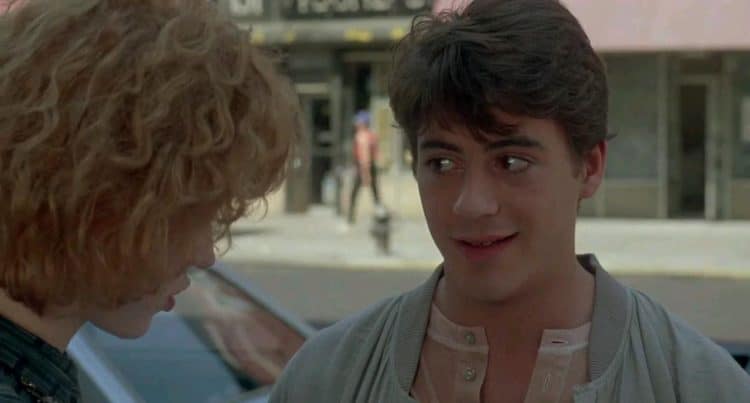 There’s been a lot of opportunity and desire to look at the past movies and shows that used to entertain so many in recent years and there have been quite a few reasons to do so. Whatever the reason, mention of these older movies tends to be to simply get people to take a look at them and remember why they were so great or interesting, and when looking at The Pick-Up Artist it’s not much different. But the cast for the movie was kind of nuts simply because of all the big and up and coming names that were involved as part of the cast. Those who are old enough to remember when Robert Downey Jr. was still a young man and not yet the guy that was known as little more than trouble on the Hollywood scene might recall this movie since he starred with one of the greatest actresses of the 80s, Molly Ringwald. The blank look that might come from folks that are too young to remember Ringwald, who is still around and still acting, is kind of priceless, since at one point and time she was one of the women that was widely known by many people, as were many of those that starred in this movie. If you don’t remember then here’s a little refresher that might make you laugh, since that the appearance of Lorraine Bracco playing a bimbo in a car, or Danny Aiello playing a diner owner, and even Harvey Keitel playing a gangster are hard images to forget. And if you forgot about Bob Gunton and that ridiculous accent, well, you might need to watch the movie again just to get a better look. Then you’d likely notice all the familiar faces that were present.

Perhaps one of the worst aspects of creating a movie that stars so many well-known names however is something that The Pick-Up Artist thankfully doesn’t suffer from. With too many well-known actors it can happen that those who are supposed to be the focus might slip out of sight as they get swallowed up by the rest of the cast, who are bound to do their job but will still detract from the overall story even it’s by accident. RDJ was already established back in that day, but one has to remember that he hadn’t reached the same level of stardom that he has now, which is to say that he was popular and easy to recognize, but his career was still in a place where he was known as a promising young actor that had done well for himself, but he wasn’t distinguished quite yet. That would come later when he’d been in trouble a few times. As of now, the world knows who RDJ is, but back in this time he was still known, but not nearly as well. Molly was known as well, but as part of the Brat Pack, she was considered to be part of a group that was more or less there to inspire the younger crowd, while many of the others in the movie were established actors that had been around for a while. It’s been kind of a treat to watch older and young generations of actors share the screen at times since every time it happens one almost has to think that there’s going to be mutual respect between the actors simply because they share a screen. But it’s also easy to think that the older actors will have a few things to say about, or to impart to, their younger counterparts.

It’s pretty natural to be honest when any mixed group of individuals gets together for any shared purpose, the older members of the group that are established and have the ‘been there, done that’ mentality will likely lean upon their experience and watch their younger counterparts with some interest. Even those that didn’t have that many years on their younger costars are likely to offer advice when possible or sit back and see if the younger actors are as good as people say. Of course, one drawback of having so many talented individuals in the same movie could be the possibility of a clash between opposing generations and a desire by some to outshine those next to them. This is usually a thought born out of paranoia, but it can happen and has a few times over the years. But even if it does happen the most important thing is that the cast is able to come together to complete the movie. That’s obviously what tends to happen, and it’s what happened with this movie as it came together to create an experience that a lot of people enjoyed and probably still remember. RDJ was able to be the smooth-talker that he’s been for so long, Molly Ringwald was able to be the intelligent and strong-willed individual she’s been for so long, and the rest of the cast filled in the gaps as they needed to along the way. Any risks that might have been incurred by bringing on a cast filled with names that might have attempted to bring their own importance to the forefront were minimal obviously since the movie was actually pretty enjoyable. Sometimes upstaging each other isn’t all that important when there’s a movie to be completed.