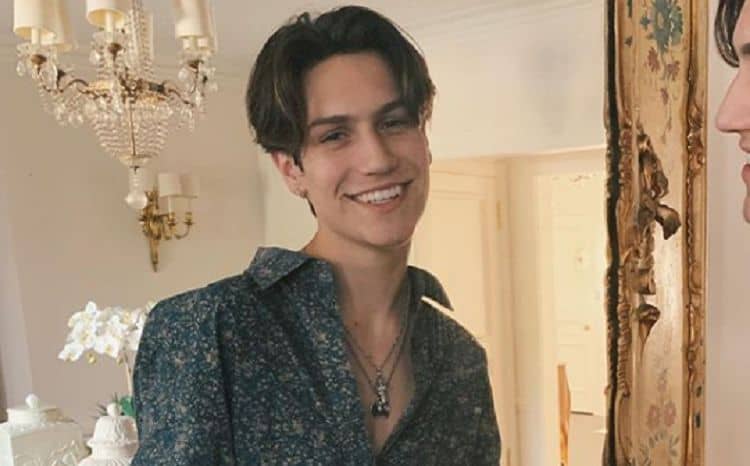 To add to the list of YouTube stars and Instagram influencers, a new generation of celebrities has arisen. It consists of young people in their teens famously referred to as e-boys. They are found online and have become an internet sensation thanks to the video making platform TikTok . E-boys are characterized by their hip fashion sense, chains, dyed hair, nail polish, and their stunningly good looks. If you are an avid consumer of TikTok, you have probably come across Lil Huddy on your TikTok Page. Lil Huddy is a famous e-boy who has gained fame from creating lip-syncing and dance videos on TikTok. With over 5,000 videos he has amassed a following of more than 11 million and over 500 million likes. Here are the 10 things you probably didn’t know about Lil Huddy.

Lil Huddy, whose real name is Chase Hudson, was born on May 15, 2002, making him 17 years old (as of this writing). He was born in Stockton, California. His father’s name is Cole Hudson, and his mother’s Tamora Hudson. Chase has two sisters Karissa Hudson and Marlena Hudson.

Before Lil Huddy was a TikTok star he made vines and dub smashes with his friends. Later, he joined Musical.ly which acted as a stepping stone to his stardom. He started small, making funny videos. Eventually, he started following some influencers who later became his friends. They would give him tips on how to get better at content creation. Before the app was acquired by ByteDance he had managed to acquire a following of over 100,000 musers. When TikTok became a sensation Chase joined the platform under the name Lil Huddy. He constantly uploaded dance and lip-syncing videos which became a hit. Now he boasts of a following comprising of 11.9 Million people and over 500 Million likes on the platform.

Chase also created a YouTube account under the name Chase Hudson in May 2018. The YouTube account has over 600,000 subscribers and 7 million views. His content mainly consists of Clothing hauls, challenges, vlogs, reaction and Mukbang videos with his friends. Because of his fame and influence on the TikTok platform, he has now been signed under one of the largest talent agencies in the world WME. The agency will represent him in the capacity of modeling, music, touring, commercials, film, and fashion.

3. Co-founder of the Hype House

Chase Hudson and Thomas Petrou came together and formed the Hype house. This is a luxury collective house located in LA. The house is made up of 19 members who are all famous TikTok stars. Some of the members include Charli and sister Dixie D’Amelio, The Wright brothers and Addison Rae. Of the 19 members, only four permanently live there. The rest of the members come once in a while to create content when their schedules allow it. The purpose of the house is to allow these TikTok stars to create creative content together. This has helped them gain more exposure and get more followers. Since the creation of the Hype House, the group has gained a following of over 7 million people with over 160 million likes. According to the Hollywood Reporter, The Hype House has also signed under WME. According to the New York Times, these collective houses are not a novel idea. They have been there since the vines Heyday. YouTube stars and influencers alike have embraced this trend and set up their own collective houses.

In April 2019 Chase made his relationship with Canadian star Cynthia Parker Instagram official. However, they broke up the same year. When asked about his current relationship status by the Hollywood fix.Chase admitted to dating fellow TikTok star Charlie D’Amelio. Charlie and Chase constantly uploads TikTok videos together. Charlie has a following of over 23 million followers, and over 1 billion likes. Making them the perfect couple.

One of the biggest downsides of fame is the hate and negative comments that come with it. Having gained such a large following Chase has had his share of haters. He has expressed his insecurities by confessing that he cares a lot about what people think of him, hence he tries his best to only show his good sides. He especially defined his love-hate relationship with TikTok and Twitter where he gets a lot of hate from trolls.

In an interview with Famous birthdays, Chase mentioned his role models include Justine Bieber, One Direction, Shawn Mendes, Bazzi, and K-pop group BTS. He also stated that Billie Eilish has influenced his style of baggy clothes which she constantly rocks.

Although he is still a teenager, Chase has a net worth of over $200,000. He has amassed his wealth as an influencer on Instagram where he has over 4 million followers. Due to popular demand from his adoring fans, Lil huddy has created his own merchandise and sells his products. His merchandise includes hoodies, t-shirts, phone cases and posters. These products are priced between $10 to 50.

According to his Instagram account, it’s clear that Chase likes dogs and cats as he is constantly posting them on his Instagram feed. In an interview with Hollywire, when asked what charity he would join, Chase said he would sponsor an animal-based charity – Particularly a charity to save Polar Beers as he loves them.

Chase aspires to become a singer. He has been working hard on creating new music. Now with WME having signed him, his aspirations seem within reach.

Besides singing and dancing. Lil Huddy particularly enjoys painting and baking. He even has a YouTube video baking with his mother called “COOKING CHRISTMAS COOKIES WITH MAMA HUDSON”.

By leveraging his passions in dance and music Chase has been able to soar to imaginable highs. This is a lesson to the younger generation that there is no one clear cut path to success. As long as passion and hard work are in play, success is guaranteed.