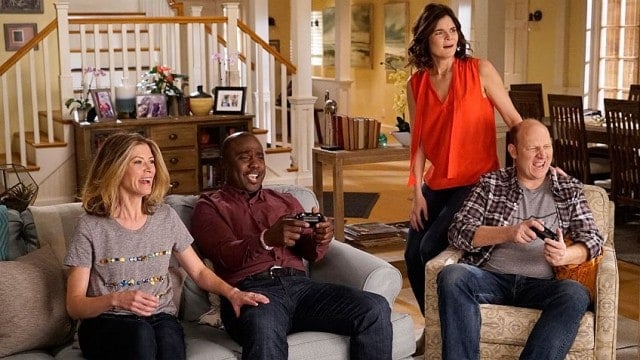 Life in Pieces‘ gimmick has worn out its welcome after a dozen episodes; at this point, it’s pretty clear trying to tell four isolated stories in the space of 22 minutes isn’t working. With basically five and a half minutes in each segment, Life in Pieces has approached each vignette not as a short comedy film, but a simplistic comedic set piece: when each plot can be boiled down to the two or three words in the title, it understandably can feel a bit thin, no matter what lens you try to view the episode through. Maybe it was just the name, but I was hopeful a Helen Hunt-directed episode might breathe some life into the show’s already-tired formula; unfortunately, only 1/4th of “Bite Flight Wing-Man Bonnie” is up to the task.

We can throw the “Wing Man” segment right out the window; there’s nothing grosser than an old man creeping on women in a craft store, even if its made ‘innocent’ by the fact he’s a grieving widow just trying not to feel lonely. A lonely old man doesn’t talk about tying up a woman he’s just met to her face – that kind of absurdist parody only makes the story feel creepier than it already does on a surface level. In fact, it’s so aggressively unfunny, it immediately ruins whatever good will this episode is able to generate from “Flight”, the one effective segment of this episode.

“Flight” works because of its simplicity; the segment immediately establishes Greg’s fear of flying on the same plane with his wife, which neatly clears the path for the fun little story that follows. I’ve reaped plenty of praise on Colin Hanks and Zoe Lister-Jones for turning the utterly predictable story of the “new parents” into something enjoyable; their work in “Flight” ranks among their best in the series so far, be it Lister-Jones’ physical comedy trying to hide from her husband on the plane, or Hanks trying not to stress about the emotional support dog sitting next to him. It helps the editing is up to par here for once, too: the usual jittery cameras and quick cuts help build the dichotomy between Jen’s relaxation and Greg’s anxiety, with a script that treats their flight to New York (for whatever reason; they don’t really even bother to explain)as almost a silent film of sorts – save for the hilarious stewardess on the plane, who can’t help but fawn after the disgusting pilot who flies her plane.

Capped by an image of the emotional support dog eating a cookie in first class, “Flight” really captures the goofy, lighthearted tone Life in Pieces tries to install in every story. Except in other stories, Life is trying to take this weightless approach with stories that deserve a little more care, be it the death of a spouse, an ex-wife returning to complicate a new, budding relationship, or a couple desperately trying to make friends. Instead, Life in Pieces takes the bull-in-a-china-shop approach, which doesn’t work when each story is rushing through itself to get to the next one: when Matt’s ex-wife shows up and challenges his deepening love for Colleen, it should be a BIG, challenging moment for the character, especially after his ex Bonnie opens an art gallery to restart their life together.

What do we get? We get Matt running to a spin class to tell Colleen he loves her, such a saccharine, flat way to end a story with such emotional potential as this one. Forget the generally low stakes of the other stories; Bonnie comes in like a fierce presence in the first two minutes of Matt’s segment, only to be dissipated like so much steam mere seconds later. It’s underdeveloped moments like those, moments that discourage any kind of deeper thought or engagement with the rom-com/family comedy tropes it presents, that makes all of Life in Pieces (save for the Jen/Greg scenes) feels so middling and ineffectual – from start to finish, “Bite Flight Man-Wing Bonnie” is a prime example of why Life in Pieces‘ formula just doesn’t work in its current form.

Life in Pieces returns with another weightless, ineffective quartet of vignettes.