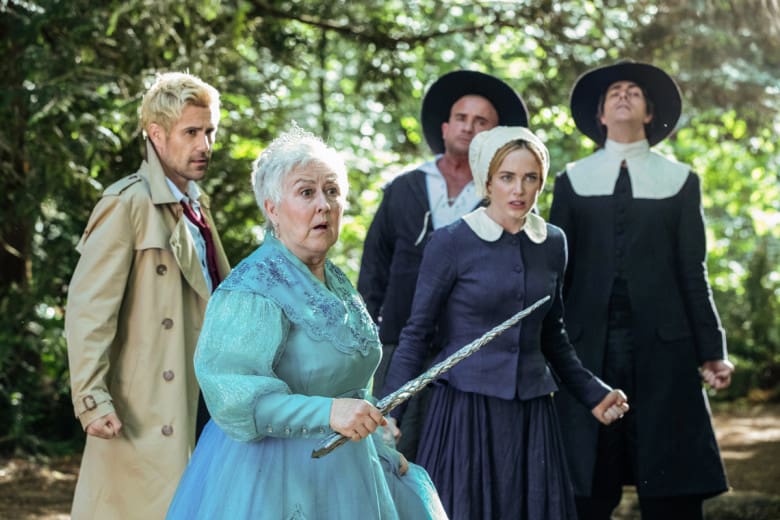 We all know the saying Hell hath no fury like a woman scorned. Well, on this week’s episode of Legends of Tomorrow, we meet a resentful Fairy Godmother who’s out for some payback. Oh, did I mention that it’s in the middle of the Salem witch trials? Yeah, things are about to get magical. Literally.

The fact that the episode centered itself around the witch trials intrigues me. On the one hand, it gives Matt Ryan to use more of his Constantine expertise and the sarcastic dry-wit humor that he’s incorporated into the character. On the other, it gives an insight to what fear of the unknown can do to people. The residents of Salem never saw anything new or innovative. All they have known is a simple way of life and God.

Granted, if there’s even the slightest hint of innovation, it is seen as witchcraft and the solution for that is to condemn the person responsible either by hanging or by burning them at the pyre. I was hoping that the villagers would listen to Zara when she tried to tell them that there’s nothing to fear from the unknown. That the priest was wrong in convincing them that witchcraft is evil or that it relates to the Devil.

I felt great sympathy toward Prudence Hawthorne. The villagers accused her mother Jane for performing witchcraft and the priest swiftly ordered her execution. I understand the emotional turmoil that Prudence is going through. She is about to lose everything and she ends up forming a bond with the Fairy Godmother. I first thought that the elderly fairy is on the side of good. In reality, she is anything but. She ranted to Constantine later in the episode that all she does is give and give with nothing given to her in return. That and living alone in an alternate dimension for who knows how long does things to a person’s psyche. Nevertheless, I personally don’t get her stab at Cinderella’s glass slippers when she’s the one who gave them to her in the first place. Well, according to the Disney version of the story anyway.

Meanwhile, Nate shacks up at the Time Bureau like it’s his personal hotel. He almost gave Ava a heart attack when she was working on some paperwork late into the night. Guess when you are working to save the world from evil magical creatures and the like, you don’t earn much doing it. At least now he has a chance to mend fences with his father, who apparently, is part of the secret government project to fund the Time Bureau. Speaking of Hank Heywood, the dinner scene was nothing short of awkward. Both father and son tried their best to be civil but it ended up being a semi-heated shouting match when Nate failed to pay the bill. Somehow I don’t think the restaurant accepts ancient currency, Nathaniel!

Back to the witch trials, Zara got herself caught once again trying to save Jane. She used her powers to take down the villagers who want to arrest her and in letting her rage take over, she almost killed them. Zara then came to her senses and listened to Jane’s advice about forgiveness, which coincidentally, is what the Bible teaches (not that I’m the religious type). Jane then escapes a fiery death, Prudence got her mother back and the Fairy Godmother sent to Hell where she belongs. Though Constantine did give her a chance to bound herself to him she wouldn’t take it on account of the Hellblazer is more damned than she is. Have fun in Hell, Godmother!

I knew I recognized the Fairy Godmother’s voice! It’s Jane Carr who voiced Mama Cosma from the Fairly Odd Parents cartoon. It did take me a moment to place her voice though. It’s been a while since I’ve watched the cartoon series.

The part where Nate held Piggy Ray in his arms waiting for him to turn back to normal is amusing. I can imagine Mr. Heywood’s surprise when Ray finally turned back to normal and Nate transformed into Commander Steel. Looks like your son finally did something with that History degree, hmm, Mr. Heywood?

Another Amusing Moment: Constantine and Mick bicker over the littlest things. They’re like roommates who give each other a hard time because they felt like it.

Sara’s Puritan wordplay is chuckle-worthy. It’s a tad too much, but chuckle-worthy nonetheless. That and Ray’s Myth-teries. I lol’d.

The scene where Nate did not want to go through the portal to take him back to the Waverider was a bit bittersweet. Is he leaving the Legends to take Ava up on her offer to work at the Time Bureau? He did say that he wanted to give dinner with Dad another go, maybe that’s why he’s choosing to hang up the cape as it were?

Point of Inquiry: Now that Zara’s totem is kind of ruined/melted, how is she going to fix it? Ask Gideon to make a new one? I don’t know how this works. Oh, and since when can Nate understand pigs? He can magically understand Ray when the latter was turned into a pig. I do not compute.

Sweat-drop Moment: When Constantine asked Gideon to mix those odd ingredients together. What does he think she is? A magical AI that can do anything that you ask her to? Also, the book bound with human skin? That’s just downright creepy. Then again, there have been historical instances where that is the case. I’m not going to Google it though, save myself the nightmares.