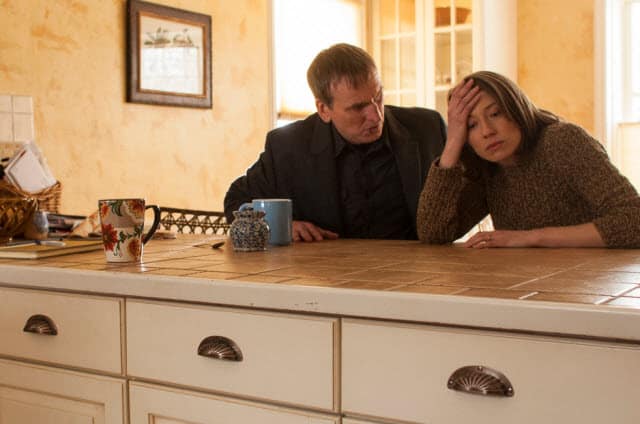 After two episodes of focusing mainly on Kevin Garvey and his family, The Leftovers shifted its focus onto a previously lesser known character, Reverend Matt Jamison.  We learned much more about Matt’s childhood and present troubles in this one hour than anyone else so far, including Kevin.  This shift in storytelling perspective is very reminiscent of the early seasons of Lost, where each episode would highlight one individual character’s past (and later future/parallel lives.)  It would be great if The Leftovers kept each episode focusing on one specific character more than others because there are plenty of complex Mapleton residents (and beyond) that are all guaranteed to have interesting pasts.

Matt was only briefly seen in the pilot episode at the remembrance parade handing out fliers that exposed the truth about some of the Departed people.  Now it seems his church is being foreclosed by the bank, and he has no way of coming up with the $135k to keep it.  He goes to visit Nora Durst, who’s apparently his younger sister.  Through their conversation we gather that the church was left to him by their deceased parents.  Matt went to Nora to ask for the money to save the church because he thought she’d have benefit money from losing her husband and children.  She sees this current financial crisis as a sign that he needs to stop printing his papers and refuses to help him, even before he turns nasty and spills the truth he learned about her cheating husband, Doug.

Matt’s intentions with his papers are an interesting study.  At one point he explains to a casino manager that someone has to be responsible and expose the truth of only some of the Departed because “if we can no longer separate the innocent from the guilty, everything that happened to us – all of our suffering – is meaningless.”  On one hand, I can understand that he wants to expose the bad seeds of the bunch who disappeared, but on the other hand, what he’s doing is extremely offensive to others, including his sister.  Even if it’s true that his brother in law was having an affair with his kids’ teacher, then what’s his explanation for why the kids (and all otherwise innocent people) were also taken in the Departure?  It’s no wonder he’s getting all these angry people violently attacking him, even if the truth about their loved ones hurts.

Once again animals are seen as mysterious beings.  When Matt is at the casino to investigate the case of one Departed man who allegedly cleaned out his kid’s college fund to gamble it all away, he sees pigeons on a game table.  Eventually he remembers that Kevin Garvey Sr. had buried some money for him in his yard and digs that up.  On his way back to the casino, he sees pigeons again sitting on a red traffic light and takes that as a sign.  God and/or luck was on his side that night because he was able to turn his $20k into $160k by betting on red at the same table the pigeons visited earlier.

After he’s won all the money he needs and more, he’s sitting out in his car with the doors unlocked and almost gets the money stolen.  He’s attacked by a man who was watching him gamble all night, and a switch goes off in the Reverend.  If you were keeping track, this is the second beating he’s taken in this one episode alone.  He gets up and punches the guy’s face to a pulp before taking his money back.  I almost wonder if the guy is even alive after that because Matt really lost control on him.

On his way home in the morning light, Matt sees a car throw rocks at Guilty Remnant people standing on a sidewalk.  He immediately stops his car to call an ambulance for help just as the car doubles back and knocks him out.

Matt wakes up in the driveway of his church with no more blood or scars on his face.  I was fully expecting him to walk into his own funeral in the church, but instead we got a weird perspective on his life through this wild dream, beginning with his childhood.  He was sick as a child apparently, and his parents died in a fire which he and his sister survived.  He’s either harboring feelings for Laurie or has a romantic past with her because he fantasizes of sleeping with his wife who turns into Laurie.

The one possible truth to come from his dream sequence is the explanation about his wife Mary’s condition.  It’s likely that they were really in their car on the 14th when the Departure occurred.  Ever since then, Mary has been unresponsive and needs round-the-clock care.

Matt finally wakes up in the hospital and rushes to make it to the bank by 5pm.  Only when he gets there, he finds out he’s been unconscious for 3 days and it’s too late to save the church.  Miraculously, the money was still in his car so at least he’ll be able to pay his wife’s nurse for now.

Tensions between Matt and the GR, Patty in particular, will be interesting to see going forward especially now that they’ve bought out the church from him.

What did you think of this episode?  Do you prefer this style of focusing on one character at a time or are you happy to see next week looks to be back to the Garvey family show?