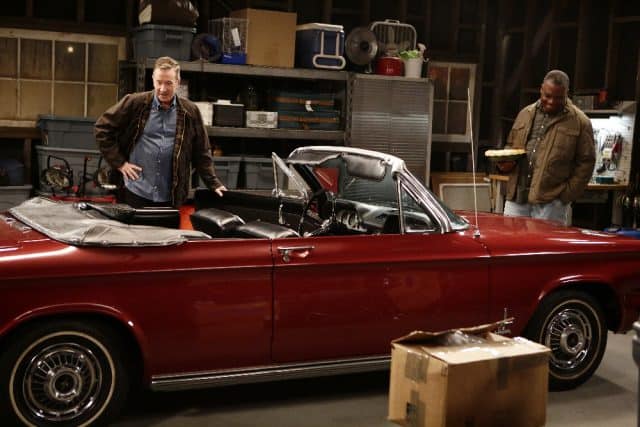 Last Man Standing, in its old age, seems to have gotten a bit emotional. It’s not a bad direction to take things, at all. Really, it makes the characters feel more human and relatable. As the show goes on, it has only gotten better at telling emotional stories that are still funny and true to character, which has turned out to be one of my favorite things about it.

This week on Last Man Standing: Chuck’s dad recently passed away, and left Chuck a classic car that they worked on together. Mike wants to buy the car from him, but so does Joe (Guest Star Jay Leno), and it quickly turns competitive. Kyle tries hard to be integrated into the family during the Thanksgiving holiday. Eve, Kristin, and Ryan have an uncomfortable encounter due to their new living arrangements.

Because I’m insecure, if I had a relationship like Mike and Chuck’s, I might wonder to myself every single day if we were actually friends. Friends that I count on are people that I can talk to about important, emotional things, and who come to me with those same things. That said, this was a huge step forward in the bromance that is Mike and Chuck. I mean, it’s always been pretty obvious to viewers that the two men ar e fond of one another, but they’re just too “manly” to admit it. There’s nothing wrong with being this way. Lots of men in the world are like this, I just happen not to be one of them. But what’s really important in this relationship is that it’s growing. It doesn’t just stay stagnant. However slowly, the two men are opening up, and it’s so uncommon to see positive relationship growth on TV today, and I very much appreciate it.

I also appreciated the parallel between Ryan/Eve and Mike/Chuck. Both are relationships with rough exteriors but really have softer fondness for one another. I’m not sure how I would’ve handled Ryan’s situation, but really when it developed, it simply became clear how much he cares for Eve. As a man with many a sister-in-law, I can relate.

The show is aptly titled Last Man Standing, as Mike is often adrift in a sea of women. But it’s nice to have some of the emotional plots geared toward the men for a change, bringing Chuck, Ryan, and Kyle to the forefront. The whole cast is quality, but especially when they visit these emotional stories.

Chuck inherits a classic car from his father that Mike and Joe would both like to buy, on this week’s strong episode of Last Man Standing.